An Australian engineer has developed a cheap, 3D-printed carbon device that uses absorbed light to fire neurons and restore sight to those with impairments.

A renewable energy researcher searching for a way to explain a concept stumbled on an idea that he has developed into a potentially huge breakthrough in sensory implants.

“I was teaching a physics for biologists course, and made an offhand comment that to physicists, the body is really simple. You’ve got a computer chip as your brain, you’ve got all these wires, and the rest of it is just a carbon-based semiconductor,” University of Sydney researcher Dr Matthew Griffith told create.

“I had this moment where I realised hang on a minute — I work with carbon-based semiconductors in my solar cell work. Where in the body do we use things which absorb light and create electronic charge? That is essentially what the eye does.”

Since hearing bionic ear inventor Professor Graeme Clark give a talk while he was at university, Griffith has always been inspired to take on large problems. Now, with the advent of low-cost manufacturing through 3D printing, and cross-disciplinary research, he believes that he’s on to something big.

“There’s no artificial retina technology on the market today that can achieve colour vision,” Griffith said.

“We started investigating this idea by just growing neural cells, which are responsible for signalling in the human body, on these organic semiconductors and really excitingly, we found that we could actually communicate with the neurons using our organic semiconductor materials.”

Looking at the body as a computer

Griffith began experimenting with carbon-based semiconductor materials because they are an avenue towards very low-cost manufacturing technologies.

At the heart of his research is that the biological world uses charged molecules for its communication.

“You need a material which can translate between these two electronic languages, electrons and ions, and these carbon-based semiconductors transmit both types of signals,” he said.

Making individual pixels to start reading the light signals is the most difficult task.

“The first challenge is to get yourself some sort of spatial grid, and so for that you need a drop-on-demand printing technique that is capable of making very small dots, in the order of 10 to 20 microns,” Griffith explained.

“Then it really becomes materials engineering. Can you make an ink, which for instance, only absorbs red light and generates lots of charge, which can translate to the neuron and cause it to fire? Then you need to do it for green and blue. Once you have the inks, then you have to control the nano structure.”

This task is more difficult, requiring precisely controlled molecular structure in the order of 10 to 20 nanometres.

Bringing it all together is biomedical engineering to put the device into the body — signalling the retinal ganglion neurons in the eye to grow onto them and to attach — something that Griffith and his team are still trying to solve.

“Our idea is that these are basically water-based inks, so we can load these things up with things called neurotrophic growth factors, which is a signal beacon for neurons,” he said.

“So, when you implant the device inside the body, these neurotrophic factors start getting released from these pixelated arrays, and that tells the retinal ganglion cells in the eye where to go, and where to attach in order to make contact with the implant.” 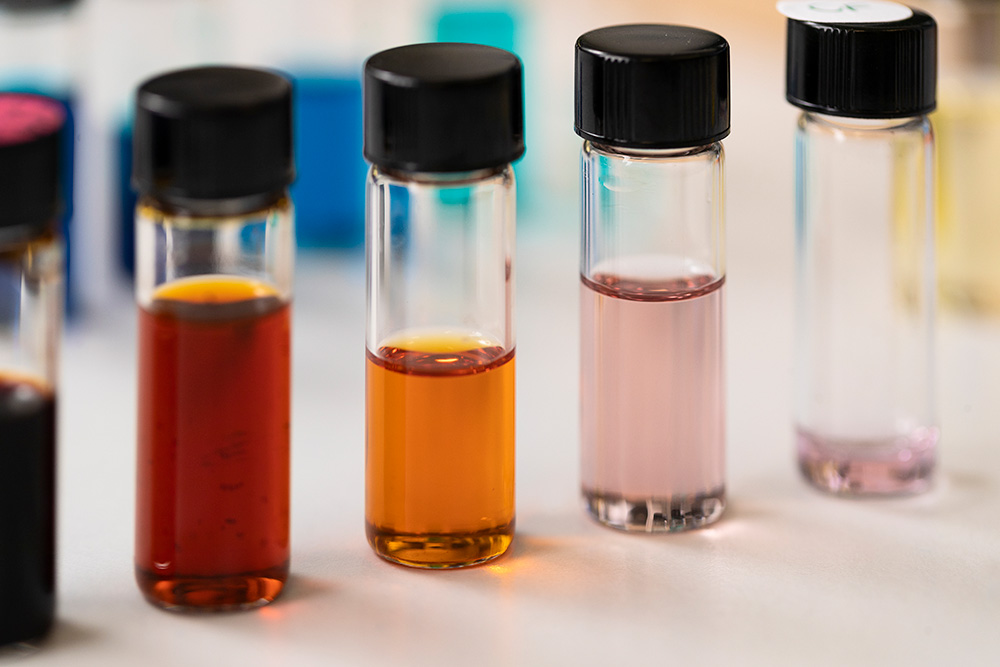 For Griffith, the biggest issue in developing this technology wasn’t scientific. It was a strategic approach to research and getting the right multidisciplinary team together, which took about a year.

While the team still has work to do to complete the retina device, they’re already beginning to look at further applications for their idea.

“At this stage, we think that any medical condition which comes from a problem with interfacing with neurons, and in particular sensory neurons, has the potential to be addressed with this technology,” he said.

For example, it could theoretically be used to bridge the gap in sensory neurons in a spinal cord injury. Griffith is also looking into how it could be used for pain management — telling neurons not to fire on certain signals.

“We’re also very interested in neurodegenerative diseases like Parkinson’s disease or epilepsy. Basically, the shaking associated with these diseases, or violent seizures, is when neural pathways in the brain start firing off in a way they are not supposed to,” he said.

“There’s the potential for these devices in the brain, if we can locate exactly where the problem area is and exactly what the neural signal needs to be. If someone is having an epileptic fit, it could detect that and change the way that the neurons in the brain are firing, so that we return the person from their seizure state to their healthy state.”

Griffith thinks that the artificial retina could go to clinical studies over the next three-to-five years.

“We don’t have a device we can put into people today — that end goal is around five-to-10 years away, but we’re making really promising strides,” he said.

How a ‘humble tinkerer’ accidentally invented the pacemaker

For engineers who become new parents, times are changing

For engineers who become new parents, times are changing