Is Australia innovating in the defence sector?

The Australian Federal Government is investing heavily in the defence sector, and IP filings are a great litmus test for whether or not this investment is having an effect, writes Mark Pullen, Principal of Watermark, a specialist Intellectual Property law firm.

The funding plan enables approximately $195 billion of new investment in Australia’s defence capabilities, with $29.9 billion more to defence for 2025-2026 than previously planned.

The Australian Federal Government is clearly investing heavily in the defence sector. The Next Gen Tech Fund, managed by the Department of Defence: Science and Technology (DST), is set to invest $730 million by 2026. The Next Gen Tech Fund focuses on research and development in emerging and future technologies for the “future defence force after next”.

To enable this, the Department of Defence (DoD) has established the Centre for Defence Industry Capability (CDIC). The CDIC creates an interface between the DoD and businesses, creating opportunities to engage with prime contractors or directly with the DoD.

The Department of Defence has also initiated the Innovation Hub, where Australian and New Zealand companies, businesses, and academic and research organisations can collaborate and determine the potential for real-world applications for their innovative technologies.

Patent filings are a great litmus test for whether or not federal funding and opportunities for business, academia and other organisations to engage with the DoD are having an effect.

Of course, some technology relevant to the defence sector will also fall within other classes and might not be classified within F41 or F42. Indeed, some technologies might remain secret or confidential, and might not even be the subject of patent applications. However, as an initial measure of whether government funding is driving innovation for the defence sector in Australia, classes F41 and F42 are a useful place to start.

This table charts the growth of patent filings globally in the defence sector in classes F41 or F42 between 1900 and 2018.

It is important to note that publication of patent applications typically lags behind initial filing (and therefore the initial development of new technologies) by approximately 18 months, hence the incomplete data for 2016. However, what is clear is the strong growth in patent filings in the defence sector since the 1960s and increased acceleration in growth over the past two decades.

History tells us that “necessity is the mother of invention”, and the 1914-1918 and 1939-1945 World Wars show some growth in patent filings, as might be expected. But the growth over the past two decades far exceeds what might be considered a general trend of prior years.

Since 1988, the number of patent families per year in the defence sector have grown steadily, from 3138 in 1988 to 5331 in 2017. Each patent ‘family’ can contain one or several national patent applications.

One might expect the number of patent filings each year in Australia, particularly since 2016 with additional government funding and programs coming on-stream, to show a significant increase year-on-year.

Here’s a look at the number of patent applications specifically in Australia based on country of origin.

It is interesting to note that the steady increase in number of filings originating from the US decreased dramatically after 2003, likely caused by the global downturn in the early 2000s.  Recovery to those higher patent filing numbers is proving to be very slow.

The significant players in this military technology arena are perhaps unsurprising: the US, the UK, Germany, South Africa, Sweden, France and Israel. 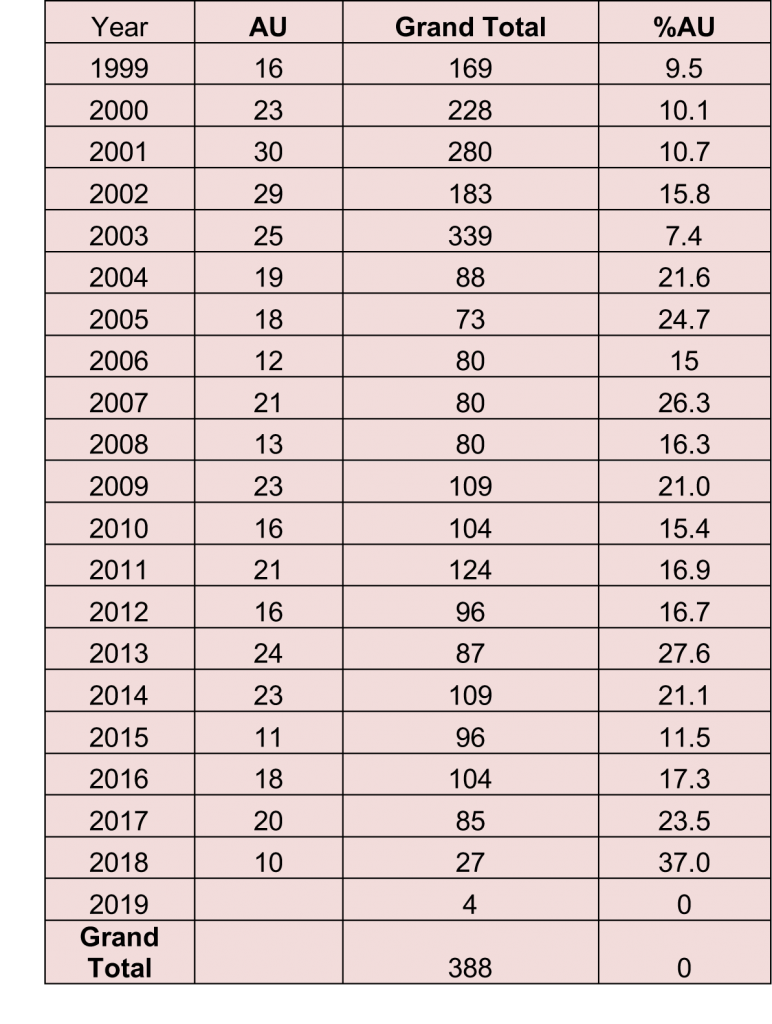 Clearly, at least from the perspective of patent filings for military technology covered by this article, Australia remains very much a net importer of overseas technology. Home-grown innovation in this space is showing signs of lagging behind the investment and opportunities presented by government or, in reality, government supported funding and programs are difficult for organisations and businesses to access.

It might be that Federal funding is supporting Australian businesses and organisations to innovate in areas of more general technology with civil as well as military applications, such as cyber security tools and medical devices (medtech).

With a general underutilisation of the Australian patents system by Australian entities and individuals, one concern is that IP assets are not being beneficially valued or managed, and that government investment might well leach away without realising the maximum potential value for the Australian economy.

The defence sector is a prime candidate for investment and jobs growth. Intellectual property as valuable asset protecting and supporting sustainable growth for Australian businesses in the defence sector should both be on the agenda for government and non-government organisations alike.

Protect your creativity, ideas and innovation by speaking to a Watermark team member. Watermark has launched a hybrid chatbot and livechat as an avenue for you to connect with IP lawyers and Patent & Trade Mark Attorneys. Visit watermark.com.au to safeguard your IP today.

How one engineer built her career on turning challenges into opportunities

What do the 2019 NSW election results mean for engineers?

Mark Pullen is a Principal of Watermark, a specialist Intellectual Property (IP) law firm. Mark holds an honours degree in physics and is a registered patent and trade marks attorney for Australia and New Zealand. He served as a marine engineer in the Royal Navy and as a patent examiner in the UK Patent Office (UKIPO), and Mark is also the Vice President of LESANZ and Chairs the WA Innovator of the Year program evaluation panels.

What do the 2019 NSW election results mean for engineers?