The team wins coveted university scholarships to study at UCL Engineering in London and of course the bragging rights of being World Champions.

Hydron also won the Best Engineered Car Award, the Fastest Car Award, and the Ashes trophy in a competition against the UK. They were also nominated for three other awards: Scrutineering Award, Best Pit Display and Best Application of Project Management.

“When we set out, it was our dream to come to the World Finals, and here we are now; it’s crazy to think how far we’ve come,” says Will Johnson, Team Principal. “We can’t believe we’ve done it. It’s not one person; it’s a real team effort. The teamwork, the relationship between us and our shared ambitions all going for one thing make it so unique.”

"We've put in so much work, late nights, staying back at school, and getting through to the end was a big challenge, but it's paid off for us. We're just over the moon!"
Will Johnson

The team’s teacher, Peter Clinton, praised the group’s work ethic: “I am so proud of Team Hydron’s achievements,” he says. “Their solid work ethic, ambition, and enthusiasm towards excelling has paid dividends by being awarded ‘best in the world’.

“I believe a teacher should lead by example, to inspire, extend and challenge students to do their best and strive for excellence. A teacher’s role should be to guide and coach students to learn from best practice examples, support and encourage students regularly, and outline areas that could be improved.

“Every teacher that the students have interacted with along their journey has played a role in each individual’s development, culminating in World Championship success,” he says.

This multi-faceted STEM competition embraces enterprise, design, engineering, marketing and teamwork. Formula 1 is at the heart of the initiative, with students across the globe forming F1 teams in miniature to design, make, test and race an F1 in Schools car. The cars compete on the 20-metre racetrack at speeds of around 75 km/hr.

Teams compete regionally and nationally, with the best winning a place at the Aramco F1 in Schools World Finals.

Just as in the sport of Formula 1, teams push the boundaries of the rules and regulations in their determination to produce the best car, putting many hours into testing and perfecting them, and paying close attention to detail in the visual identity of their team. 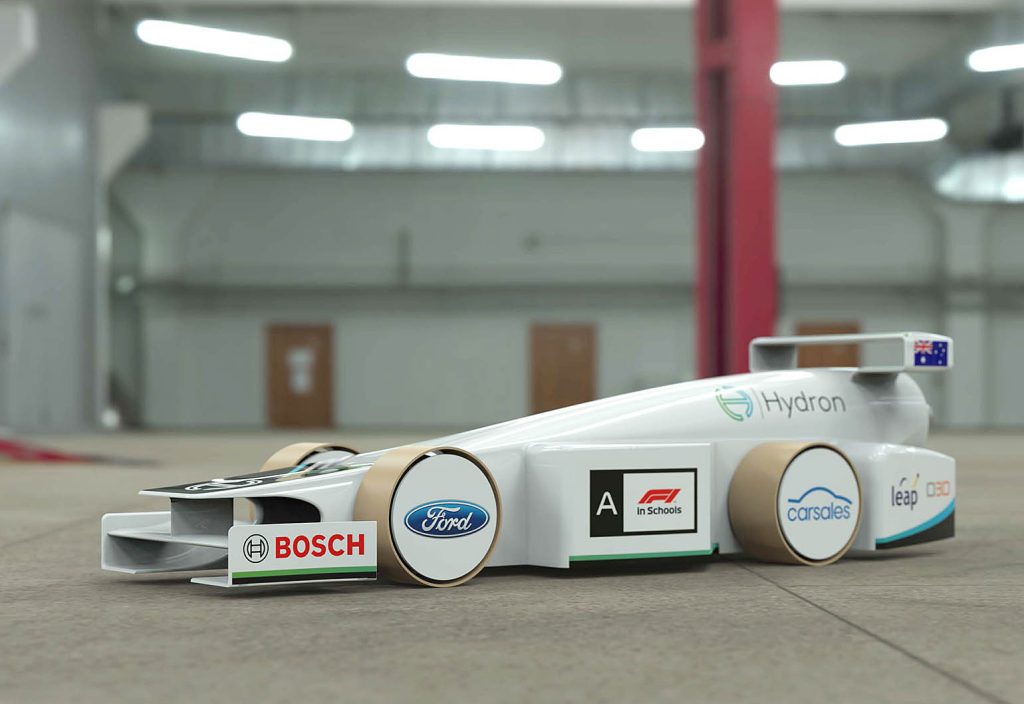 A bright future for Australian engineering

Hydron was not the only member of Team Australia. They were accompanied at the event by:

Over the course of the competition’s 17-year history, Australian teams have come away with the top prize seven times. Throw in 6 second-place and 5 third-place finishes, and it’s clear that STEM teaching in Australia is capable of producing world-class engineers.

"The level of Engineering analysis these students undertake is world-class by any measure, and there would be few engineers in Australia who could not learn a great deal from these students."
Dr Michael Myers

F1 in Schools is a program managed in Australia by the Re-Engineering Australia Foundation Ltd (REA).

“The level of Engineering analysis these students undertake is world-class by any measure, and there would be few engineers in Australia who could not learn a great deal from these students,” says Dr Michael Myers, Chairman of REA.

“We are proud of the achievements of all the teams, especially the teachers who guide their journey of discovery and the schools which allow their desire to take on the world to flourish”.

About F1 in Schools

In the competition, student teams from around the globe design and develop a scale model F1 in Schools car with advanced engineering and produce highly creative and instructive presentations of their teams.

F1 in Schools puts STEM education into context with its parallels to the real world of the sport and broader industry. It makes learning more relevant, engaging and exciting with its supportive, competitive environment.

This Formula 1-supported global STEM programme is a proven route to motorsport and automotive careers with former participants working in Formula 1 teams, engine manufacturers, sports agencies and many more allied companies. It also provides the sport a unique platform for promotion to the younger generation.

When did you know you were an engineer?

Rowan is the Digital Editor for create. He is excited to share the stories of great engineers with the world. In his spare time he's either exploring virtual worlds from the comfort of his couch, or the real world with his family.

When did you know you were an engineer?