Australia’s coasts are riding the next wave of renewable energy

Australia’s renewable energy family is gradually getting bigger as engineers and coastal scientists combine their efforts to advance the wave energy industry.

Australia’s coastline is gearing up for a new generation of wave enthusiasts.

But far from sporting surfboards and towels, the newest offshore fans will be armed with cabling, turbines, buoys and other forms of technology that don’t usually form part of a day at the beach.

The efforts form part of Australia’s fledgling wave energy industry, which, with other renewable energy industries like solar and wind power, offer a greener alternative to the country’s power needs.

Western Australian company Bombora Wave Power is currently advancing its own mWave technology, which sits on the seabed 10 metres from shore and takes advantage of the waves’ subsurface pressure.

The brainchild of brothers Glen and Shawn Ryan, mWave is a 60-metre-long structure consisting of air-inflated rubber membranes mounted on a concrete structure.

As the waves pass over the device, the pressure near the sea floor changes due to alterations in the water column above it, deflating the membrane.

The air is then pumped into a delivery duct equipped with check valves to create a one-way air flow, after which the air is pumped into a turbine with a variable-speed generator that converts the rotations into electricity.

mWave is placed oblique to the waves to harness both the wave front and its length, and, due to the device’s dimensions, it experiences the trough and crest of the wave at the same time, with some rubber cells at low pressure while others are at high pressure.

The technology has gone through years of rigorous testing in laboratory tanks and, in 2017, a two-year mid-scale trial was completed in Melville Water in Western Australia with a device one-eighth the size of the normal mWave.

Late last year, Bombora moved its headquarters to Wales to collaborate with marine energy experts and engage the international supply chain network to help deliver a large-scale 1.5-megawatt device that could generate approximately 2100 megawatt hours over a full year of operations.

They are six months into a two-and-a-half-year program and they expect to deploy the technology off the coast of Pembrokeshire, in the southwest of Wales, by the end of next year or in early 2020, he said.

Leighton said the mWave is quite cost effective compared to other wave energy technology, because its position on the seabed prevents damage from storms or by being hit by boats or marine life.

Elsewhere in Perth, renewable energy company Carnegie Clean Energy is advancing its own wave conversion technology in the form of subsurface buoys named CETO. The technology harnesses the physical movement of the buoy.

Its latest iteration, CETO 6, has three connections to the seabed, enabling it to absorb a wave’s surge motion as well as the heave (up and down) and pitch (forward and aft tilt).

Measuring 20 metres in diameter, CETO 6 can capture three modes of motion, whereas CETO 5 used one connection to capture only the wave’s heave motion.

Carnegie Chief Executive Officer and mechatronic engineer Jonathan Fievez told create that tuning the system to resonate with the waves in multiple modes of motion improves the economics significantly.

He said that CETO 6’s second major difference is that they have moved all of the conversion equipment inside the buoy.

CETO 5 had equipment such as accumulators and check valves on the seabed, which converted the linear motion from the buoy into hydraulic energy, sending that to shore via a subsea pipeline where it was converted into electricity.

“The benefit of doing it all in the buoy is in the maintenance, because lifting heavy equipment on and off the seabed is troublesome,” Fievez said.

“With CETO 6, the seabed footprint is also reduced, as there is minimal equipment on
the seabed.” 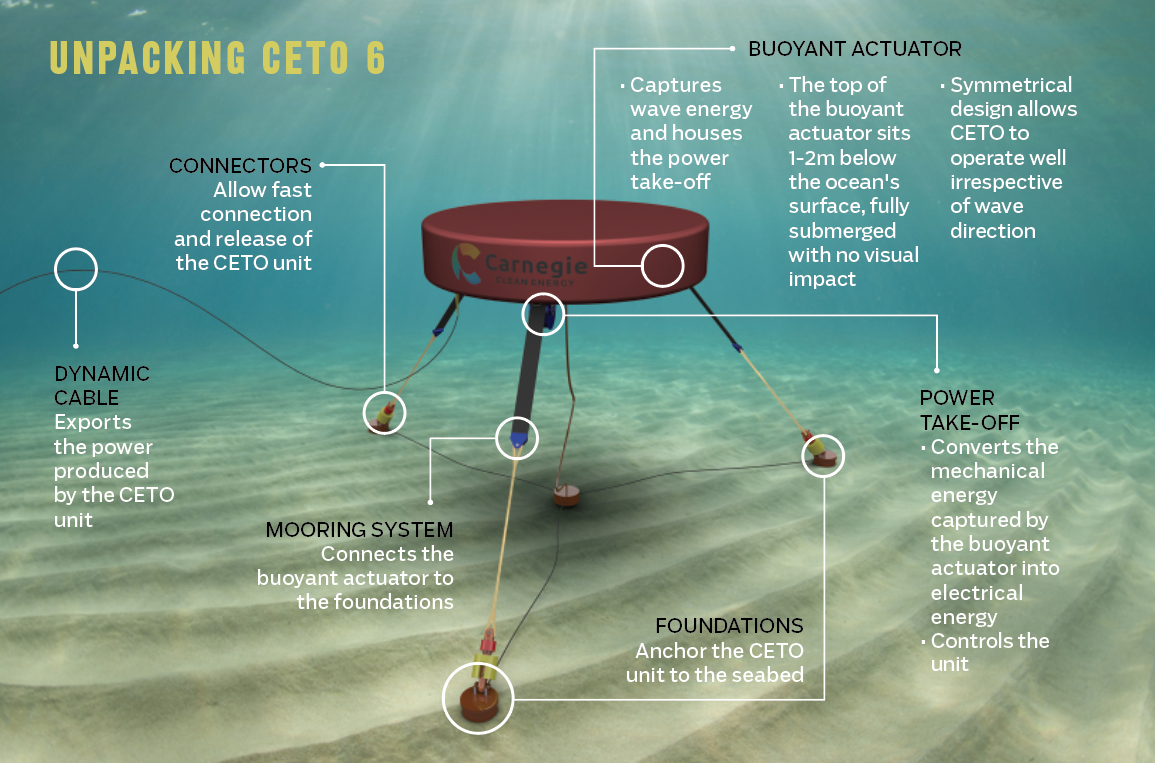 CETO 6 is still in the design phase, but Carnegie plans to deploy a single buoy with a capacity of 1.5 megawatts off Albany in the southwest of Western Australia.

The deployment will run alongside Carnegie’s efforts to develop common user infrastructure at Albany consisting of a power grid connection, onshore substation, subsea cable and foundations that can be used by Carnegie and other wave energy companies.

The $15.75 million tender is part of the Government of Western Australia’s plan to turn Albany into a hub for wave energy research and industry testing.

Fievez said the biggest industry challenge going forward is to reduce the cost of the technology so that wave energy companies can sell electricity at a cost that is near enough to the rest of the market to drive investment toward rapid expansion of the project scale.

“We are continually working on a number of ways to do that, but the most exciting avenue is through artificial intelligence and machine learning, which is very well suited to wave energy,” he said.

“The nature of neural networks is well suited to the narrow intelligence required to increase the accuracy and speed of key calculations.

“Those calculations predict waves in space and time, predict forces on structures that are subjected to waves and, finally, optimise those forces to extract the most energy out of each wave.”

Fievez said they are working with leading experts in the field to address those challenges, but the opportunities to exploit AI in this field extend far beyond.

In addition to the Western Australia Government awarding Carnegie a tender to construct common user infrastructure in Albany, it has also given the University of Western Australia (UWA) $3.75 million to establish a Wave Energy Research Centre.

Based near UWA’s existing Albany campus, the centre brings together ocean engineering researchers to support Carnegie’s wave energy project and, in the long term, establish Albany as a world-leading education and research hub for marine renewable energy.

The centre’s research focus stretches across three disciplines, including geotechnical engineering, by investigating how to attach the technology to the seafloor via cost-effective and efficient foundation solutions. 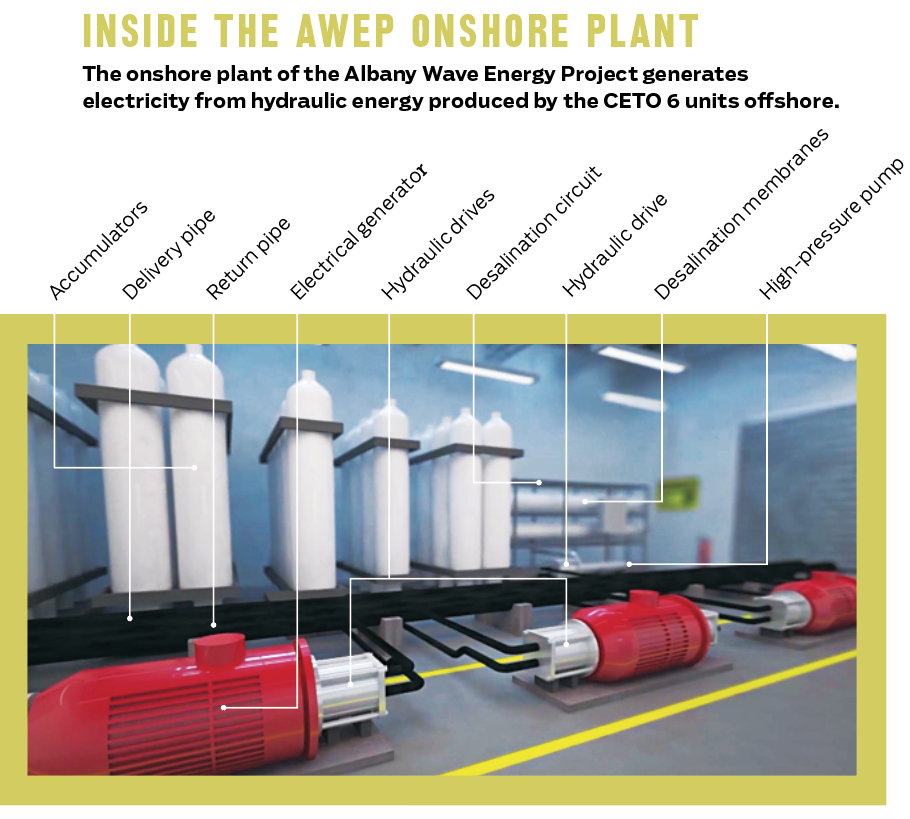 Earlier this year the centre hired three postdoctoral researchers with backgrounds in ocean engineering and expects to make future opportunities available for engineers as its scope broadens and additional funding for instrumentation and staff becomes available.

The centre’s manager, Dr Wiebke Ebeling, said one of its biggest challenges will be in securing sustained funding for ongoing research.

“This centre has an amazing opportunity to highlight how modest seed funding can establish a capability in regional WA that fosters a multitude of ties with other industries, government entities and education,” she said.

This article originally appeared as “Riding the wave” in the December 2018 issue of create magazine.