Inside the countdown to Australia’s first homegrown rocket launch

With most of the three-stage commercial vehicle already manufactured, and final testing and assembly underway, Gilmour Space Founder and CEO Adam Gilmour sat down with create to discuss the rigours of qualification, carrying satellites, and the future of the Australian space sector.

Qualification for an orbital space rocket involves a series of intensive testing and rehearsals on the ground, including functional and environmental assessments of all major rocket systems, components and structures.

“When rockets go up, they’re very shaky,” said Gilmour. “So, one of the big things you do with environmental testing is put parts of the rocket on a shaker table and simulate the vibrations of launch.” 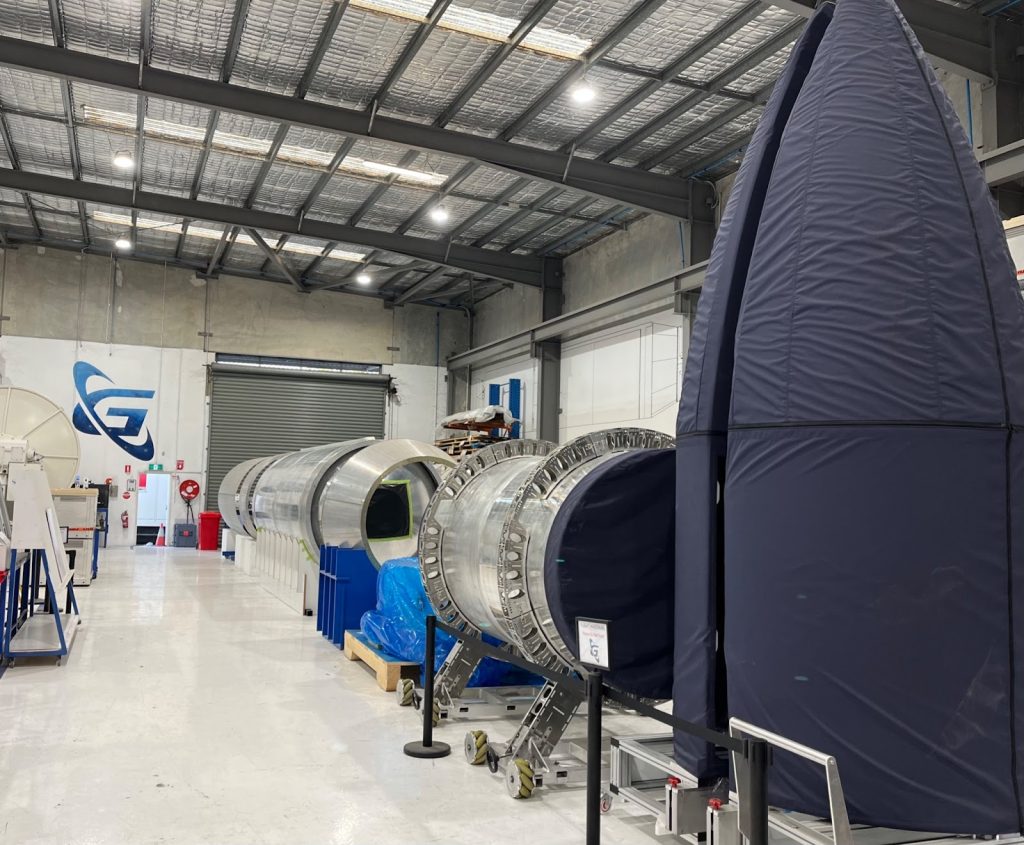 Thermal testing is similarly essential for simulating the “cooking” and “cooling” effects in space, depending on the position of the sun, and testing the heat transfer from the rocket motor.

“You can also put the rocket components into a vacuum chamber to simulate the vacuum of space,” said Gilmour.

Assembling the rocket is another mammoth task for the team, with more than 3,000 components making up the launch vehicle, and is anticipated to take up to 3–4 months.

When the final assembly is complete, Eris will be taken to the launch site in Bowen, north Queensland, for more system-integrated functional tests, including engine testing and other electronic assessments.

“We’ll do a full ‘wet-dress’ rehearsal, [where] we fill it up with all the fluids and ensure that the valves, for example, are working as expected,” Gilmour said.

“We are building a second vehicle pretty close behind the first one, as we want the ability to recycle pretty quickly.

“Should there be a failure or anomaly, we’ll conduct an investigation to see what went wrong, fix it and then have another go.”

While the first and second stages of Eris will be powered by Gilmour Space’s lower-cost hybrid rocket engine, the company’s newly-created liquid rocket engine, Phoenix, will kick into gear in the third.

Testing the Phoenix engine in May 2022

Phoenix was designed and manufactured via 3D printing in Australia, and as of 13 October, is fully qualified for use.

“It has a regeneratively cooled engine, meaning fuel goes through little tubes down the outside and then back and into the top of the [combustion] chamber, keeping the rocket motor cool,” Gilmour said.

This innovative method allows the propellant to boil before reaching the chamber, meaning the rocket can continue running for longer periods of time.

“[Specific impulse] is very important in rockets, because the more efficient you are, the less fuel you need to generate a certain amount of thrust,” said Gilmour.

What’s next for Eris?

But it is expected that much of Gilmour Space’s technology will be translated into its larger vehicles, with work already begun on a new rocket – Eris Block 2. More fitting for customer demands, this vehicle could be Gilmour Space’s bread and butter.

“Block 2 can take 1,000 kilograms up, so you can [bring] a lot of satellites up at a time,” said Gilmour. “We’re also working on a booster stage for Eris Block 2, so you can take payloads to the moon.”

“We want to offer a full-service capability, from launching to anywhere in the solar system to [developing] reasonably large satellites that can be used for myriad applications.”
Gilmour Space Founder and CEO Adam Gilmour

The Block 2 vehicle will also facilitate Gilmour Space’s dedicated rideshare launch, called Caravan-1, which Gilmour said will “provide affordable access to new space customers looking to launch into a mid-inclination orbit at the end of 2024”.

Next in the works is another next generation vehicle – Eris Heavy. Capable of taking 3.5–4 tonnes to LEO and big enough to carry a human spaceflight vehicle, Eris Heavy will form the early stages of Gilmour’s crew vehicle development.

“With Eris Heavy, you could put an entire LEO constellation up in a single plane,” said Gilmour. “You could also take satellites to geostationary orbit, and humans to space if we wanted to develop a capsule.”

Australia set to be a major space player

With the government injecting funds into the sector via its $1.3 billion Modern Manufacturing Initiative, of which Gilmour Space was a recipient, Gilmour thinks Australia is finally warming up to space exploration.

“There’s probably going to be about six or seven countries that are the main space players and I think we can be one of them,” he said.

“We want to offer a full-service capability, from launching to anywhere in the solar system to [developing] reasonably large satellites that can be used for myriad applications.”

By the end of the decade, Gilmour hopes Australia’s investment in the sector grows, making it possible to send Australian astronauts to space.

“We’ve got a good base of technology already, entrepreneurs who are super ambitious, and a government that’s starting to deploy capital – so I think the pieces of the puzzle are coming together.”

Brick walls and firewalls: Cyber engineering is an essential

Chloe Hava is a Sydney-based freelance journalist. She writes for various publications across a number of different industries, including pharmacy, human resources and the small business sector.