An innovative building technique has helped erect an award-winning addition to the Melbourne skyline quickly, quietly and safely.

Street closures have become a common occurrence in Melbourne’s CBD while crews build the infrastructure and property assets required to meet the demands of a booming population.

You would assume the construction of a 43-storey tower on La Trobe Street — home to RMIT University, Melbourne Central railway station and two busy tram routes — would spell months of traffic chaos.

But what if much of the building were assembled off-site?

The tower in question is Atira Student Living. At 150 m high, it is one of the tallest buildings in the world to use prefabricated construction methods and has been recognised with a Construction Award of Excellence by the Council on Tall Buildings and Urban Habitat.

Thanks to some innovative engineering, Atira was completed in just 24 months, representing a 30 to 40 per cent reduction in construction time compared to convention building methods.

HBS is patented technology that allow prefabricated buildings to be constructed to greater heights than other modular techniques are capable of reaching.

Hickory is an Australian pioneer in modular construction. However, its Chief Engineer, Shan Kumar, prefers the term ‘prefabrication’.

“When you say ‘modular structure’, the banks get scared,” he said with a laugh.

“When you say ‘prefabricated structure”, they are happy.

“I think the problem is that when people hear ‘modular’ they think of cheap Lego parts clicking together, but there’s actually no difference between a conventional structure and a prefabricated structure. What I am doing is slicing a building into parts that can be lifted into place and then stitching them together on site.”

The reality is a little more complex and, in the case of Atira, it involved the testing, construction and transportation of 285 HBS modules.

The longest one delivered to site was 17 m long and weighed 26 t. The largest prefabricated components were trucked to site on La Trobe Street at night to avoid major traffic disruption.

The 783-bed Atira building includes a series of terraces, lounge areas and other communal spaces where students can study and socialise.

It also features 629 Sync bathroom pods — another Hickory innovation. All pods were pre-fitted and finished with plumbing, lighting, joinery, and wall and floor coverings. When completed, they were craned into position on site.

A key difference between HBS and the more refined version used for Atira is the use of tongue joints — the stitches Kumar uses to fasten Atira’s modular slabs together on site — and the use of temporary rather than permanent load-bearing elements.

“On a 43-level structure, you need more precast elements to carry the load and, as a result, some of the steel columns become redundant,” Kumar explains.

“We decided to make all of the columns temporary props so that we could recycle them.”

While some structural walls and off-form finished architectural elements were completed with in-situ concrete, the majority of Atira’s elements — including the floor slabs, core and shear walls, façade and bathroom pods ­— were prefabricated in Hickory’s factory in Melbourne’s inner west.

The factory environment reduced downtime in inclement weather and improved safety by reducing the need for construction crew to work at heights.

“The main objectives are quality and safety,” Kumar said.

“The building is factory-produced, so it’s actually a 43-level structure that’s built on the ground floor. People don’t need to be working up on level 43 to do the fixings. It took about an hour [to deliver each module] from the factory to the construction site, but it took less than five minutes to put each module in place.” 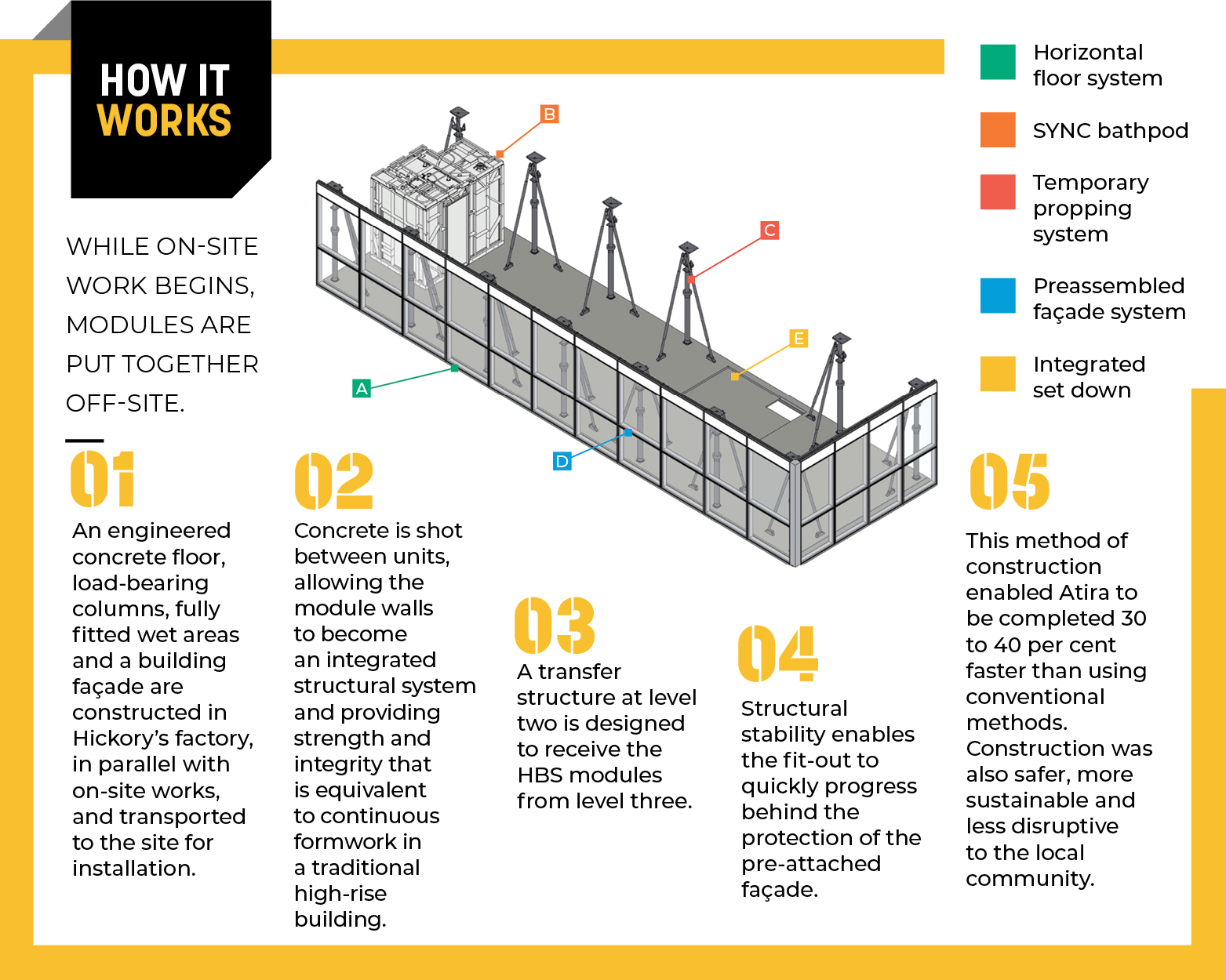 Kumar said the engineering challenges came down to the building’s design.

The tongue joints were tested at Swinburne University’s Smart Structures Laboratory, and prototype testing was completed in Hickory’s factory.

But Kumar said the greatest challenge was one of communication and belief.

“We had to convince the architects that this system could work for Atira,” he said.

“The other challenge related to on-site problems because it takes time to educate the construction crew. Project managers were sceptical when we first started. Now they all love it.”

A positive mindset is something that structural engineering practice Rincovitch brought to the project, along with a depth of technical expertise.

“Everything has to be 100 per cent coordinated prior to installation,” he said.

“There is very little margin for error.”

“It will reduce fragmentation across the industry,” she said.

“It will also reduce construction costs and time, improve quality, and reduce waste.”

She said that load tolerance is the key technical challenge of prefabrication.

“A prefabricated building has a lot of different components,” she said.

“How do you manage tolerance so that each element can come together successfully?”

Kumar said tolerance was a key consideration for Atira’s façade. He also describes it as the most innovative feature of the building.

In a conventional tall structure, the floors are built first and then a protective screen is applied so workers can build the core.

For a building of this height, about 18 floors would have been built before starting on the façade.

In the case of Atira, the façade was attached to the modules from the very beginning.

Kumar is chuffed by Atira’s recent award; however, he is equally satisfied that he proved the sceptics wrong.

These included representatives of Melbourne City Council, who initially rejected Hickory’s request for a night-building permit.

“We went to the Victorian Government and explained that night-time work would be better from a logistics perspective,” Kumar said.

Victorian Premier Daniel Andrews visited the site and requested that the council provide a one-week permit to allow Hickory to test the theory.

“On the first evening of work, I was standing next to a very serious man from Melbourne City Council and when our first module went up at 7.15 pm, the noise was like a spoon tapping on glass,” Kumar said.

“He turned to me and laughed, and I thought, ‘Ha! We’ve got him!’. And, of course, our building permit was extended.”

Another Australian building to be recently recognised by the Council of Tall Building and Urban Habitat (CTBUH) is Emblem, a 22-storey residential tower in the Sydney suburb of Waterloo.

The building received an Award of Excellence for Best Tall Building (100 metres and under). CTBUH, a global non-profit organisation, presents awards to projects that have made extraordinary contributions to the advancement of tall buildings and the urban environment.

Emblem features a façade of interlocking forms and mirrored voids to enable views, natural light, ventilation and garden spaces that extend vertically through the main tower lobby and upper floors.

This article originally appeared as “All the pieces fit” in the June 2019 issue of create magazine.

One 'origami engineer' is giving the ancient art a modern twist

One 'origami engineer' is giving the ancient art a modern twist