Electric buses are taking over public transport of the future

A ride on an electric bus might be a novelty now, but before the end of the next decade, almost half the world’s bus commuters will be boarding sustainably powered vehicles.

According to a recent report by Bloomberg New Energy Finance (BNEF), the number of electric public buses in use globally will almost triple from the 2017 figure of 386,000 to approximately 1.2 million by 2025. This will bring the proportion of electric buses on the road around the world to 47 per cent.

While the upfront costs to purchase an electric bus are currently more than those of their gas and diesel counterparts, the report also found that expected reductions in battery prices could make them competitive with diesel buses in less than 10 years.

BNEF also stated the cost of fuelling and maintaining an electric bus over a lifetime is already less than gas and diesel vehicles.

According to BNEF analyst and report author Aleksandra O’Donovan, China will lead the push for battery-powered public road transport. In the next seven years, the world’s most populous nation will be home to 99 per cent of the globe’s electric buses.

“China will lead this market, due to strong domestic support and aggressive city-level targets,” O’Donovan explained. 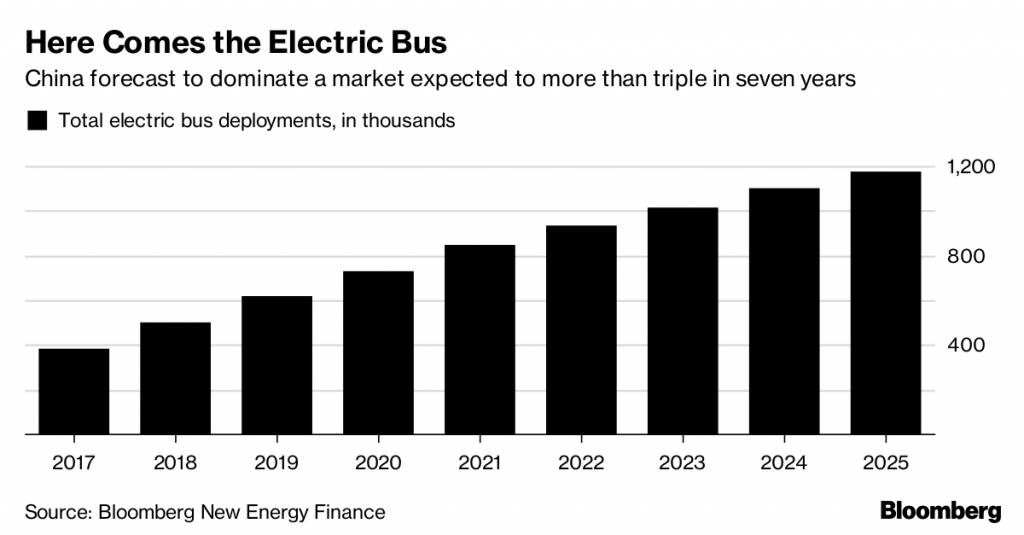 The electric vehicle market leader in China, BYD, has already taken advantage of the government’s backing of the sector. Last year the company sold 128,000 electric and hybrid electric vehicles, an increase of almost 28,000 from their 2016 sales.

Other nations are set to follow China’s lead. In January, mayors in the US state of California urged the state’s environmental regulator to introduce incentives to increase its clean bus fleet.

European cities including Paris and Amsterdam are also working towards cutting their public bus emissions to zero.

According to BNEF, bus fleets are a prime candidate for electrification due to their fixed routes and key role in urban transport architecture.

In Australia, many cities are implementing or trialling electric bus technology in line with global efforts.

In June last year, the first Australian-built electric public bus was commissioned by South Australian company Precision Buses. This was the first of two electric and two low-emissions buses funded by a state government grant of $2 million.

According to former South Australian Minister for Manufacturing and Innovation Kyam Maher, the project was designed to help workers transition to new roles leading up to the closure of General Motors Holden.

“This project demonstrates how capable our automotive workers are, with skills that can be used in advanced manufacturing and other industries,” Maher said.

The ACT government is also running a 12 month trial (at the cost of $900,000) of two Carbridge electric buses and a hybrid Volvo bus to compare their performance to that of the existing conventional fleet.

Perth in Western Australia is one of only three cities in the world to pioneer the NAVYA electric Autonom, which is not only electric but fully automated as well.

“Volvo has electric chassis in development and actually in service in Europe, which we are planning on bringing to Australia at some point in the future,” he said.

And, according to Carbridge CEO Luke Todd, the lower operating costs of electric buses will pay for themselves in four years.

“We have plans to roll them out across the country,” he said.

Where are all of the pro bono engineers?

Where are all of the pro bono engineers?