Why more engineering firms should tap the benefits of cultural diversity

Getting to the top is always tough, but when you are a woman from a different cultural background, the task can seem impossible. Just ask Mayuri Nathoo, a project manager with a global engineering firm.

Making your mark in a male-dominated profession like engineering is never easy for a woman. It’s a challenge Mauritian-born Mayuri Nathoo faces regularly in her role as a project manager in the Sydney office of global engineering and infrastructure advisory company Aurecon.

“There are deeply embedded stereotypes and it’s a challenge to constantly try to overcome these barriers. I have a different appearance and accent, so there is a judgement before people meet you,” she said.

“When I completed university, I was very surprised to see little cultural diversity in the women in senior positions within the organisation and across the wider engineering industry. It left me feeling uncomfortable as I couldn’t easily relate to those leaders or see myself becoming one of them.”

It was a similar story for Diversity Council Australia (DCA) chief executive, Lisa Annese, the daughter of post-war Italian migrants.

“I always saw women who became successful as being white with an Anglo-Celtic background. Growing up I thought only a certain type of woman became successful in Australia and even now that is predominantly true,” Annese said.

“You need to work on creating a bond and bringing ideas to the table to show you are a valuable member of the team,” Nathoo added.

With only 2.5 per cent of ASX directors culturally diverse women, these impressions are unsurprising and they were among the key findings in a recent report by DCA and The University of Sydney Business School.

Cracking the Glass-Cultural Ceiling studied the experience of 366 culturally diverse women in Australian organisations and found the ‘double jeopardy’ of gender and cultural background locks many women out of leadership opportunities.

“The issues facing these women include ingrained systemic barriers and mindsets that facilitate the reproduction of bias,” said the report’s co-author Dr Dimitria Groutsis.

In Australia, senior leaders are assumed to be dominant, tough and assertive, with culturally diverse women not viewed as possessing these attributes, explained Annese.

“If you don’t look like the typical white male, or have the typical leadership style, there is an unconscious bias against you,” she said.

This view of leadership is familiar to Nathoo.

“Engineering is a very male-dominated industry. When I walk into a meeting, I am often not seen as a leader due to my gender and appearance. Women are deemed not to be strong leaders and if you have an Indian appearance, even less so.”

Organisations adhering to this idea of leadership are overlooking a key talent pool. The report found culturally diverse women in Australia were ambitious and capable, with 88 per cent of survey participants planning to advance to a very senior role. Despite this, most reported feeling invisible and undervalued, or a ‘high risk’ leadership contender.

“You need to understand the local community if you are going to develop a strong sustainable solution, otherwise it will not work or last,” she said.

Working on the Melbourne Metro Tunnel, the project team’s cultural diversity was key for innovation.

“We had a very collaborative team and brought together the best minds from across the world, including the UK Crossrail project,” Nathoo said.

“Without cultural diversity we would not have achieved the range of ideas and solutions we delivered.”

To take advantage of the innovative skills culturally diverse women offer, the engineering profession will need to evolve. 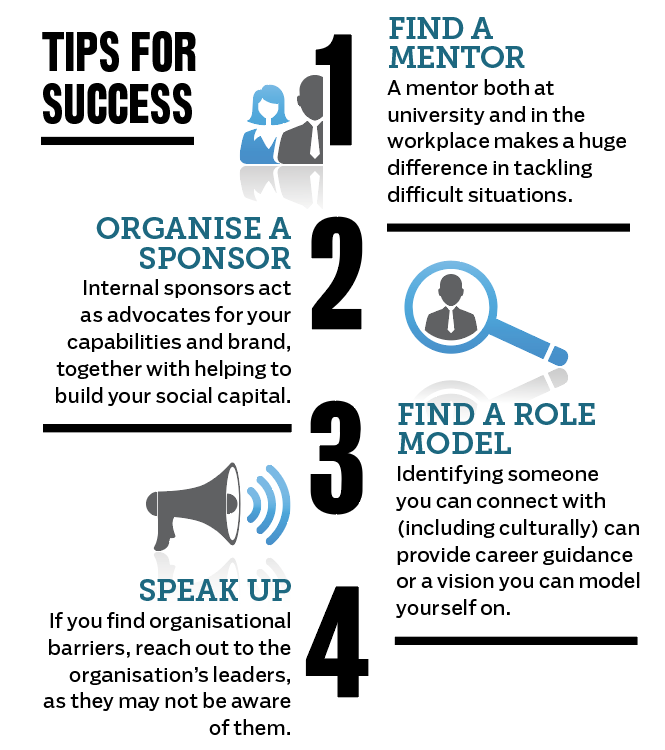 “It’s time the perception changed that engineering is just for males. In my civil engineering degree it was only about 40 per cent female and all my project groups were all male,” Nathoo said.

With around 25 per cent of entry level engineering students coming from overseas, a changing cultural mix is also something to consider.

“These graduates translate into the pipeline for the industry, so organisations need to think about how to encourage culturally-diverse people into their businesses to ensure they capture this talent,” Nathoo said.

And, as the McKinsey figures showed, it can also result in better organisational effectiveness.

Living sea walls give marine life something to hold onto

Helping Nepal rebuild after its devastating quake, one school at a time

Helping Nepal rebuild after its devastating quake, one school at a time