Harmful to humans and animals alike, the growing amount of plastic in the world’s oceans is an unfolding disaster. Fortunately, a number of ingenious minds are on clean-up duty.

On World Environment Day in June 2018, former Federal Environment and Energy Minister Josh Frydenberg said that more than 13 million tonnes of plastic makes its way into our marine environment every year. Globally, there will be more plastic than fish in the oceans by 2050, some experts believe.

Already, more than five trillion plastic pieces pollute our seas — collecting in huge systems of circulating currents far out to sea, washing up on beaches, and floating in bays. There are 500 times more bits of microplastic in the oceans than stars in the galaxy.

Plastic pollution poisons the water and kills marine animals that ingest it or become entangled. It quickens the spread of disease in coral reefs and contaminates the marine food chain from the smallest fish to the biggest fish restaurant. For humans, plastic poisoning can lead to cancers, birth defects, immune system suppression and developmental problems in children.

With more than eight million new pieces of marine litter ending up in the oceans every day, what can be done about this huge problem?

Engineers around the world are certainly trying — by designing technologies that take rubbish out of the ocean or stop it going in, or by trying to protect the ocean environment. Australian engineers are working in all of these areas.

A Seabin is like a barrel submerged under water, with its opening at water level facing upwards. It’s small and designed for use in coastal areas, where the bins move up and down with the tide to collect floating rubbish.

An electric pump sucks water in through the base of the bin, creating a vortex around the upper edge that pulls in water and floating debris. Inside is a filter bag made of coarse material, which collects the rubbish but allows water and tiny organisms — but not microplastics larger than 2 mm — to pass through.

“Our average so far is one tonne per Seabin and that’s with a manageable amount of maintenance.”

Each Seabin is fixed to a stable point, such as a jetty, where it is also plugged in to an electric supply. The company is investigating how to use solar and wind power to reduce its carbon footprint. It is also developing a microfibre filter.

“We want to get the debris close to the shore before it has time to age and create bastard systems in the marine biome,” Turton said.

These enormous accumulations of plastic, one in every ocean on the planet, do a lot of the damage to marine life. The garbage patches contain chemical sludge and broken-down microplastics, as well as large pieces of plastic. Some have become so huge that they can be seen from space.

However, many marine plants and animals also live around coastal areas in rock pools and pits: rock oysters, limpets, snails, starfish, anemones, kelp and other seaweeds. When a sea wall is built, these habitats get covered up and the animals suffer.

To help coastal marine animals to survive, researchers at the Reef Design Lab in Melbourne and the Sydney Institute of Marine Science, with Volvo and Fibercon, have designed what they call a Living Seawall for Sydney Harbour.

The plan is to 3D print complex geometries to create rock pools and crevices that will enable marine life to colonise the walls, rather than having a completely flat seawall. Fibres made from recycled plastic are embedded into the concrete hexagonal tiles to strengthen them — plastic tiles are stronger and more durable than concrete. Because of concerns about microplastics in the marine environment, the plastic will be contained within the tiles and not exposed to the water.

There are other Australian initiatives. Sydney-based Blockcycle aims to create a marketplace around waste materials that would normally go to landfill.

Ludovic Grosjean, an engineer with the OceanX Group in Melbourne, has designed an algorithm that he said will enable drones to detect, and therefore collect, plastic in the water.

“The algorithm analyses many thousands of images of plastic in the water and can distinguish between rubbish and a marine animal,” Grosjean said.

He envisages one day deploying airborne, underwater and water-level drones, powered by this artificial intelligence, at the source of the problem: the rivers around the world where most of the plastic enters the ocean.

Work is going on worldwide to address marine plastic waste.

US engineers have created an inner harbour water wheel to collect debris flowing down the Jones Falls River in Baltimore. The river’s current turns the wheel, which lifts debris from the water and deposits it into a barge. Solar panels provide additional power to keep the machine running when the water current is too slow. 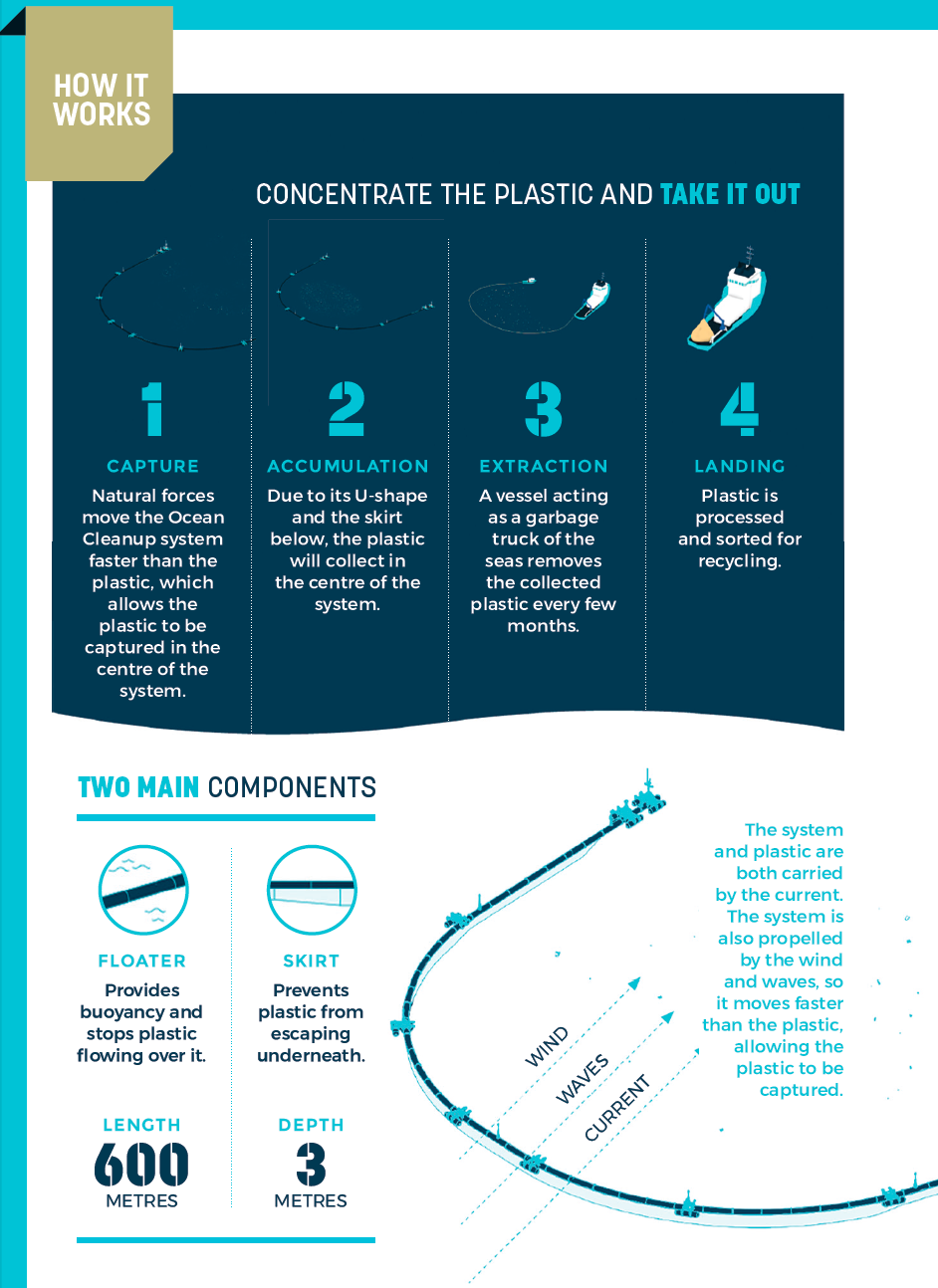 The technology is designed to push the accumulated plastic to the centre of its structure where it can be periodically collected and sorted before being collected for recycling.

Previously fixed to the seabed, the structure now floats along natural ocean currents.

However, problems have afflicted the launch, and the technology is not performing as expected. Ocean Cleanup plans to trial a new version in 2020.

Clever engineers, great ideas, fantastic technology. But it will take a lot more to deal with this problem.

Plastic pollution is a cultural and economic issue that requires political action. The problem is, to do what is really needed, politicians would have to go against some of the economic interests that support them.

This past July, the Australian Government joined the Commonwealth Clean Oceans Alliance and pledged to work with the eight other members — Fiji, Ghana, Kenya, New Zealand, Saint Lucia, Sri Lanka, the United Kingdom and Vanuatu – to address marine plastic pollution in the Commonwealth.

All members have promised to take action to eliminate avoidable plastic waste — which is not quite the same as saying they will actually eliminate it. Australia still has no new national threat abatement plan for the impacts of marine debris on vertebrate marine life, three years after the existing one was declared a failure by the Federal Department of the Environment and Energy’s Threatened Species Scientific Committee. The current government target is for 100 per cent of Australian packaging to be recyclable, compostable or reusable, but the deadline for that is not until 2025.

Some environmental groups want plastic to be classified as hazardous material. Others want to raise awareness about the damage microplastics cause to human health or the need for better disposal and recycling schemes.

Still more believe banning microbeads, plastic bags and non-recyclable bags is the answer. Many prefer to simply carry on blaming East and Southeast Asian countries, the worst plastic polluters. However, there are forces at work in all kinds of modern-day economies that make it difficult for the most ecologically minded politician to do anything to solve this problem.

Putting it on plastic

Industry and consumers still want cheap plastic. And where there’s demand, there’s profit to be made and protected.

The Australian plastic production industry alone produces more than 1.2 million tonnes each year, representing around 10 per cent of Australian manufacturing activity. Between 2012 and 2013, Australians consumed 1.5 million tonnes of plastic, the equivalent of 65 kg per person.

Plastic bags made their manufacturers $39.2 billion last year. Only 9 per cent of the world’s plastic is recycled. Plastic production is expected to quadruple by mid-century.

“In the UK, there’s no fiscal or monetary system that makes designers go for the really good-to-recycle designs,” said Keith Freegard, from the recycling group at the British Plastics Federation, the leading association for the whole of the plastics industry.

It’s the same elsewhere, and Freegard thinks manufacturers whose packaging is harder to recycle should pay more.

One way would be to give financial assistance to companies that use bioplastics or recyclables to make packaging to help them overcome the higher costs currently associated with making their products. And of those who want to carry on as they are, maybe the worst offenders could be required to put a percentage of their profits into developing technologies that help clean up the ocean.

After all, it is their mess.

This article originally appeared as “Flotsam fight” in the February 2019 edition of create magazine.