Archer Taymon Kenton-Smith will compete at the 2020 Paralympic Games with custom equipment built by engineers.

When archer Taymon Kenton-Smith takes aim in the 2020 Tokyo Paralympic Games, he’ll hold the bow with a custom grip created just for him.

The athlete, who was born with a partial left hand, will pull the bow into the grip with the help of a specially-designed arm brace.

And in the event that either the grip or the arm brace breaks during competition, he’ll be able to replace it with an identical 3D-printed product.

Mechanical and manufacturing engineer Callum McNamara is an engineering project officer at the Australian Institute of Sport (AIS). He designed and built equipment for Kenton-Smith and a host of other para-athletes competing in Tokyo.

McNamara said Archery Australia initially approached the AIS to improve Kenton-Smith’s grips. Already a talented archer, Kenton-Smith was using grips that consisted of a square 3D-printed base with a Bunnings-style epoxy moulded to the grip and his hand.

“This was an effective solution for Taymon because it was easy, and you could imprint the geometry of his hand and position,” McNamara said. “But the nature of the epoxy was quite brittle and it wasn’t robust. He was having to remake his grips every three or so months.”

“Every time he remakes that grip, it’s going to be a little bit different,” he said. “It’s not repeatable.”

The nature of the Paralympics means the engineering team almost always starts from scratch, McNamara said, designing products to suit the specific requirements of a particular athlete and their condition.

“That’s where 3D scan data is extremely useful,” he said. “Reverse engineering a lot of their equipment and interfacing that into the athletes is crucial for us to achieve an effective result.”

To develop a custom grip Kenton-Smith, the team took a 3D scan of his current grip, and worked with him on his ideal geometry and positioning. They then developed a grip that could be produced in a tough resin using SLA 3D printing.

“We then also developed an offset surface in the interface of the grip, which was printed in a flexible 50A shore hardness resin,” McNamara said. “It creates an elastic interface for better grip… and a bit of shock absorption as well.”

The digitised product means the team can easily reprint an identical grip when needed.

“The nature of the epoxy was quite brittle and it wasn’t robust. He was having to remake his grips every three or so months.”
Callum McNamara

Like many of his colleagues at the AIS, McNamara is a sports enthusiast.

“A lot of us have a background in motorsports,” he said. “So that push for performance and squeezing efficiencies and gains where we can — it’s exactly the same principles you’d apply within motorsports to the technology aspects of traditional sports.”

McNamara said some of the parts made by the engineering team are very simple, such as customised padding for racing wheelchairs. Designed to fit individual athletes, the inserts allow competitors to sit in their chairs as snugly and efficiently as possible.

Other products are more complex, and deal with increasing power transfer and efficiency. 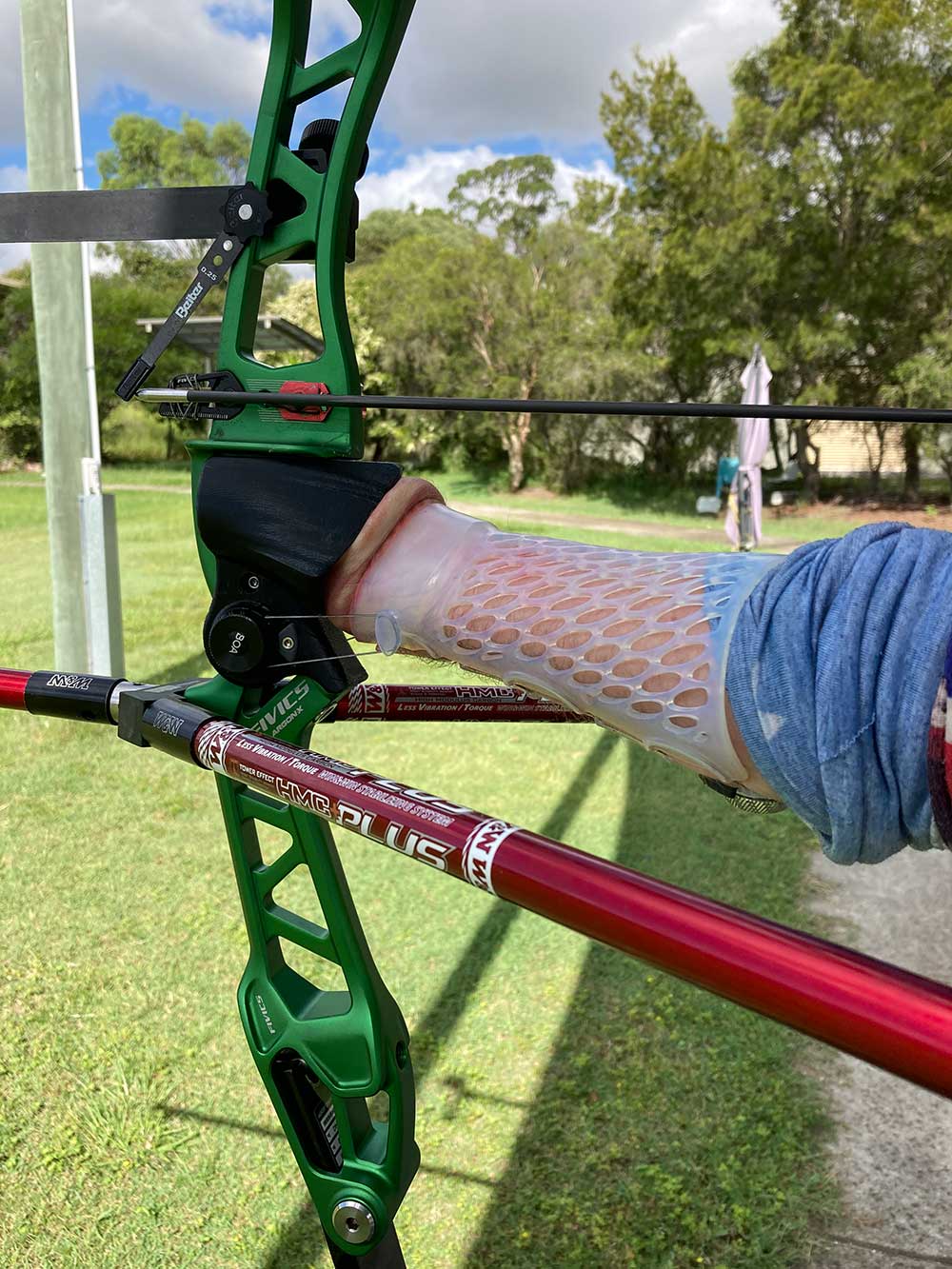 For example, the grip project ultimately expanded to look at how Kenton-Smith held the bow. The archer had been using a leather arm brace with metal hooks similar to those at the top of a hiking boot. Attached to that was a piece of paracord that Kenton-Smith used to pull the bow into his grip.

“Again, with these bits of equipment, Taymon had reliability issues,” McNamara said. “The cord would fray, the repeatability of manufacturing the length of that cord was very difficult, because it was set at a certain length and handmade.”

“We’ve been incorporating ceramic bearings into the racing wheelchairs… along with axles with increased stiffness,” McNamara said.

“We have geometry for every athlete and their respective gloves… so that they have the equivalent of [their] running shoes, all identical and ready to go if anything does happen,” McNamara said.

Athletes often approach the AIS looking for improved performance in one area, only to end up reviewing everything.

“Particularly with para projects, we’ll find that if we increase the performance of one product… there’s going to be a flow-on effect,” he McNamara said.

“So it’s not uncommon for us to then look at complementing componentry to further enhance the system as a whole.”

“Particularly with para projects, we’ll find that if we increase the performance of one product… there's going to be a flow-on effect.”
Callum McNamara

Instead, the engineering team integrated a couple of BOA ratchet dials, which are commonly seen in footwear. These were added to a custom arm brace with coinciding connecting points, allowing Kenton-Smith to adjust the tension.

“The BOA dials are readily available to purchase as spares and, again, we have the data for his arm brace, which we’ve also 3D printed,” McNamara said. “It’s a really nice solution for Taymon to get the full arm brace and grip.”

McNamara said 3D printing allows the team to incorporate features that couldn’t be achieved with traditional manufacturing methods. It also increases their throughput, with the printers able to work 24/7.

Kenton-Smith’s arm brace, for instance, has an internal cable with routing that is all contained inside the printed brace.

“This is a geometry that you couldn’t achieve through any other means of manufacture as simply as we can through 3D printing,” McNamara said.

“There’s some really great advantages to be had when you leverage that technology.”

Australia’s four-person Tokyo para-archery team is the biggest since the Sydney 2000 Paralympics. Taymon Kenton-Smith will compete in the men’s recurve open event.