Fibres from a humble hummock plant usually dealt with by fire could find their way into new, sustainable materials.

More than a fifth of Australia’s landscape is dominated by Triodia, or spinifex grasses.

The 69 native species thrive in semi-arid environments and sandy, nutrient-poor soils, and rely on fire to regenerate.

These hardy, spiky plants became the subject of a 2008 ARC Discovery project, which Dr Nasim Amiralian joined in late 2010 after coming to the University of Queensland’s Australian Institute for Bioengineering and Nanotechnology (AIBN) from Iran on a PhD scholarship. Amiralian works with Triodia pungens, sometimes called soft spinifex.

Originally working on the plant’s sticky resins — long used by Indigenous Australians as an adhesive for tools and in thatching roofs — Amiralian had a breakthrough in 2012.

If T. pungens evolved to thrive in harsh environments, she thought, perhaps its nanofibre building blocks would have also evolved into something noteworthy. The hunch proved correct.

“Nanofibres can be extracted from any plant,” Amiralian told create.

“But the main difference is in the nanofibres produced from the spinifex; they’re very thin and long and flexible, and this is exactly what you need as a materials engineer.”

The fibres are “only tens of atoms wide but thousands of atoms long”, the AIBN’s Professor Darren Martin has said. This unusually high aspect ratio is “exactly what we look for when we want to reinforce flexible materials”.

Spinifex’s high content of hemicellulose, a variety of complex carbohydrates in plant cell walls, means processing the grass for its nanofibres can be done without excessive chemicals or energy use.

One account of the process describes mild pulping followed by a single pass of homogenisation, allowing the fibrils to retain their crystallinity.

“You would firstly hedge the grass, and then it would be chopped up and pulped with sodium hydroxide — and at that stage it just looks like paper pulp,” Amiralian has explained elsewhere.

“You hit it with mechanical energy to force it through a very small hole under high pressure to peel the nanofibres apart from the pulp, into nanocellulose happily suspended in water and ready to add to things like water-based rubber latex.”

Amiralian found that the resin makes a pretty good anti-termite coating, but she has since been focused on processing and harnessing the unique properties of these fibres.

They have potential as a super-additive in applications, including building materials, packaging and elastomers, and are able to add strength and flexibility in tiny loadings.

An area of interest for this renewable material is in rubber reinforcement, with improvements gained from additions of as little as 0.1 per cent.

This has potential for thinner, better gloves and condoms, as well as for rubber compounds.

Tests conducted in 2015 found that its use in latex gave performance improvements of 20 per cent in pressure and 40 per cent in volume during a ‘burst test’.

A PhD student is also investigating the cellulose nanofibres’ usefulness in boosting the efficiency of creating carbon fibre, a notoriously heat and energy-hungry process. Other work has revealed usefulness in bitumen roads.

There are numerous exciting industrial applications, said Amiralian, who was a factory manager in Iran for two years before moving to Australia to begin her doctoral studies in nanomaterials engineering.

There are currently 15 people exploring different applications in different industries based on the platform technology she developed and patented.

A goal is to scale up output at the pilot facility, which came out of a long-running collaboration with Dugalunji Aboriginal Corporation, to 5 kg of dry weight of nanofibres per week. Longer term, a goal is to create processing jobs for Indigenous Australians in the small town of Camooweal.

Australia is far from the only country researching the industrial usefulness of cellulose nanofibres. Amiralian believes “we are running behind the rest of the world” in this fast-growing field.

“If you look at Europe, North America, Japan, and Canada, they’re developing a lot in this area,” she said.

“It’s from a natural source, it’s biodegradable, and with all these new concepts around packaging, the rest of the world is moving really fast toward using these nanofibres for different applications.” 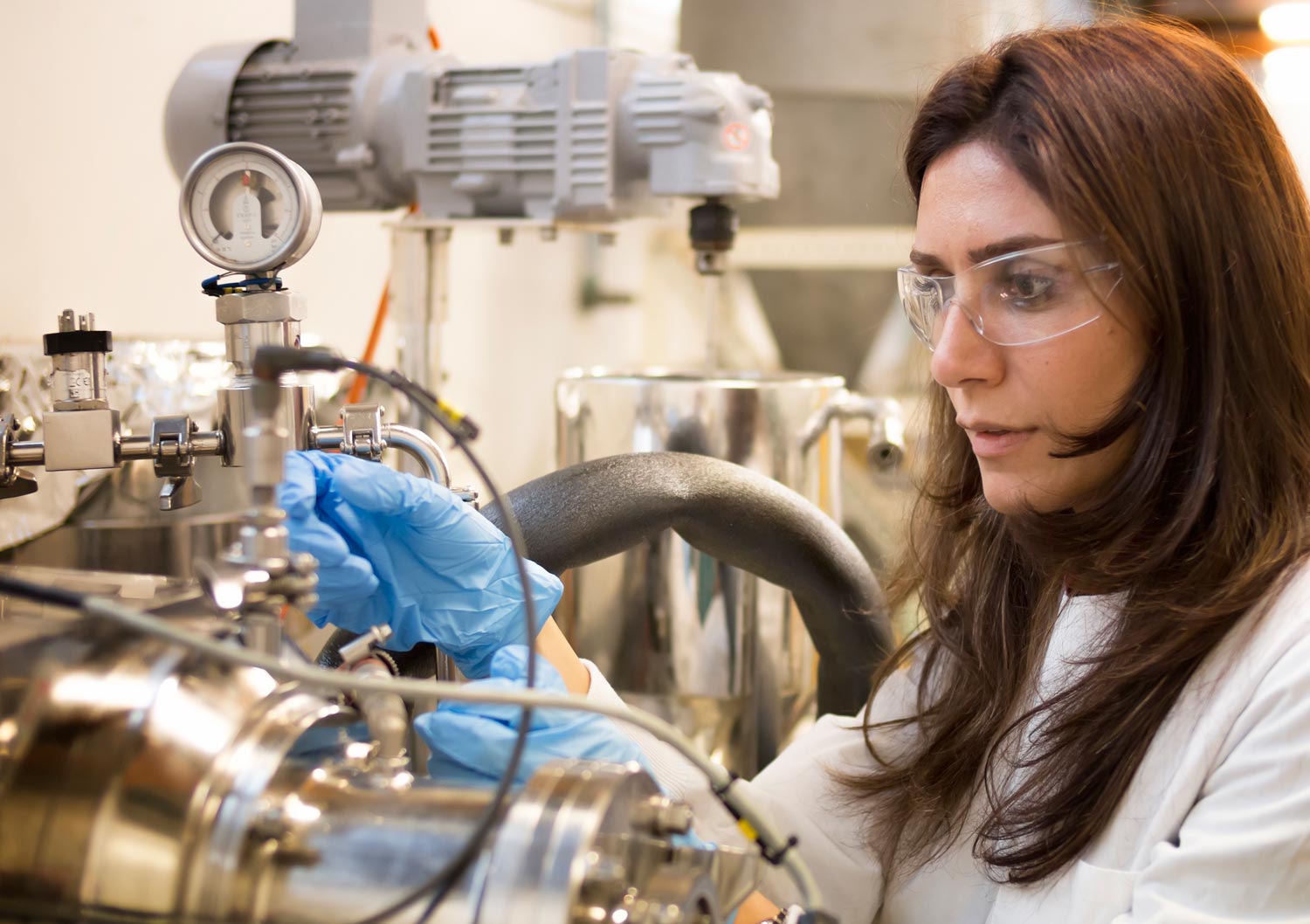 Amiralian declines to say which of the applications are the closest to commercial reality.

“It really depends on a lot of things: economics and then the collaboration between industries,” she said.

“It’s hard to tell at this stage.”

She is also unable to comment on the findings, but said a paper has recently been accepted on the growth rate of spinifex under farming conditions.

How renewable this promising new industry might be is a subject for after the embargo has passed.

Currently, little is being done with spinifex other than keeping it in check by burning. It is sometimes used as a fodder of last resort, but animals ignore it unless they are particularly hungry.

A suite of novel applications for this endemic plant is exciting news, for a variety of reasons.

“A lot of time people just burn it, but the grass grows again, and this leads to the emission of lots of CO2 gases,” Amiralian said.

“There’s no other application for this currently, except just as cattle feed. So, using this, you’re adding value to the grass. Instead of burning the grass, you are harvesting it and making fibre for new materials out of that.”

This article originally appeared as “Super grass” in the April 2019 issue of create magazine.