The printed solar cells on display.

An organic, printed solar material similar in thickness and appearance to a potato chip packet is being tested in a public setting for the first time.

Developed by Professor Paul Dastoor from the University of Newcastle’s School of Mathematical and Physical Sciences and Director of the Centre for Organic Electronics, the material is ultra lightweight, flexible, recyclable and cheap to produce, costing less than $10/sqm to manufacture using conventional printers.

The renewable energy technology is now on show in Lane Cove on Sydney’s Lower North Shore. For this application, it has been toughened with a polycarbonate casing and attached to an arbour, where it will generate power during the day. This will be stored in a battery and used to power an interactive light display at night.

Dastoor, who has been immortalised in a hologram as part of the experience, said showcasing the technology in this way would help researchers refine the design.

“These large-scale demonstrations are vital to the ongoing development of the technology, since they allow us to test the science and engineering involved in the technology at scale, which is crucially important as we approach full commercialisation,” he told create. 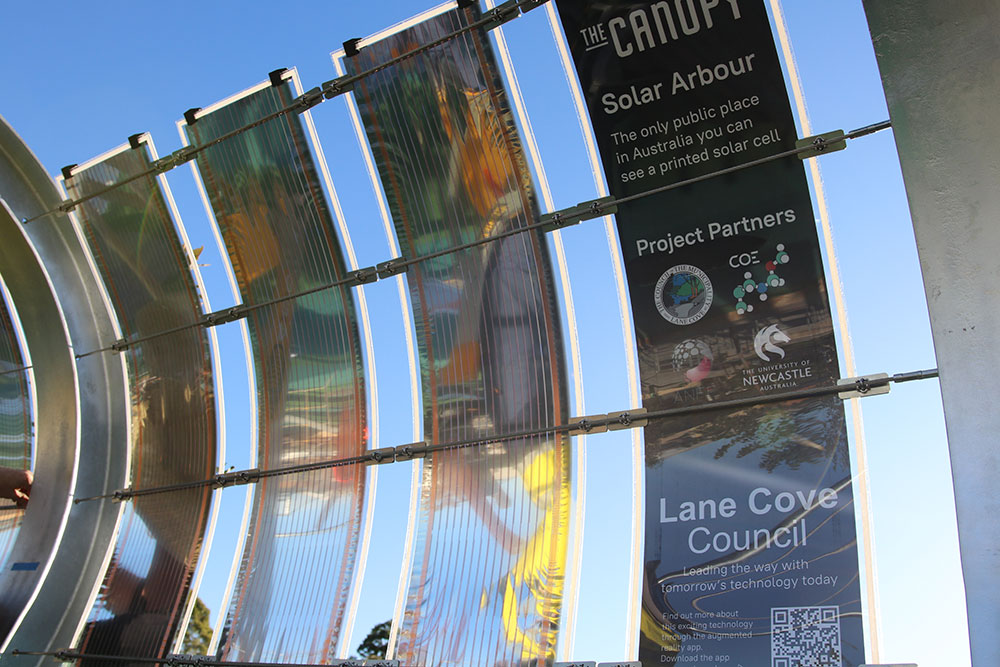 But the public display isn’t just a way to test the technology in a real-world setting. It is also a way of taking “science to the streets” and starting conversations, Dastoor said.

“The demonstration plucks extraordinary science from behind sealed lab doors, and places it in an ordinary environment, where people will interact with it as they go about their grocery shopping, play with their children in the park or enjoy food in one of the nearby restaurants,” he said.

“It’s an effortless and subtle way to spark conversation and showcase ‘what’s next’ in energy generation to thousands of people.”

With the Federal Government currently considering submissions to its technology investment roadmap, Dastoor said it was a fitting time to get people thinking about Australia’s energy future.

“The government is seeking to bring down carbon emissions over the next 30 years, and the community has been very engaged on this subject,” he said.

“Globally, there are many research groups like ours working on sustainable energy technologies, and now — via the technology investment roadmap — is our opportunity to ensure we invest in and deliver clever solutions.”

“Printed solar technology can be simply rolled out over vast areas and manufactured on demand.”
Professor Paul Dastoor

The applications for the technology are “wide and varied”, Dastoor said, including everything from industrial roofing to horticulture, emergency relief and defence.

“Printed solar technology also opens up new applications that are inaccessible to current PV [as] it can be simply rolled out over vast areas and manufactured on demand,” he said.

“Imagine a world where everyone has access to electricity, and where every surface can generate clean, low-cost, sustainable energy from the sun.”

The material has been manufactured at the University’s Newcastle Institute for Energy and Resources, which can produce hundreds of metres per day. However, Dastoor said creating an advanced manufacturing facility for printed solar in New South Wales was the ultimate goal for his team.

“We’re now reaching the point where we need to significantly scale this level of production,” he said.

“As a diverse team of physicists, chemists, engineers and educators, we’re considering not just the scaling of material production, but the education and training framework that will wrap around the industry to train and retrain an entirely new workforce.”

Dastoor said it was this interdisciplinary team that helped get the installation off the ground.

“The Centre for Organic Electronics is remarkably diverse [and] includes engineers from almost every discipline: mechanical, electrical, electronic and chemical,” he said.

“It is only with the help of this engineering knowledge that we are able to pull off such large demonstrations of the technology.”