Renee Wootton is flying high in the aerospace industry

Aerospace engineer and pilot Renee Wootton has achieved a lot in her time in the industry, but she’s also determined to help others succeed.

From stints at Qantas and CAE Australia to gaining her commercial pilot licence, Renee Wootton has made big strides in her decade in aerospace and aviation.

The proud Tharawal woman is a 2020-21 Superstar of STEM, and recently joined Western Sydney Airport as Strategy and Planning Manager.

But it all started with an ad in the local newspaper.

As a teenager, Wootton had moved to a small town in regional New South Wales and, looking for a way to meet people, joined the Australian Air Force Cadets.

“My auntie actually found [the ad] in a newspaper and suggested that I go along for an intro session,” she told create.

“I did and I really liked it — I think I was drawn to wearing the uniform, learning about the military and polishing my boots for the marching.”

For the next two years, she took up opportunities to travel around the country with the cadets, becoming ever more curious about aviation.

“I participated in marching competitions that took me to RAAF bases around NSW, where we got to meet fighter pilots and engineers — all of these people with incredible careers,” she said.

“It really opened my eyes to new experiences, new adventures and new people.”

While still in high school, she enrolled in a Certificate II in Aeroskills (Mechanical), travelling to Sydney in the school holidays to complete the program.

“During that time, I got to learn all about aircraft; how to pull them apart, put them back together, how to use maintenance manuals and power tools,” she said.

“You’d walk out on to a tarmac at an airport or get to sit up in the [air traffic control] tower and watch aircraft come in and out. And it was just this really cool, exciting, loud experience. That’s when I realised that this was really interesting to me.”

“We got to meet fighter pilots and engineers — all of these people with incredible careers. It really opened my eyes to new experiences, new adventures and new people.”
Renee Wootton

While completing a degree in aerospace engineering at the University of New South Wales, Wootton began interning at Qantas Engineering across Maintenance Operations, Fleet Performance and Development and Powerplants (Engines).

She worked on one of her most gratifying projects yet: an algorithm that predicts fuel tank temperatures of the Airbus A380 plane.

“On a 14-hour flight, say from Sydney to Johannesburg, the fuel temperature drops extensively,” she explained.

As the fuel level and volume drops over the course of the flight, heat transfer speeds up. Fuel freezes at approximately –67°C, so predicting and reacting to temperature changes is crucial.

“There are two alternatives [for pilots]: you can either fly faster, which creates aerodynamic heating on the surface of the wing and, in turn, heats the fuel inside the wing. Or you can reduce your altitude to warmer temperatures,” Wootton said.

“The algorithm that I was building was predicting and forecasting what that fuel temperature would be — to essentially enable the pilot to make that decision to either fly faster or lower.” 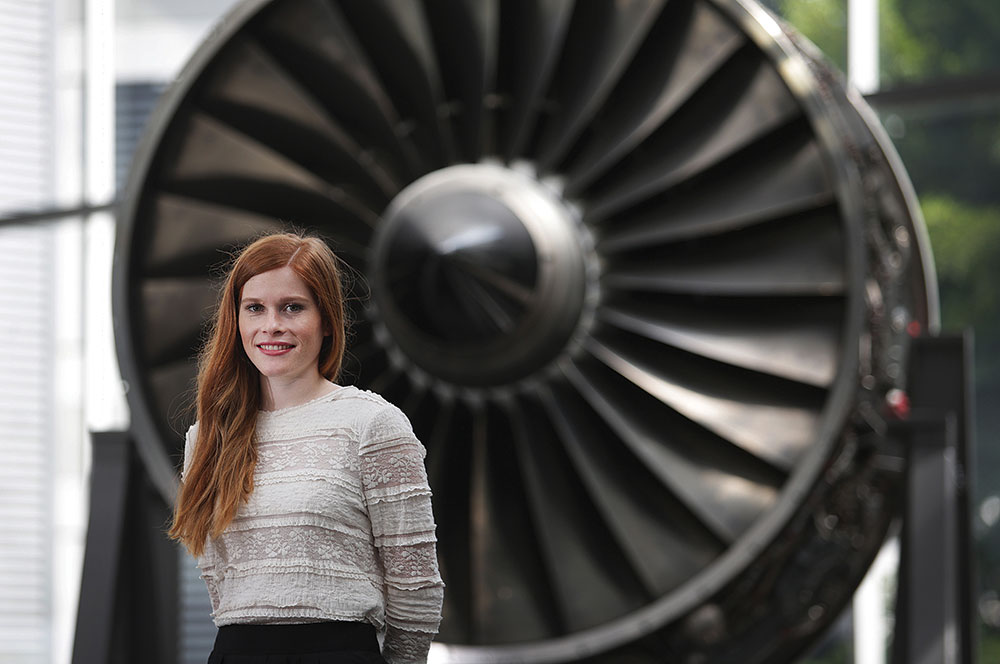 With a lack of available data, she had to work backwards to establish key details like fuel tank surface, which was no easy feat.

“It was incredibly challenging and very rewarding,” she said of the 18-month project.

“I learnt so much more about the aircraft; I built skills in coding and used some really key mathematical concepts and theories to build that algorithm.”

After finishing her degree, she spent two years in the Qantas Graduate Program before becoming a senior analyst for the airline’s loyalty program.

Taking a six-month break to work at tech start-up Kintell, she then returned to Qantas in 2019 and joined the QantasLink Flight Operations team where she worked on performance engineering problems and supporting the Dash 8 fleet operation.

In April 2020, Wootton moved to aerospace company CAE. As a project engineer, she worked on flight simulator upgrades for the C-130J Super Hercules and KC-30A Multi-Role Tanker, aircraft used by the RAAF.

She also found time to study for her pilot licence, which she accomplished in October 2020.

In July, she stepped into her new role with Western Sydney Airport, supporting the development, monitoring and refinement of its business and corporate strategy.

“The algorithm that I was building was predicting and forecasting what that fuel temperature would be — to enable the pilot to make that decision to either fly faster or lower."
Renee Wootton

Space is the limit

As her career takes off, Wootton’s fascination with aviation continues to deepen.

“When you learn the basics of flight, and experience it for yourself, you start learning more, and your curiosity leads to so many other options. That’s always been my experience in aviation,” she said.

“Hundreds of years of development and testing and fatalities and accidents have led us to where we are today. But there’s just so much further we can reach and many more boundaries that we can push.”

There’s one big boundary she’s interested in pushing: becoming an astronaut. But that’s a long-term goal and, for now, she’s staying grounded.

“If the astronaut thing doesn’t work out, I think the opportunity to work in the space sector and continue to work on such exciting technology and be a part of the plan to make it to Mars one day — that would be pretty amazing.”

During a varied career, Venkatesan Narayanaswamy’s desire to learn has remained the same

Kim Thomson is a freelance writer based in Victoria. Her work has appeared in The Saturday Paper, The Age and The Australian, as well as a range of industry publications and independent titles.