How software helped bring this innovative bridge design to life

Engineers harnessed advanced software to deliver what is believed to be an Australian first: a single-span, integral steel trough girder bridge on a busy freeway.

Melbourne’s CityLink Tulla Widening project is a $1.3 billion upgrade to one of the city’s most heavily used stretches of freeway. From Power Street in Southbank through to the Melbourne Airport in the North-West, 24 km of the CityLink, Calder, and Tullamarine freeways are being upgraded. The project is set for completion this year and will boost capacity by 30 per cent with additional lanes, upgraded intersections, new bridges, and a new freeway management system.

As part of the project, the design joint venture is handling design from Bulla Road near Essendon Airport north to Melbourne Airport, a section which includes the redesign, demolition and construction of English Street bridge. The bridge had to be lengthened and converted from a double span to a single span to accommodate additional lanes in either direction, and at the same time widened to accommodate additional lanes on the bridge to increase capacity to Essendon Fields. 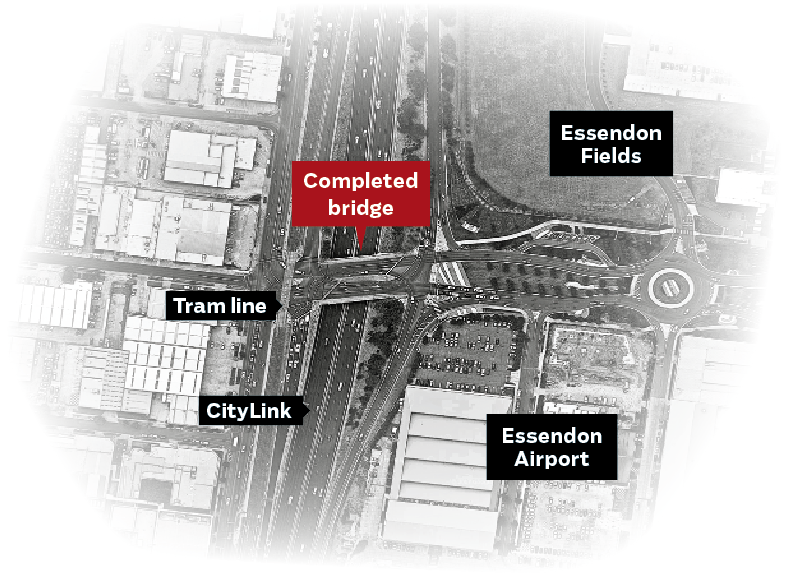 As part of the requirements VicRoads stipulated an integral structure. “Their big push at the moment is to reduce maintenance, so a lot of projects now have a clause calling for integral structures where possible,” said Liam Thompson, Arcadis Senior Bridge Engineer.

“By eliminating bearings and expansion joints completely, you remove the two most maintenance intensive elements, reducing the whole of life maintenance cost of a structure,” he said.

The design joint venture went for an integral steel trough design – the first of its kind in Australia – built to AS5100-2004, so able to handle 160 t vehicles in each lane across the width of the bridge.

But the site is significantly constrained by a tram line running along the western edge of the site along Matthews Street. “That was our main limiting criteria, trying to get as little interaction with that tram line as possible,” said Thompson. Along with the clearance requirements over the freeway, this meant a shallow superstructure: one meter from the deck slab surface to soffit of the steel girders.

The English Street bridge is also a main access point for Essendon Fields, which includes a retail and business district as well as an airport. Combined with the fact that the bridge spans the major Tullamarine freeway, traditional lengthy closures for construction were not an option.

The original tender stipulated six weeks construction time, including bridge closure, demolition of the existing structure, boring piles, constructing the bridge, and reopening for traffic. The contractor LendLease Engineering, with their design partners Arcadis and WSP decided they could meet the six-week schedule, but when design was 85 per cent completed, things changed dramatically.

“VicRoads requested a shorter construction timeframe, by half the original construction time stipulated in the tender. So, working closely with Paul Raworth and Salvatore Valvo, Senior Project Engineers from LendLease Engineering, we had to come up with another solution, which is what we call accelerated construction methodology,” said Ryan Ryanto, Arcadis Technical Discipline Lead.

The steel girders were fabricated by Haywards in Tasmania. To meet the schedule, elements such as the deck, with barriers in place, were prefabricated at another location and transported to the site and assembled over two nights.

“We had an 11.5-hour window from shutting the freeway to reopening that we had to bring the 11 steel girders, the two 160 t units, and do all the beam lifts,” Thompson said.

While Arcadis WSP JV specified 40 MPa concrete for most elements, LendLease Engineering decided to go with 55 MPa in the end to ensure early strength was achieved and there were minimal hold ups on site waiting for concrete to cure.

“Getting it right virtually was critical if we were going to get it right in real life,” said Thompson.

For this, the design joint venture used Bentley’s MicroStation to build a complete virtual model of the bridge and then run clash detection to pinpoint any issues. “It allowed us to produce rendered screen shots of critical areas and also model reinforcement bars in various colours,” said Ryanto.

While 3D modelling is now standard, this level of detail – even modelling reinforcement bars – isn’t normal.

“For simpler structures, we don’t do detailed 3D modelling of reinforcements as for English Street,” he said.

“For a Y-shaped pier on the previous M80 project, we modelled everything in 3D, including full pier reinforcement details, steel girders, drainage, and pits,” he said.

MicroStation’s clash detection is flexible, and can be performed based on levels, layers, elements or groups of elements.

“We don’t do clash detection on every piece of reinforcement in the structure, only at critical locations: precast to cast in-situ elements, stitch connections between decks and barriers,” Ryanto said.

At English Street, the critical location is the integral abutments to the piles and deck diaphragm, as well as the steel girder connection to the abutment diaphragm. Detailed modelling and clash detection was also performed on the trough girder connection.

In order to meet the tight schedule, the Arcadis and WSP team also modelled and performed clash detection for connections between precast crossheads and the bored piles, with 15 mm of tolerance. In the end, the fine tolerance proved to be a problem for the piling contractor, as they normally work to tolerances of around 75 mm, so the design was changed to a cast in situ crosshead.

“It would have been great to see, because we did a fair bit of work on it, but unfortunately they weren’t able to do it due to the limited tolerance,” said Thompson.

As part of the project, VicRoads also required the design joint venture to use TeamBinder to share designs and modelling with fabricators and other contractors. Sharing modelling and designs across software allowed the piling contractor to identify the issue with tolerances.

“We gave them the design IFC [Issued for Construction] and that’s when they had a look and said ‘we can’t do in-situ piles with these tolerances,’ which let us plan for cast in situ instead,” said Thompson.

Ultimately the bridge went up in half the time without a hitch. Anyone who arrives into Melbourne has to drive under its wide, steel-girder span on the way to the city.

“There’s no other way,” Ryanto said.

Autonomous vehicles are going to be a data gold mine

Additive manufacturing is the future, and it's time we take it seriously

Additive manufacturing is the future, and it's time we take it seriously