LAVO is a hydrogen battery system that works by drawing electricity from a rooftop solar array, using an electrolyser to split water into hydrogen and oxygen, storing the hydrogen in a solid state in silver hydride tanks, before dispatching this as electricity via a fuel cell when needed to generate electricity.

A collaboration between universities and industry, LAVO’s Chief Marketing Officer Matthew Muller told create about the innovation researchers hope will make the world cleaner and greener.

“The LAVO storage unit, incorporating LAVO’s Hydrogen Energy Operating System (HEOS) technology developed at the University of New South Wales (UNSW), is used to generate energy  — either electricity or hydrogen — that can be used to power vehicles and heating solutions,” he said.

The system can store hydrogen equivalent to up to 40 kWh of electricity, which is enough to power an average household for more than two days without additional solar input. When additional energy is required, it uses a fuel cell to deliver it into the home via a small 5-kWh lithium buffer battery.

“LAVO acts as a solar sponge, integrating with rooftop solar to capture and store renewable energy for use when needed. It is focused on green hydrogen, created from electrolysis of water to release hydrogen and oxygen,” Muller said.

“This unique hydride is energy efficient, carbon neutral, safe, non-flammable and designed for all components to be recycled.”

“LAVO acts as a solar sponge, integrating with rooftop solar to capture and store renewable energy for use when needed.”
Matthew Muller

LAVO says its batteries last three times longer than similarly-priced lithium batteries, such as those used in Tesla’s Powerwall 2 — only it also comes at around three times the price. Engineers believe each device will last for around 30 years. 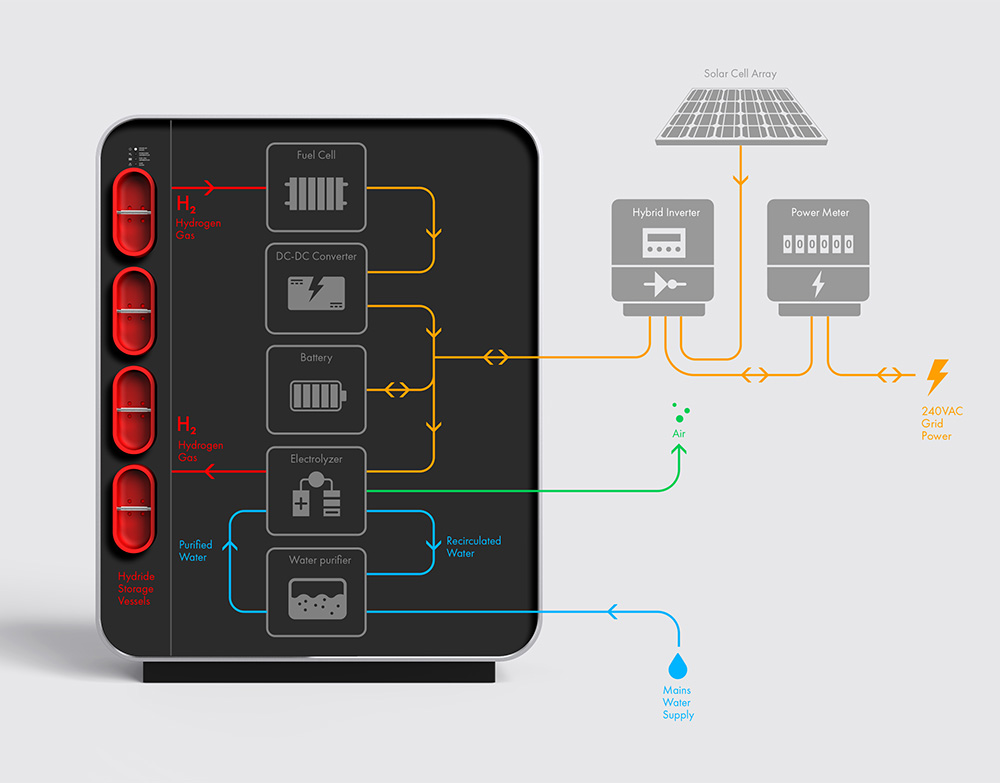 “It stores hydrogen in a patented metal hydride, as opposed to alternatives in ammonia or as pressurised or refrigerated gas. Hydrides are a safer, better and more innovative solution,” Muller said.

However, LAVO says that the system’s “round-trip efficiency is above 50 per cent,” meaning each device will lose about as much energy as it provides.

The batteries retail between $29,450 to $34,750. Described by one website as “a combination of gaming console and vending machine” which aesthetically contrast with Tesla’s Powerwall home batteries with a “more gadget-y look.”

Weighing 324 kilograms when installed and measuring 1680 x 1240 x 400 mm, the battery features four hydrogen vessels, which are 32 kilograms each. The maximum system pressure is 35 bar, and it can operate in temperatures from -10°C to +50°C.

There’s also Wi-Fi connectivity and a phone app for monitoring and control, while businesses can run several LAVOs in parallel.

Coming to a shelf near you

Currently available for pre-order, LAVO says its first installation occurred last month in South Australia and it will be installation-ready for Australian customers by June 2022.

“Currently, LAVO has 2214 pre-orders from over 40 countries, with an average of 100 new orders coming in each month. There is strong interest and demand for the system, with some consumers choosing to pay over $250 to join the waitlist,” Muller said.

And the business aims to continue developing further applications for the system.

“The research team at UNSW has developed prototypes of both a barbecue and bike using LAVO’s patented metal hydride technology and we are continuing to invest in further R&D to advance these prototypes into consumer-ready products,” he said.

The engineers are also working in partnership with a number of organisations to roll out pilot projects to test the applicability of the system in a range of settings.

Partnerships include a strategic partnership between LAVO, Ampcontrol and Boundary Power to identify the use of LAVO’s hydrogen storage solutions and other zero-carbon products in different demonstration sites, a joint venture with LAVO and Nedstack to localise the manufacturing of hydrogen fuel cells in Queensland, and working with Hybrid Systems Australia to support Western Australian renewable hydrogen strategy.

Why Leidos Australia is supporting its employees to become Chartered engineers

Why Leidos Australia is supporting its employees to become Chartered engineers