A car accident during medical school left Dinesh Palipana paralysed from the chest down. Now he’s working with a team of engineers to help people like him one day walk again.

It began in an elevator.

That’s where Claudio Pizzolato ran into his neighbour, Dinesh Palipana, a fellow student who was living a couple of doors down. The two found they had a lot in common: Pizzolato was an engineer and Palipana was in medical school, but each was studying at Griffith University, and both had an interest in spinal cord research.

But for Palipana, the interest was also personal. When he met Pizzolato in 2016, he had been paralysed from the chest down for five years. A car accident in 2010 had put him in hospital for nearly a year, disrupted his studies and left him with quadriplegia.

“I came back to medical school, but through this whole period, I was looking at what the new developments were with spinal cord injury research and paralysis, and looking at what was happening around the world to treat and restore function in people that had been paralysed from it,” he told create.

At the same time, Pizzolato was researching musculoskeletal models — computational models that help explore the interaction between muscles and the nervous system during movement and rehabilitation.

“We started talking about spinal cord injury research, and his work and my work,” Palipana recalled. “And we started fiddling around with the idea of putting some of these studies  together, building on it, and building a research project and building therapies here in Queensland.”

“IT WAS ACTUALLY GIVING PEOPLE RETURN OF FUNCTION AFTER BEING PARALYSED FOR MANY YEARS, AND IT’S REALLY THE FIRST TIME WE’VE SEEN THAT IN HUMAN HISTORY.”
Dinesh Palipana

The two graduated on the same day in 2016. Today, they’re running the BioSpine Research Group, based at Griffith’s Centre of Biomedical and Rehabilitation Engineering.

The goal: for Palipana — and for other people with spinal cord injuries — is to walk again.

BioSpine is billed as a “novel neural restoration technology”. It combines technological solutions designed to help people with spinal cord injury to regain control of their limbs, such as a brain–computer interface and machine learning, with a therapeutic approach designed to one day restore damaged nerve connections.

The technology involves a motorised ergometer — an exercise bike, essentially — on which the patient sits. A brain–computer interface in the form of a head-fitting picks up the patient’s thought patterns using electroencephalography, and a machine-learning algorithm classifies the intention of those thoughts.

“You put the headset on and then you think about cycling or walking or just relaxing and the AI basically distinguishes what the person is trying to think and that generates an appropriate signal,” Pizzolato said.

“THAT IS BASICALLY THREE COMPONENTS: THE BRAIN, THE COMPUTER MODEL TO TRANSFORM THE THOUGHT INTO CONTROLLED SIGNALS FOR THE DEVICES AND THEN THE DEVICES THEMSELVES.”
Claudio Pizzolato

That signal is then transmitted to the ergometer to enable the desired movement — in this case, cycling — to be performed. The system also stimulates the muscles themselves, as would happen organically in the case of someone with an undamaged spinal cord.

“That is basically three components: the brain, the computer model to transform the thought into controlled signals for the devices, and then the devices themselves,” Pizzolato said.

But to make this work requires the technology to mimic a lot of bodily functions we do not usually notice. A cyclist does not think about every contraction of their muscles required to move; they think of the cycling action and allow the specific signals required to make it happen to fire from the spinal cord, and then adjust their movement according to the sensations they feel in their legs.

“Part of the technology involves stimulating the muscles so that there’s a thought-provoking process, of course, as well as actual [functional electrical stimulation] of the muscles,” said Dr Laura Diamond, a biomedical engineer on the team. “We want to understand that feedback loop: how much stimulation is required, how much is safe.”

This is a complex system, and to make it all work, a digital twin is integrated into the technology.

“It’s a computational model of the nervous system, the muscular system and the skeletal system of the person,” explained Pizzolato. “That allows us to translate these signals into something appropriate for the rehabilitation devices that is consistent with how the person would actually move.”

“It’s actually a clinical problem as much as it is an engineering problem,” Diamond said. “People with spinal cord injury, because they don’t have that sensory feedback loop, that can often result in injuries, over-training.”

That’s because they cannot rely on feedback from their nervous system to tell them if something has gone wrong.

“Without that feedback, we need to rely heavily on the computation, and the digital twin is what we’re actually able to do that with,” Diamond said.

The ultimate goal of this is rehabilitation: the hope is that the patient will be able to regain at least some control over the paralysed portion of their body.

“By combining the downward signals from the brain down and upward from muscles and tendons back up, there is evidence that it promotes neuroplasticity,” Pizzolato said.

“That enables reconnection of neurons within the spinal cord, as well as neuroplasticity, meaning that these signals can be redirected through still intact pathways back to the brain.”

That’s based on pre-existing research showing that such connections are possible to form, and the digital twin is designed to adapt once the patient has regained some control.

“At the moment, Dinesh doesn’t have any voluntary control of muscles in his lower limb; he’s relying fully on stimulation,” Diamond said. “But the assumption is that when that changes, we would then want the stimulation to adapt depending on how much he was actually contributing to the cycling.”

BioSpine is now undergoing its first round of clinical trials and, as well as leading the team, Palipana is currently its sole test subject. Using his experiences and expertise, they plan to report their results and make refinements to their processes, and then proceed to phase two, which will be a year-long trial with six subjects.

Having Palipana as a test subject gives the team unique insight.

“Dinesh gives us an opinion and brings in lots of expertise from a medical perspective and also from the perspective of an individual with spinal cord injury so we also understand what are some of the additional constraints we need to undertake,” Pizzolato said.

That enables his feedback to be more precise, said Dr Ana de Sousa, an expert in using robotics for rehabilitation.

“It’s funny to see our conversations, like we’re trying to find out when he’s the patient, when he’s the boss of the thing,” she told create.

“He doesn’t know the engineering aspect of it, but he knows the overall purpose, and overall goal … his feedback is a little more on point. He knows more where he wants to get.”

“EVERY INJURY IS VERY UNIQUE AND HOW THAT PRESENTS ACROSS PEOPLE IS VERY UNIQUE. WE WILL HAVE THE CHALLENGE OF NEEDING TO PERSONALISE THESE TREATMENTS.”
Dr Laura Diamond

Palipana’s unique place in the research means the team can ensure the patient’s experience is centred in what they do — which matters, because rehabilitation is most successful when the patient is engaged, comfortable and has their needs addressed.

“With spinal cord injury, obviously every injury is very unique and how that presents across people is very unique,” explained Diamond. “We will have the challenge of needing to personalise these treatments.”

The team engaged industrial design students to customise the equipment so it would be more comfortable. Pizzolato described the brain–computer interface, for instance as a “rigid hat”.

“We went through a couple of very expensive research-grade systems which were uncomfortable to wear after a while — after 10, 15 minutes,” he said.

“And if it’s not comfortable to wear, you can’t use it to do rehabilitation. So, through our students, we redesigned some of these headsets, and what we have done is basically redesigned them based on the head shape of the participants.

“So we used structural scanning to do a 3D-reconstruction of each person’s head and virtually we’ve selected the optimal location for the electrodes where they need to be placed.”

The technology is also constructed so that it can be easily changed or repaired.

“One of our ideas is having a system that’s modular, in a way that you can add new features, you can remove features, and you can just replace features quite easily,” De Sousa said.

“So I use what’s called a robot operation system, ROS. With the system, I can create this environment where we add everything, and we can remove parts of the system, and it still works.”

“WE DON’T WANT IT TO REMAIN A NICE EXERCISE THAT WE DO AT THE UNIVERSITY AND NEVER GOES OUT TO THE PUBLIC.”
Claudio Pizzolato

The BioSpine project uses existing technologies but combines them in unprecedented ways in hopes of making a breakthrough that is not yet possible. That, Pizzolato said, is what distinguishes it from similar work being conducted overseas.

“Our foundation is solid,” he said. “What we’re doing is putting everything together, plus adding a computational model of the person to really coordinate the rehabilitation devices.” The BioSpine team comprises engineers, doctors, physiologists, pharmacologists and more in pursuit of a genuinely multidisciplinary goal.

“The thing with medicine is that it’s so slow to adapt to change,” Palipana said. “Engineers are so solution-focused and they’re practical as well, which I have found to be really good because we are able to identify all these different problems and the guys in our team drive solutions.”

And though the team is yet to report results, everyone create spoke to was optimistic about the technology’s future prospects. If the round two trials go well, Pizzolato expects the therapy to be used outside a university setting by the end of 2023.

“We don’t want it to remain a nice exercise that we do at the university and never goes out to the public,” he said. “Eventually, if the technology goes in clinics, you need to get the clinicians on board.”

“We can’t service large numbers of people in the community within the university long-term. It’s not sustainable,” she said. “The idea is that you want accessibility; you want effective therapy to be accessible to all.”

When asked about his next steps, Palipana’s response is direct — and literal.

“That would be the dream actually. It’s an audacious dream, but that’s what we’re working towards. To give people that opportunity.” 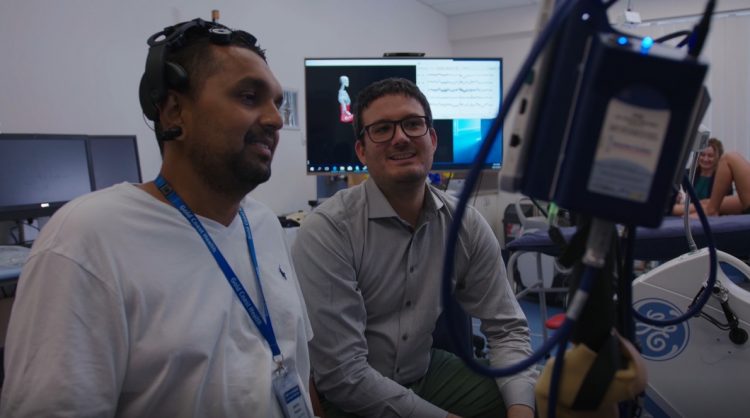