Data shows the engineering profession can weather a slight downturn.

Job vacancies for engineering roles took a downward turn in 2019, but an Engineers Australia report shows a silver lining.

In New South Wales, the state in which 28 per cent of Australian engineering job ads were placed in 2019, year-on-year growth in such ads contracted by more than 21 per cent.

While greater than the 13 per cent drop in total vacancies for all types of jobs, the fall in engineering roles followed a general and expected pattern that was driven by a broader economic downturn across the Australian economy.

The nationwide contraction in engineering job vacancies during 2019 was 9.2 per cent, compared to a 7.4 per cent contraction for all internet-based job ads.

The better news, as outlined in Engineers Australia’s latest Australian Engineering Vacancies Report, is that the last few months of 2019 generally showed a slowdown in the contraction in engineering job ads, with a clear uptick during the final two months of the calendar year.

This potential turnaround aligns with an economic revival projected by the Reserve Bank of Australia (RBA). The RBA projects a gradual recovery after a low point was reached during 2019.

That recovery, the RBA said in its November 2019 Statement on Monetary Policy, will be driven by low interest rates, tax cuts, an upswing in the housing process and, most importantly for engineers, progress in the resources sector and a boost in infrastructure spending.

“With substantial funding allocated for State, Territory and Commonwealth infrastructure projects, I am hopeful that the infrastructure pipeline will strengthen, resulting in greater prospects for engineers.”

Interestingly, despite the nation-wide contraction in engineering job ads, there were outliers that bucked the trend.

How did those major states fare?

As mentioned, vacancy growth in NSW contracted by just over 21 per cent. An average of 1161 engineering jobs were advertised in NSW every month throughout 2019.

Victoria, which boasts 23 per cent of Australia’s engineering vacancies, contracted by 14.7 per cent, as compared to all job vacancies in the state contracting by 6.7 per cent. The average monthly number of job ads for engineers in Victoria was 930.

In Queensland, which holds 20 per cent of Australia’s engineering vacancies, the growth rate narrowed by just 2.5 per cent. The average monthly number of job ads for engineers was 839.

How should engineers read this data?

Dr Bronwyn Evans, CEO of Engineers Australia, said it’s simply one tool in a toolbox that can be used to keep a finger on the industry pulse.

“Advertised vacancies in Australia were trending down throughout 2019 overall, but the end of 2019 saw a slight recovery. The downward trend reflects the slowing down of the Australian and global economy during 2018-19.

“Thankfully, the trends show a recovery for engineering vacancies towards the end of 2019, and this is expected to continue in line with predictions for broader economic recovery.”

Just as interesting as the macro trends, Grady said, are the indications of demand for specific types of engineers. 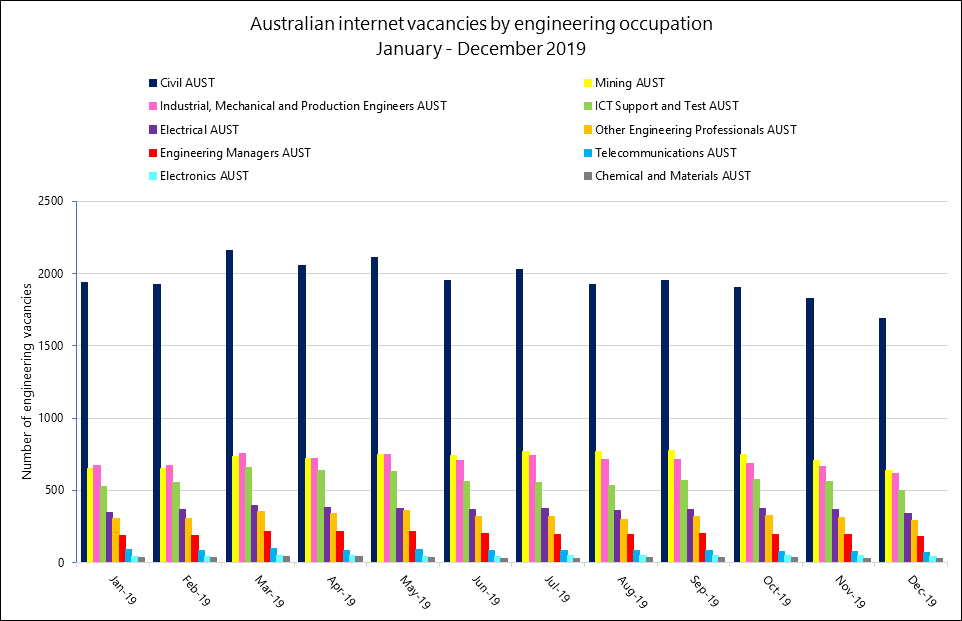 “The severity of the decline in the engineering job market varies according to specific engineering occupations,” Grady said.

“The data shows that the demand for civil engineers is consistent in all states and territories, except WA and the ACT.”

“Unfortunately, the report shows that there is less opportunity for chemical, materials and telecommunications engineering jobs. But we know that engineering skills can be applied in many career contexts, so the trends are not necessarily indicative of employability of engineers with these skills.”

Jobs of the future will be both people and tech-centric, report finds

Here are two real-world applications for modelling and simulation technology

Here are two real-world applications for modelling and simulation technology