Award-winning renewables engineer says her technology can change the world

It follows her recognition as one of create’s Most Innovative Engineers last year.

Hao, who is on a mission to make solar cells cheaper, greener and more efficient, said her field of solar photovoltaics was “critically important, contributing towards saving our environment and our planet” — but her work is just the beginning.

“The award is a great honour and shared with group members, mentors, collaborators and all those at UNSW who have supported this vital work,” she told create.

When create last spoke with Hao in 2018, her team had broken the world record for energy conversion efficiency for sulfide kesterite (CZTS) solar cells that they had set two years earlier, by reaching 11 per cent efficiency.

Today, Hao is continuing to search for ways to maximise energy conversion efficiency in silicon cells — which dominate 95 per cent of the photovoltaics market — by using abundant, non-toxic materials that will make the technology commercially viable and sustainable.

“The ultimate target is to maximise the use of solar power, making it cheaper and more efficient,” she said.

“The ultimate target is to maximise the use of solar power, making it cheaper and more efficient.”
Associate Professor Xiaojing Hao

“Then, it can be used in more visible areas in addition to solar farms and solar roofs, such as integrated onto the bodywork of vehicles, used as coatings on buildings and powering the Internet of Things — and we can all benefit from renewable energy everywhere.”

“Silicon is almost the ideal material for photovoltaics, but there is a need for similar non-toxic and abundant thin-film materials that can be as efficient as silicon, and which can be used in applications that are not well-suited to silicon solar cells or can be combined with silicon for boosted power output,” she said.

“The latter is particularly important for photovoltaic applications with constrained areas, because more electricity can be generated in a limited area.” 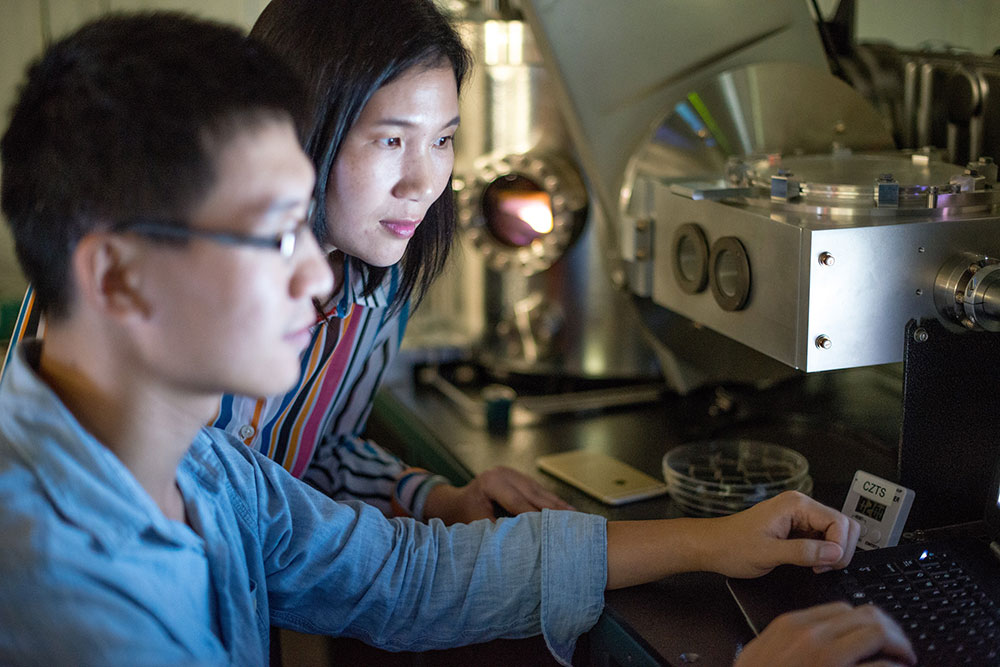 Coming to a street near you

Hao is also looking at ways to increase durability and ensure the solar cells can be recycled.

“A key part of what we are working on is developing the top cell, which can be stacked on silicon,” she said.

“The top cell can more efficiently convert higher energy parts of the solar spectrum, generating more electricity. This top cell needs to be in a comparable lifecycle and would need to be at least as efficient as a silicon.”

While the research continues, Hao said we might start seeing her technology in our lives within the next five to 10 years.

“There are lots of different applications for these thin-film solar cells, such as solar buildings and solar cars. They can also be put into wearables,” she said.

“We are extending our research area to the deployment stage. While further improving the cell efficiency, we need to foresee and solve future problems during the integration with buildings and vehicles and other surfaces, and it is important to start now.”

“There’s a lot of discussion about using solar farms for electricity and fuel generation. My hope is that our work can contribute to both.”
Associate Professor Xiaojing Hao

If trying to convert the world to solar energy wasn’t enough, Hao is also collaborating with her colleagues at UNSW on the development of solar fuel — namely the effective conversion of solar energy into chemical energy.

“What we are doing for the solar cells is designing and making high-quality light harvesting materials, and then managing to get the sunlight generated charge carriers, for example electrons, efficiently flowing out of the solar cell device and generating electricity,” she said.

“Alternatively, instead of being collected for electricity, these electrons from our designed materials and devices can be directly used for water splitting generating hydrogen, and C02 reduction.

Her team is involved in the process, Hao said, because the design to get the electron to flow smoothly out of the device can also be used for solar fuel generation.

“There’s also a lot of discussion about using solar farms for both electricity and fuel generation. My hope is that our work can contribute to both,” she said.

Engineering a better future for people with disability

Engineering a better future for people with disability