A customised electric Renault is helping researchers in Brisbane understand the human-machine interface of automated cars and the challenges they will face on Australian roads.

Accompanied by an expert driver, the volunteers provided data on how the automated driving system interacted with the person behind the wheel. The trial was interrupted by Brisbane’s recent snap lockdown, and will continue for two days this month. 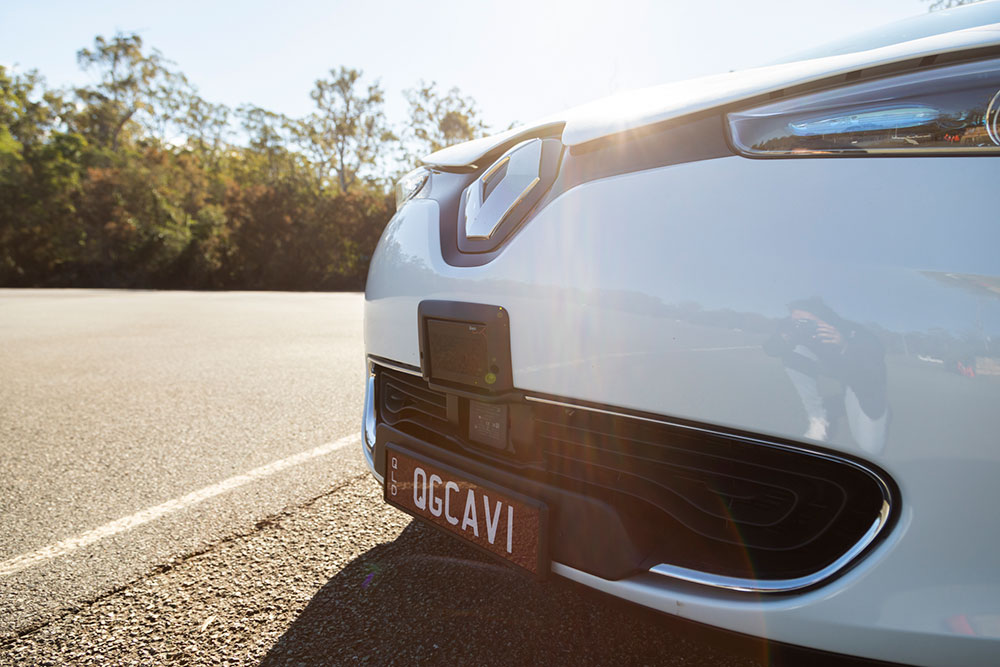 ZOE2 is one of two research vehicles commissioned by the Queensland Department of Transport and Main Roads (TMR) Cooperative and Highly Automated Driving (CHAD) Pilot.

In 2019, the first vehicle (ZOE1) embarked on a three-month, 1200 km road trip around South East Queensland to investigate how the automation AI performed in a range of conditions.

CHAD pilot lead and Engineers Australia member Amit Trivedi told create the trials would help TMR and their CHAD research partners at the Queensland University of Technology (QUT) understand how long it will take for automated systems to hand back control to the driver, and what human factors will be at play during the transition to manual control.

TMR also plans to display ZOE2 at the ITS Asia Pacific Forum later this month, and in the regional town of Charleville in May.

From France to Brisbane

ZOE2 was built in France from a stripped-back ZOE electric car. It was kitted out with automated systems, LIDAR and a range of sensors and cameras. Each sensor package had to be tuned, calibrated and tested on a track before it was accepted. But during road trials in Brisbane, the CHAD team discovered some of the sensors were mounted too low for the hilly terrain, as they had been calibrated on flat roads.

This challenge is yet to be resolved, and a good example of the need to test automated cars in Australian conditions.

The researchers have full access to the car’s controller area network (CAN) bus, which is usually encrypted.

“This gives us access to all the data,” Trivedi said.

Aside from the colourful decals and discreetly mounted LIDAR on its roof, ZOE2 doesn’t look that different to an ordinary Renault ZOE hatch. This was the result of careful design.

“The designers paid specific attention to make sure it was what a future car on the road would look like,” Trevedi said.

As a cooperative automated vehicle, ZOE2 is connected to the 5GHz network, and communicates with nearby vehicles and infrastructure. On returning to Australia, the CHAD team also had to trouble-shoot issues with connectivity through local mobile providers.

ZOE2 can operate at a range of automation levels — from full manual control (Level 0) to Level 4 conditional automation. In this mode, when the conditions for automation are met, the car will drive itself. If human intervention is needed and not available, the car will safely turn and park on the left-hand side of the road with its hazard lights on.

It can also self-drive in cooperative, or “horse” mode, which prompts humans to confirm actions on a screen when visibility is limited.

Trivedi described full automation (Level 5), as a “couch on wheels” that would take you wherever you want, whenever you want. But this is still a long way from becoming reality.

According to CHAD team member and acting Director of the QUT Centre for Robotics Professor Michael Milford, the date when fully automated cars will grace our roads is a “trillion dollar question”.

While Level 2 automated vehicles (such as Teslas) are already out there, both Trivedi and Milford said they are unlikely to make up a large percentage of private transport in the short term. And while ZOE2 has demonstrated Level 4 automation up to 50km/h in research trials, Trivedi said there was still a lot of work needed before this level of automation will be accepted by passenger vehicle regulators.

Milford said there were two major challenges to the adoption of automated car technology: achieving perfect, or near perfect, performance (likely better than humans), and justifying the expense of the research and development effort with a big payoff.

“Both need to be solved, one can’t really compensate for the other,” Milford said.

Factors such as data sharing, privacy, public trust and the ethics of algorithms will also play a part in the future development of automated vehicles. In spite of the obstacles, Milford emphasised the need to persevere.

“We need to make sure to realise the potential benefits of these exciting technologies for those who couldn’t otherwise drive, for those with limited access to other forms of transport, and as a tool by which to improve transport outcomes for everyone,” he said.

How this engineer is improving speech recognition for young tech users

How this engineer is improving speech recognition for young tech users