Tunnelling specialist Paul Thomas says Melbourne’s Metro Tunnel is one of the most challenging he’s encountered.

Since 2019, four 1100 t tunnel boring machines have been carving twin nine-kilometre railway tunnels beneath Melbourne. As the machines tackle the final stretch, create spoke to chartered engineer and tunnelling specialist Paul Thomas about the challenges involved.

The 6.3 m-diameter tunnels and five new stations will add a new rail line to ease pressure on Melbourne’s busy train network. Combined with the new High Capacity Metro Trains, the aim is to increase peak hour capacity by half a million passengers per week.

Paul Thomas, Deputy Director at Rail Projects Victoria, has been with the project since its early days. Thomas is a Chartered member of Engineers Australia, with three decades of major civil engineering project experience — including underground rail projects in Singapore, Hong Kong, India and Saudi Arabia. He says Melbourne’s Metro Tunnel is one of the most challenging he’s encountered.

As well as the TBM-made tunnels, there are mined caverns, which are the two major stations under Melbourne’s CBD, three box stations with diaphragm walls and deep bored piles, and complicated geological conditions (including siltstone, silts, gravels and basalt) beneath the Yarra River. To top this off, the project needed to minimise disruption to Melbourne’s busy centre, universities, businesses, hospitals and residents.

“If you mix it all together it makes a very complex project,” Thomas said. 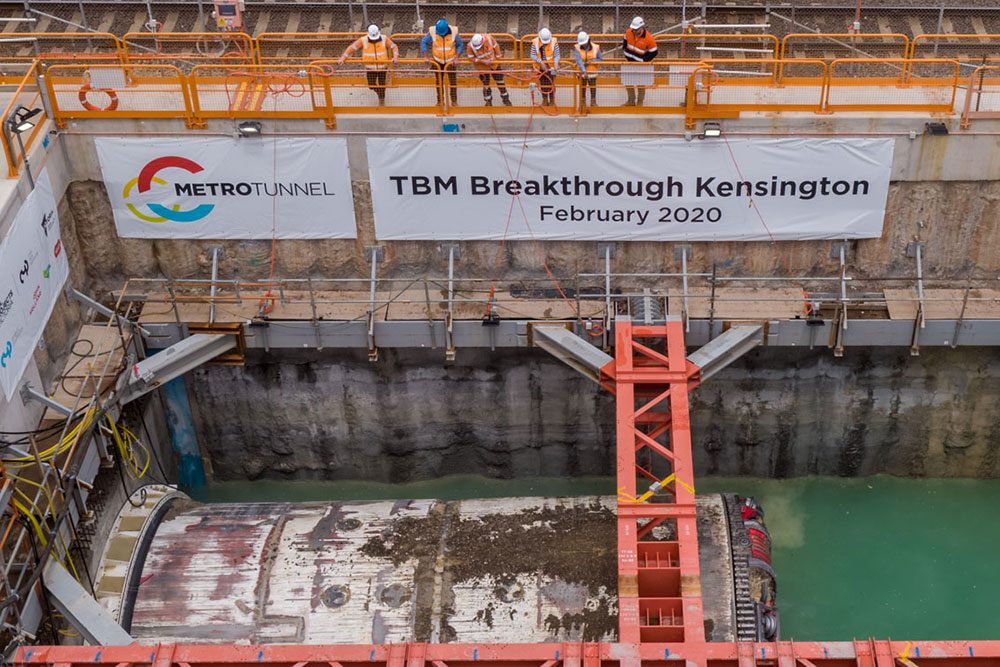 When combined with its ‘back up’ support structures, each TBM is 120 m long — about the same length as three E-Class trams lined up end to end. They operate 24/7, with crews of up to 10 people, and include an office, kitchen and toilet.

Boring tunnels safely through rock is a slow process. At the business end of the TBM is a 7.28 m cutterhead, which mines around 91 m of tunnel per week (on average).

As it advances, the TBM installs concrete rings to line the tunnel. Each 1.7 m long ring is made up of six precast concrete segments, and weighs about 25 t. In total, 56,000 concrete segments will line the completed tunnels.

In total, 56,000 concrete segments will line the completed tunnels.

Thomas describes this as a “start-stop excavation process”.

“The concrete ring is formed within the TBM shield and then the TBM pushes off the completed ring and starts the excavation cycle again,” he explained.

At time of writing, the tunnels were more than 85 per cent complete. TBM Joan and TBM Millie had completed their journey to Town Hall Station, 28 m beneath Swanston Street in Melbourne’s CBD.

Thomas told create he expected tunnelling to complete by mid-year, with the arrival of TBM Meg and TBM Alice at Town Hall Station.

He will mark the occasion with a small celebration, but pointed out there will still be work to do.

“We need to pull the TBMs out, take the services out of the tunnels, and complete the cross passages,” he said.

“And we’ve got to fit the tunnels out to receive the mechanical and electrical installations, track slab concrete and rails.”

One of the project’s biggest challenges was constructing close to existing buildings and underground rail tunnels, including Melbourne’s City Loop.

The project also tunnelled about 7 m beneath the Burnley Tunnel in the East and within 3 m of the existing Western Viaduct piles.

Detailed geotechnical investigations and analyses conducted before the project started was key.

“We tunnelled close to the existing rail tunnel, which remained operational.”
Paul Thomas

“Knowing what the ground characteristics and predicted behaviour were like, we could predict with a great deal of accuracy how the adjacent and above ground structures would perform when we were tunnelling and excavating quite close to them,” Thomas said.

The project also installed about 12,000 individual monitoring devices to keep tabs on movement around Melbourne’s historic and significant buildings, as well as the underground movement on completed tunnels and structures.

“The system will tell us very quickly if we’ve got a problem in terms of ground or infrastructure movement,” Thomas said.

As well as sophisticated technology, the Metro Tunnel owes much to the expertise of engineers from Melbourne and overseas, and highly a skilled tunnelling and underground workforce.

“We’ve got very good people delivering these works, and I think we should always recognise that,” Thomas added.

Interested in the design, construction and utilisation of underground space? Learn more with the Australian Tunnelling Society.