Building a sustainable, dementia-friendly home in the desert

Think of the place you’d like to grow old. What is your house like? Is it a stable, solid structure? Can it change with you? Or adapt to fit your needs as you age?

When coming up with a design for the 2018 Solar Decathlon in Dubai, Associate Research Fellow Clayton McDowell MIEAust from the University of Wollongong’s (UoW) Sustainable Buildings Research Centre decided to look beyond building a house. Instead, he wanted to build a home to fit an ageing population, particularly those living with dementia.

“The problem that we have in Australia is about 70 per cent of people living with dementia actually live in the general community, not within an aged care setting,” McDowell told create.

“And those numbers are only increasing.”

The Solar Decathlon is an international competition where students across the world compete to design and build a solar-powered house that is both cost-effective and attractive. Entrants are judged on several categories such as architecture, engineering, construction, energy efficiency, house comfort and function, sustainability and innovation.

McDowell and his team, made up of student volunteers from the UoW and New South Wales TAFE, created Desert Rose House, a sustainable, open-plan home that can be adapted to fit the needs of people living with dementia as the disease progresses.

The project, which took out second place in Dubai, was recognised with an Australian Engineering Excellence Award recently.

“There are a lot of things to consider when building a house for people living with dementia,” McDowell said.

“In Australia, about 70 per cent of people living with dementia live in the general community, not within an aged care setting.”
Associate Research Fellow Clayton McDowell MIEAust

“If the ground is too reflective they might think it’s wet or slippery and might not walk on it. But if it’s too dark they might see it as a literal bottomless pit.

“Even things like line of sight need to be considered. If they wake up and can see the toilet bowl itself, they’re up to eight times more likely to use the bathroom. It’s like a memory jogger.”

Being able to see things may be a big benefit to dementia patients, but large open spaces are not always conducive to sustainable heating and cooling, especially when the house is in the middle of the desert.

“We went through a lot of thermal modelling and lighting modelling to make sure that we created the most sustainable space,” McDowell said.

“Our biggest energy concern over in the Middle East was always going to be cooling.”

This was particularly important as an element of the competition is to keep the house between 23 and 25 degrees.

“Since my research was on low-income elderly people, we wanted to think of ways to keep it passively cool to save as much money and energy as possible,” McDowell said.

Counterintuitive to most housing in hot climates, Desert Rose has high ceilings. This allowed the team to install windows that let in a lot of natural light, avoiding additional costs trying to keep the house lit up.

All the windows face away from direct sunlight, meaning they let as little heat in as possible.

In addition, the living spaces have retractable partitions, allowing users to close off areas in times of extreme heat so they only need to cool the space they are using.

It also helps that the house is cooled by a purpose-built HVAC system.

“We actually designed our own system and pulled parts from right across the globe,” McDowell said.

“We have some of the only pieces in the country from Daikin units.”

“Since my research was on low-income elderly people, we wanted to think of ways to keep the house passively cool to save as much money and energy as possible."
Associate Research Fellow Clayton McDowell MIEAust

The HVAC system uses an air-to-water heat pump to handle the general cooling of the house. In a separate unit is the Daikin part, which has desiccant crystals. This, coupled with the heat pump, dehumidifies incoming air before it goes through two fan coil units. This means the air is already partly cooled before reaching the fan coils, reducing energy usage.

However, the team took it one step further by creating their own phase change material thermal storage tanks. The tanks act as a 35 kWh liquid thermal store, which is cooled overnight and used during the middle of the day to drive the fan coil units.

McDowell was quick to point out that the cooling system needed to be oversized as part of the competition involved allowing for groups to tour the house.

“It’s not a normal house during competition mode, you might be touring 1000 plus people through,” he said.

“So you actually typically have the house open during the middle of the day and then at the end of touring time, you are given 30 minutes to cool the building down. So our air conditioning systems are a little oversized to be able to cool everything quicker, which costs us energy.” 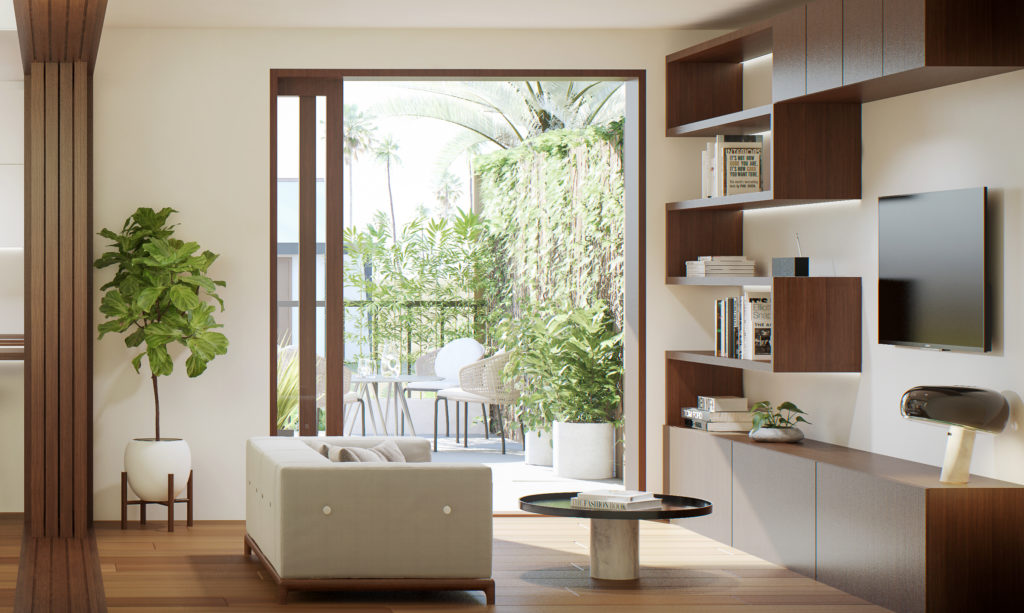 Another innovative aspect of Desert Rose is the Model Predictive Control System, which helps the air conditioning unit predict how much energy it will need throughout the day.

“Current air conditioning units look at ‘what’s the temperature right now? And what temperature do you want it to be?’ and it makes a decision based on those two inputs,” McDowell said.

“What this does instead is that it models the house and it predicts how much energy it’s going to need over the next 24 hours.

“We input what the weather is going to be, how much solar we’re going to generate, and the typical energy consumption of the users in the house. It also learns the user’s energy habits over time, so [it] knows whether to charge the batteries or discharge them. It can also alert residents to things like ‘now is a great time to run your dishwasher’ so we can maximise and squeeze efficiency gains out of every element of the house.”

“The system learns the user’s energy habits over time, so it knows whether to charge the batteries or discharge them.”
Associate Research Fellow Clayton McDowell MIEAust

They say it’s what’s on the inside that counts, but when trying to cool a house in the desert the UoW team found that what’s on the outside is also very important.

Desert Rose uses solar panels to power the house, which presented another  challenge: while it is important for the panels to get enough sunlight, if the whole house is baking in the sun all day it makes cooling very difficult. So the team created an innovative solution to shade the house.

“We looked at ways to actually completely shade the entire house,” McDowell said.

“And so for all the walls, we ended up building what we call the ‘second skin wall’. Or in reality, would be termed a double skin facade.”

The facade is made out of aerated, lightweight concrete.

“In Dubai and the UAE in general, one of their favourite building materials is concrete,” McDowell said. “But like most countries, they also have a lot of waste products, so our concrete wall is actually made of concrete and crushed up, recycled glass.”

The second skin sits about 100 millimetres off the wall, and McDowell said at one point the skin surface was about 17 degrees hotter than the wall behind it.

The skin has a lot of holes to aerate it further, which also makes it an architectural feature that can be lit up at night.

While a specialty HVAC system and second skin wall may sound complicated, McDowell said many of the products the team used can be bought off the shelf in Australia.

“Minus a few tricks with the second skin and the air conditioning, neither of which you would need in Australia, we bought everything right here so it could be replicated by pretty much anyone,” he said.

“The layout, I think, could be used and perhaps should be.”

McDowell said the house was designed to be adapted over time, right up until someone’s final days.

“In a lot of homes, it’s very difficult for an ambulance to come in or get a stretcher to people,” he said.

“We focused on ‘how do we actually get that stretcher straight into the bedroom?’ And, more importantly, we made it so that people could have a hospital bed if they chose their last days to be in the house.”

As for making homes more sustainable, McDowell said there’s a lot we could be doing better.

“I view a house as a machine, and really every home probably should come with a manual on how to operate it. ‘What’s the best time to open and close the windows in your location during summer or winter? — stuff like that. So that you can get the most out of your building.”

This engineer is developing a mesh scaffold that stimulates bone formation

How to fight corrosion

How to fight corrosion