Cutting-edge technology is helping to build a new home for the Western Australian Museum’s impressive collection.

Rising from the shadows of its neighbouring buildings, the steel skeleton of the new Western Australian Museum cuts a hulking profile in the sky.

Located in the Perth Cultural Centre on the site of the museum’s former incarnation, the $395.9 million project will be up to three times bigger than its predecessor and feature 6000 to 7000 m² of gallery spaces.

As part of the project, builder Multiplex is carrying out structural steel works to upgrade three state heritage buildings on the site to meet new seismic requirements.

The project also encompasses a completed $17.1 million research centre in Welshpool, which will house the museum’s wet collection of specimens.

Prior to redevelopment, the museum comprised four heritage buildings, which posed accessibility issues.

Multiplex’s design team of Hassell and OMA have designed this project so the public can view the different parts of the museum in snippets rather than having to experience the whole museum at once, he said.

The heritage buildings, which date back to the Swan River colony, form a rough L-shape on the site’s perimeter and consist of the Old Perth Gaol (built circa 1855), Hackett Hall (built 1913), and the Jubilee Building (built circa 1903).

Van Heemst said constructing the new building, which sits in a corresponding L-shape on the only on-grade area of the site, presented some challenges, with the southern core in close proximity to Hackett Hall.

“We had very finite controls around vibration and subsidence, with regards to making sure we protected the heritage buildings,” he said.

“During early site works, we were required to undertake a fair bit of microfine cement grouting to the existing foundations so as to not undermine the existing footings and cause any damage to the heritage fabric.”

An added challenge to maintaining the site’s foundation integrity was the need to heavily load the new museum’s cores to the equivalent of a 30-storey building.

BG&E structural engineer Harry Seward explains that both cores have pile foundations down to the bedrock, with the northern core differing slightly to accommodate an altered basement level.

The original building design accounted for a basement exhibition space, but it has since been relocated to level one, with the remaining basement level designated for secure storage facilities.

“We created the basement in a top-down approach, so the core actually piles from ground level down to basement level as opposed to concrete floors, which is more conventional,” he said.

The top-down basement approach let the project team save time and build up while, at the same time, establishing contiguous piled walls for the basement and digging out the remaining material.

Seward explains that the new museum is a steel structure, with most of the primary load paths relying on steel, along with some concrete slabs.

“There are no support columns in the galleries, so we have a lot of high-strength trusses spanning 30 m through the centre and 20 m spanning primary beams,” he said.

“The main western truss spans 50 m in addition to a 17 m cantilever over Hackett Hall as a way to incorporate the heritage building into the new structure.”

The team used Grade 450 steel for the project, delivering a 25 per cent weight reduction compared to standard grade steel and a 15 per cent cost saving.

Multiplex Project Engineer Marco Neves said one of their main challenges was arranging delivery of the steel components on a compact project lot of approximately 11,565 m2 on a site bordered by two busy roads and multiple heritage buildings.

“We had to ensure steel was delivered in the order that it was needed, but we also had to factor in the weight of the steel components,” he said.

“This determined whether we were able to pick it up from Francis Street — directly adjacent to the new building — or from down on James Street, at the south of the site

“For that decision to happen we had to think of it when we were doing the shop drawings and coordinate the pieces of the puzzle.”

Most trusses were delivered on Francis Street and lifted on a dual crane for pieces up to 45 t. The team used the project’s sole tower crane, strategically placed in the middle of the construction site, for loads up to a 20 t capacity.

The segments were subsequently assembled and put into position with a bell crane.

Once complete, the museum will boast seven major galleries, including a 1000 m2 temporary exhibition space on the first level of the new building, and additional spaces for a cafe, learning spaces and retail outlets.

The project team will finalise base requirements and hand over some gallery spaces to museum staff towards the end of this year in preparation for the museum’s opening in 2020.

With the Perth Cultural Centre site expected to open in 2020, Western Australian Museum staff are working to showcase the state’s cultural diversity to the world.

New Museum Project Director Trish McDonald told create that the museum will use the latest technologies to exhibit its vast collection of artefacts and specimens.

“There will be meteorites, dinosaurs, animals from WA’s past and present, objects and stories from WA’s diverse Aboriginal communities, objects from our colonial past, to stories and issues we are facing today and into the future,” she said.

“We will be bringing back our iconic blue whale skeleton, which is remembered and loved by generations of Western Australians — and it’s also one of the largest specimens we’re preparing.”

The new museum will have 1000 m2 of temporary exhibition space, up from 400 m2 in the old museum, giving staff the space and technical capacity to present special travelling exhibitions from around the world, including from national museum partners, as well as homegrown exhibitions.

They project the Perth Cultural Centre site will cater to several thousand visitors per day — up to 450,000 annual visitors. Combined with the museum’s five other public sites, that amounts to one million visitors each year. 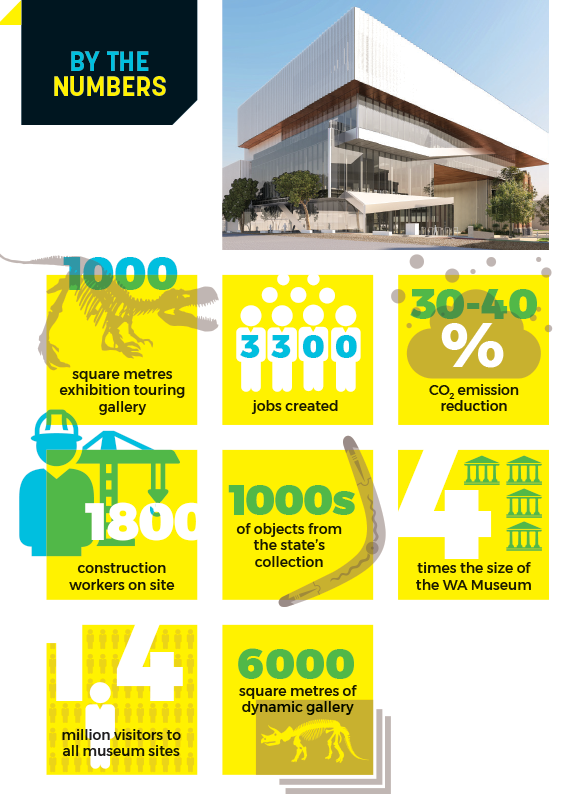 McDonald said the Centre offers a safer, modern environment for the museum’s researchers and their visiting national and international counterparts to conduct research into Western Australia’s biodiversity.

“It also means we have more space to work on the artefacts and specimens to prepare them for display in the new museum,” she said.

The project team has upgraded the existing mechanical and electrical facilities that service the Art Gallery of Western Australia, the State Library, Perth Institute of Contemporary Arts, the State Theatre and the Blue Room Theatre, and amalgamated a lot of the services in the precinct.

The team installed a cooling thermal plant (producing about 6 MW), including associated cooling towers, and a heating water thermal plant (about 3 MW) at the art gallery and library to service surrounding buildings.

Heemst said the museum will have its own air-handling units but will use the cooling towers and chillers from the precinct.

This article originally appeared as “Showcase work” in the April issue of create magazine.