Elevar Sports is one company rethinking the cricket bat.

Cricket is an old sport that takes its traditions very seriously. That hasn’t stopped engineers from dreaming up new equipment to help when bat meets ball.

In a December 1979 test match in Perth, Dennis Lillee walked out with an aluminium bat, and so upset England captain Mike Brearley that he threatened to take his team off the field.

When Brearley claimed that the aluminium bat was damaging the ball, the umpires told Lillee to change it for a wooden bat.

Lillee did, eventually, after a lot of fuss, but not before he had flung the bat across the field in front of thousands at the ground and millions watching on TV.

Soon after, cricket’s rule-makers, the Marylebone Cricket Club (MCC), banned the bat and decreed that all bat blades must be made solely from wood.

Lillee’s bats, made by West Australian manufacturer Comalco, had to be scrapped, costing Lillee his $50,000 investment. 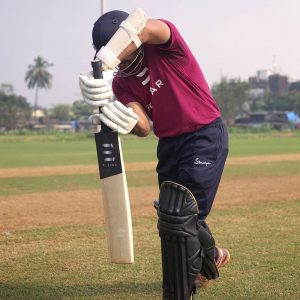 Wood has not been immune to efforts by bat-makers to work out new ways of making their bats better. In the 1970s, Gray-Nicholls scooped wood from the back of a bat and put it near the edges to make the bat’s sweet spot wider. The following decade, Newbery moved some wood from the bat shoulders towards the bottom end, named this club-like bat Excalibur and gave one to big-hitting New Zealander Lance Cairns.

Unfortunately, neither innovation gave a significant advantage over traditional bats, which back then tended to be flat with the wood more evenly distributed across the blade.

From the mid-2000s, the rise of T20 cricket saw bat-makers start designing bats with huge, deep middles and thick edges. These monsters looked too heavy to swing for all but the strongest players, but improvements in pressing technology and moisture removing processes had enabled modern bat-makers to reduce a bat’s weight without reducing its thickness. As a result, the batter could swing the lighter bat faster.

Now, pretty much anyone could smash the ball out of the ground. And it spurred the MCC to action again.

In 2017, cricket’s rule-makers decided to limit the maximum depth of a bat to 67 mm and the thickness of its edges to 40 mm. They felt that the new chunky bats gave the batter an unfair advantage, just as Lillee’s aluminium bat had done.

Cricket is unusual among sports in that it features two players performing two different skills — bowling and batting — against each other, at the same time, within a team context.

Unlike baseball, where pitchers throw at hitters on the full, the surface on which the bowler lands the ball adds more variables and ambiguities to the contest. Traditionalists feel new innovations too easily disrupt this dynamic.

“The rules are so prescriptive about what bats are made from, and the design, that all you can really do [to change things] is distribute weight around the bat in different ways,” said Ian Callen, a former Victorian fast bowler who played his one test match for Australia the year before Dennis Lillee’s aluminium antics.

Not much leeway then, but enough to challenge a few cricket-mad engineers.

“You [can still] measure some aspects of how a bat behaves to understand how it works and use this understanding to improve the performance,” said David Curtis of the Sheffield Hallam University’s Centre for Sport and Engineering Research in the UK.

“You can still measure some aspect of how a bat behaves to understand how it works and use this understanding to improve the performance.”
David Curtis

To this end, Curtis is particularly interested in how the ball rebounds from the bat after contact.

“This can be worked out by considering simultaneously the velocity of the bat as it is swung, and its mass at point of impact,” he said.

At point of contact, there are two opposing forces working on the batter’s hands — the ball hitting the bat and pushing it backwards, and the forward momentum of the hands. This can cause a lot of jarring in the hands and wrists unless the ball strikes the sweet spot.

The sweet spot is the place on the bat where maximum energy is conveyed to the ball with the least amount of vibration. A larger sweet spot means a greater proportion of the bat is used to strike the ball, so a lighter bat is nonetheless able to deliver more power.

When the ball strikes this spot, the two forces cancel each other out.

“At this point you’re on a vibration anti-note,” Curtis said. “You barely feel the ball against the bat when you hit it.”

Wood has more give in it than metal: a lower coefficient of restitution. Curtis explained that, with a metal bat, the exit velocity of the rebound is the same as when the ball went in, so no velocity is lost.

“At this point you’re on a vibration anti-note. You barely feel the ball against the bat when you hit it.”
David Curtis

“This is why Lillee’s aluminium bat damaged the ball,” he said.

In 2016, researchers from the University of the West Indies performed a structural analysis on a wooden cricket bat and located a sweet spot about 100 to 150 mm from the bat’s toe, just above the swell area where the bat is at its thickest.

They found another sweet zone 200 mm from the base of the handle, at the point where the handle connects to the shoulder of the bat.

It’s not just blade design that can minimise vibration and maximise energy exchange at the point where the bat strikes the ball.

What’s in the handle also makes a difference.

“Bat handles are made mainly of cane, wood and twine, but manufacturers use different configurations of materials as strings inside the handle to absorb induced vibration and improve comfort,” Curtis said.

Today, bat handle strings must be made of rubber. The MCC decreed so in 2008, this time after bats started appearing with carbon fibre and graphite strings.

These inserts reduced vibration and made the bats too powerful, MCC officials believed.

At the time of the ban, Kookaburra was experimenting with a fibreglass handle, while researchers at RMIT University’s School of Aerospace, Mechanical and Manufacturing Engineering had developed a carbon fibre handle with a polymer insert that reduced vibration by 42 per cent.

None of that is permitted now. But engineers in India say that they can reduce vibration without breaking the regulations. Instead of using new materials, they have changed the shape of the bat handle to fit a batter’s hands.

Some bat handles are oval; others circular. But while engineer Aayush Tapuriah, co-founder of Elevar Sports, was overseeing mould studies to help discover the optimum shape, he realised that the perfect bat handle would be a combination of the two.

Cricketers have always known that batters get power from their bottom or stronger hand, which grips the bat in one fixed place at point of contact. The weaker hand controls the bat, and needs to move around slightly to move the bat into the required position. The top hand points thumb down and the bottom hand moves to thumb up as the bat is manoeuvred.

“We looked at other handheld objects that require similar precision in the handle — samurai swords, knives — and found that they never have round handles, more a ridge shape,” Tapuriah said.

“Hold your fist. It’s not a perfect circle. The bottom of the handle has more rounded edges like a racket or bat.”

Placing a grip made of silicon, used for vibration dampening in industrial applications, under the traditional rubber grip, reduces vibration further.

“We looked at other handheld objects that require similar precision in the handle — samurai swords, knives — and found that they never have round handles.”
Aayush Tapuriah

Lillee designed his aluminium bat for recreational use, too, thinking it would be ideal for backyards and schools, or parts of the world where it rains a lot and people play on wet, muddy surfaces.

“Dennis would hit it hard and it would just about reach the fielder,” said Geoff Dymock, Lillee’s batting partner at the time of the incident. The Australian captain at the time, Greg Chappell, says he turned down Lillee’s offer to use the bat during net practice.

“I told Dennis that I didn’t need to try his bat,” Chappell said. “I’d seen and heard all I needed to see and hear when he was using it.”

Callen chuckled, saying, “We’ll never really know how good that bat might have been.

Sadegh Mazloomi, a mechanical engineer at the University of British Columbia, Canada, has designed an algorithm that he says works out the optimal position on a bat for its “sweet spots”.

“If you move these points closer to each other, you get a bat that provides less vibration — when bat strikes ball — and more rebound energy transferred to the ball,” he said.

Mazloomi calls his prototype “Algobat”. Like Dennis Lillee in the late 1970s, he hopes that his work will enable high-performing bats to be made from affordable low-grade materials — but this time without upsetting opponents, umpires and rule-makers.

These are the world’s top universities for engineering