Sydney to Melbourne in 40 minutes? Meet an engineering team from Sydney that is trying to make this a reality through hyperloop travel.

For the past few years, hyperloop hopefuls from around the world have been trying to bring eye-watering travel speeds of 1200 km/h closer to reality. If it can be done, it would change everything from commutes to communities to commercial delivery and beyond.

One team for this year’s Hyperloop Pod competition isn’t looking to triumph in overall time trials – at least not in its first year. UNSW Hyperloop has taken a different course, emphasising reliability, safety and redundancy in their design, said Project Manager Harry Zhang.

Having said that, their pod could go as fast as 330 km/h in the near-vacuum tunnel, which is ”quite significant compared to the other non-German teams”, he said, and up to 0.6 Mach next year.

UNSW Hyperloop’s approach has impressed SpaceX engineers, earning them a place among only 22 teams (whittled from more than 2000 applicants) at the upcoming 2019 Hyperloop Pod Competition.

“Many teams in the past have faltered due to component malfunction or failure and, due to the extent of their system integration, were unable to repair or replace components effectively.”

Qualifying for the event, to be held at SpaceX headquarters in Hawthorne, California on 21 July, was a challenge amplified by the tight time frame to which the 24-person team was working.

The team was only founded in September last year, and their proposal was accepted in February. They are the only Australian team to qualify for the competition.

In the time between, they had to go through multiple rounds of elimination, completing intent to compete, preliminary design package and final design package reports. Much of this was during internship and/or work time for the team during summer.

“We definitely lost a lot of sleep over it; I probably averaged about three to four hours a night but we got there, and went on to an actual interview with SpaceX engineers,” Zhang told create.

“That was a rapid fire Q&A, qualifying whether we’d thought at a critical level about all the aspects of our design.”

According to the project manager, the judges were impressed with the practicality of the UNSW Hyperloop design.

Next year they might consider working with a manufacturer and designing a new battery. The drive system this year is supplied power by a 44.4 V lithium-polymer (li-po) accumulator. A smaller, independent 12 V lithium-ion battery independently powers pod telemetry, navigation and control systems.

“They are off the shelf, making them relatively inexpensive to source, highly replaceable and quality tested in being safe,” Zhang said.

“If there are operational problems that will not allow for the part to be transported, or it fails in transport, we can easily buy new replacements through various vendors on site.”

The li-po cell will be pressurised to 1 bar. Tests of the cell arrangement at 85 per cent vacuum have been conducted to demonstrate its integrity.

The other battery “is already built fully encased and does not have the same volatility risks as li-pos, and thus presents a failsafe for telemetry functionality in the case of accidental battery housing decompression”, Zhang added.

The braking system is also created to be as practical as possible. A magnetic brake at the back might fail, but there is redundancy built in through an additional frictional brake.

“If that does fail, our frictional brake has been designed in such a way that it can still stop the pod at high speeds without damaging the rail, preventing us from blowing out the back of the tube,” he said.

Most of the pod is carbon fibre composite and aluminium by weight, with these making up the shell and chassis respectively. Industry partners are helping train students in the use of these materials. 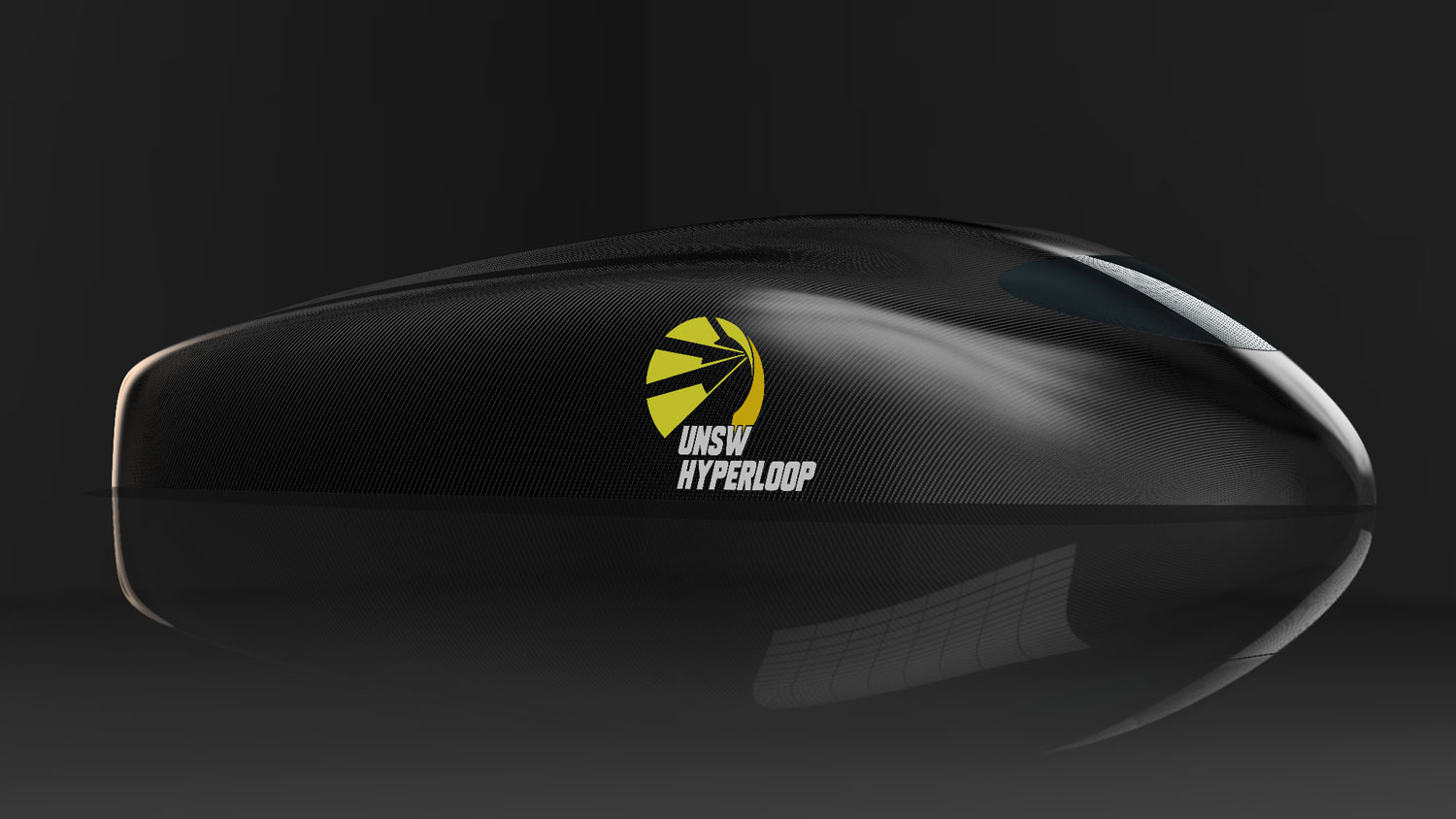 Each pod will travel through 1.2 km of steel tube, with a new requirement this year that they “be designed and tested to propel themselves within 100 feet of the far end of the tube before stopping”.

The event’s favourite is the Technical University of Munich WARR team, which has top honours at all three events so far and set a record speed of 457 km/h last year.

Team UNSW Hyperloop is not looking to beat the Germans’ record, but aims to follow RMIT’s VicHyper team and shine through technical achievement. VicHyper won a Braking System Technical Excellence Award in the 2017 competition.

The UNSW Hyperloop team, which is working under the Engineering Faculty’s Future Vehicles initiative, hopes to develop their contributions to the open source Hyperloop community over several years, and that this year they can excel through their practical approach. When the concept makes it into the real world, practical thinking will of course be vital.

“One of the goals has been to win the innovation award for this round of competition. I think it’s a good thing to bring back,” Zhang said.

“I mean, TUM is the clear favourite and German engineering has always been something else, but we’ll be doing our damnedest!”

Electric flight could take off for short-haul flights by 2022

Electric flight could take off for short-haul flights by 2022