There are plentiful opportunities and fascinating engineering challenges in the future of hydrogen, currently considered a vital ingredient in the energy mix that will help us achieve net-zero emissions. Much of the pioneering work has already begun.

If Australia is to decarbonise its economy to address climate change, says Chief Scientist Dr Alan Finkel CPEng FIEAust, it must use all of the tools at its disposal.

But electrons are not enough. Ten to 20 per cent of our energy needs must be transportable and able to be stored as a molecule — as a fuel. That molecule will be hydrogen, or a hydrogen derivative, which can be produced by solar, hydro and wind. It could also be produced through the use of fossil fuels, with the incidental carbon dioxide captured and permanently stored, Finkel said.

“Hydrogen is the ideal complement to a zero-emissions, electric-energy future,” the Chief Scientist said.

It won’t just be in the production and storage of energy that hydrogen will play a vital role in emissions reduction. It will also help to clean up previously polluting industries, such as transport.

10-20% of our energy needs must be transportable and able to be stored in molecular form.

“There are great applications in the transport sector for hydrogen, in particular in heavy duty and long-range applications,” Hetherington said. “And also, the potential use of ammonia in shipping is an emerging area that’s quite interesting.”

Even more beneficial from an emissions point of view would be the use of hydrogen in steel manufacturing. This is where we begin to see its potential to make a significant difference.

“The manufacturing of steel is responsible for seven per cent of carbon dioxide emissions globally,” Finkel said. “That’s a massive quantity, and it’s because it consumes huge quantities of metallurgical coal.

“That coal is used for two purposes, primarily. One is for heating up the iron oxide and melting it into a slag in a blast furnace. The other use of the coal is its carbon content being used as a chemical agent, called the ‘reducing agent’, to reduce the iron oxide to its elemental form.

“The carbon does that by chemically grabbing the oxygen off the iron oxide, binding to it, and going off into the atmosphere as carbon dioxide. In future, renewable electricity can provide the necessary heat, while hydrogen can be used as a chemical reducing agent to chemically grab the oxygen, bind it and go off into the atmosphere as dihydrogen oxide — otherwise known as water.”

With a combination of renewable electricity and clean hydrogen, the steelmaking industry could eliminate the source of seven per cent of carbon dioxide emissions.

“This is staggering,” Finkel said.

Cleaning up other industries

One scientist responsible for figuring out how Australia can best use hydrogen is Dr Adrian Panow, Director, Energy, at Deakin University. Panow is a member of the inaugural advisory board overlooking Deakin’s Hycel Technology Hub.

Hycel is engaging with various levels of government as well as industry, community and research institutions to decarbonise our economy through hydrogen. The hub has already developed partnerships in Australia, the US, Sweden and India, including with Kenworth Trucks.

Much of the discussion around hydrogen in Australia, Panow says, has been around potential earnings from the export market. Hycel is instead focusing on opportunities for domestic use, which are substantial.

“One is obviously decarbonisation, particularly of sectors difficult to address with electricity alone – heavy transport and reticulated gas. The other is that we are seeing an increasing amount of renewable generation in the system, and hydrogen serves a very useful purpose there to ensure these resources are dispatchable.

“At Deakin we have a deep expertise in electrochemistry, in membranes, in materials science, in logistics and social science. All will be required to enable a smooth, sustainable transition to a hydrogen economy.”

The Warrnambool campus of Deakin University is well located for this work, being on a corridor used by heavy vehicles as well as large, regional dairy and forestry industries. Warrnambool is also home to one of Australia’s leading bus operators. Deakin is undertaking research to optimise hydrogen fleet operations, including access to refuelling infrastructure.

“One of our objectives is to use the Warrnambool campus as a living laboratory and convert it to 100 per cent hydrogen, if safe,” Panow said.

“That would be a step change in understanding whether it’s a feasible model to use elsewhere, particularly in regional Australia.”

In transport, electric batteries are simply too big for the heavy end of the industry. Even with the most optimistic projections of where electric vehicle technology will move in terms of energy density of batteries, trucking companies would still find they’re being asked to carry too much non-revenue weight.

“Hydrogen overcomes that, as it has a very high energy density,” Panow said.

“Hydrogen essentially means you can continue to use existing lengths of trucks, prime movers and trailers, with ranges of hundreds of kilometres. Moving to a battery, as we’re doing with light vehicles, is very difficult to do in a heavy truck. But hydrogen fuel cells will help with the solution.”

In the natural gas space, Panow says, the only way to reduce the carbon footprint, for heating in particular, is to dilute the carbon. That can be achieved with a biofuel — a biologically produced methane from waste materials, for example — or by providing hydrogen produced from large-scale electrolysis.

“Both of those applications then have a safety element that needs to be addressed, as well as a social licence element – people have to be comfortable to get on to the hydrogen bus,” Panow said. “In many instances it’s not the technology that becomes the barrier, it’s either the economics or the community resistance.” 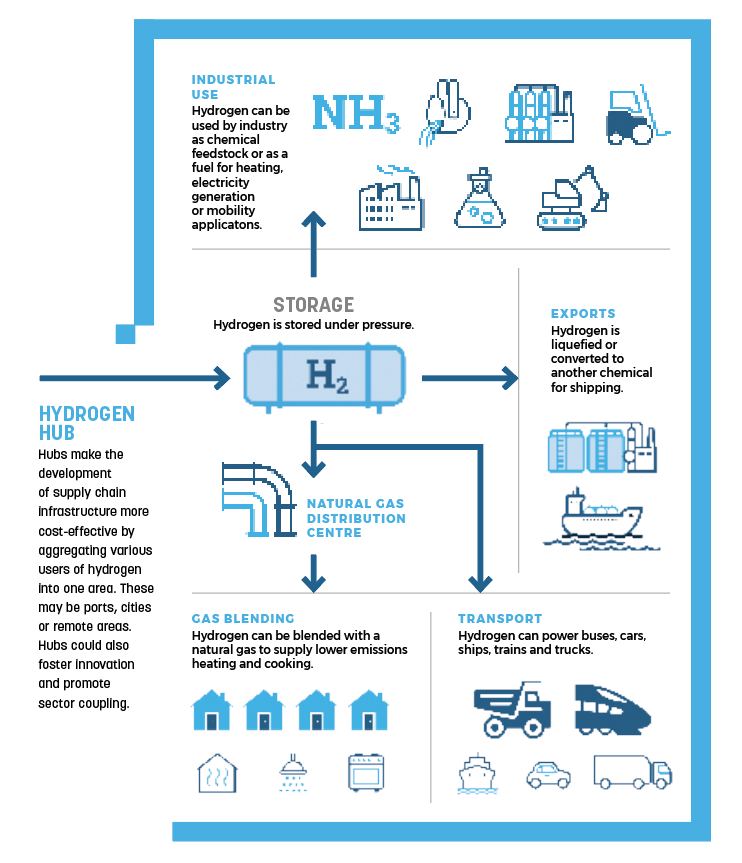 The state of play

Right now, said Dr Fiona Simon, CEO of industry peak body the Australian Hydrogen Council, there are two hydrogen industries in Australia. One is the small market for industrial purposes that already exists: hydrogen produced using fossil fuels without carbon capture and storage. The future market is for clean hydrogen.

“Right now, we’re talking about the future for the grand scale of hydrogen that Australia aspires to,” Simon said.

“We’re very happy to say that the support from the state, territory and Federal governments has been great. Recent investment in new energy technology and extending the lifetime of funding institutions will demonstrate how to close the gap between these more piecemeal demonstrations and the $1.7 billion potential of an export industry 10 years from now.”

What remains to be seen, Simon believes, is how quickly we can pull together the different parts and how well we can coordinate projects in order to build a coherent hydrogen industry.

As of early September, Australia had announced financial support of around $500 million to kickstart hydrogen projects, and, in November 2019, the Australian Government adopted the National Hydrogen Strategy, which sets a vision to create a clean, competitive and safe hydrogen industry and to make it the country’s next energy export.

“In some cases, these other countries making great leaps forward will be Australia’s export competitors, or they could be our customers,” Simon said.

In fact, in mid-September it was announced that the Australian Federal Government had agreed to a joint feasibility study with Germany around the potential for a hydrogen supply chain between the two nations.

“The big commitments being talked about by those European countries, which will also be matched by some Asian countries, are actually critically important,” Finkel explained.

“A lot of that development will be focused on demand, on using the hydrogen for transport and as chemical feedstock. The export opportunity for Australia is entirely dependent on demand building up internationally.

“We have the know-how to do big projects well. We’ve got the customer relationships with export partners. And we can build supply of relatively cheap hydrogen in huge volumes as quickly as demand requires. So, there must be an emphasis on ensuring demand builds internationally.”

According to Finkel, there are numerous roles for engineers in a hydrogen-fuelled future.

“At some stage in the next decade, all new ships are going to have to be zero-emissions ships,” he said.

“They could use hydrogen fuel cells to produce electricity to drive the electric motors connected to the propellers. Ammonia made from clean hydrogen could have some advantages in ships, in modified diesel engines. The advantage of using ammonia is that it’s got slightly better volumetric density, and it also allows reuse of diesel engine technologies.

“But there is a lot of engineering involved in doing that, and in solving long-distance transport issues, in improving the efficiency of electrolysis, in making hydrogen fuel cells and improving their efficiencies, in developing fuel cell electric vehicles rather than battery electric vehicles, in figuring out a way to cost-effectively compress the hydrogen to the very high compression levels required in the tanks of these vehicles. There will be plenty for engineers to do.”

Across Australia, more than $140 million has already been spent on hydrogen projects and another $360 million earmarked. Here are just a few.

A partnership between APA Group and Southern Green Gas, with $1.1 million of funding from ARENA, the Renewable Methane Demonstration Plan is a pilot project looking into creating methane by using solar-generated electricity, water, and CO2 from the atmosphere. The initial plan is to produce 620 kg of hydrogen per year, which is converted to 74 GJ of methane that is then pumped into APA’s natural gas lines.

The decommissioned automotive manufacturing plant at Altona in Victoria has been given new life as a renewable energy hub. The goal is to turn the site into a Zero-Emission Centre of Excellence that not only produces renewable hydrogen, but which also contains an Education Centre, promoting the power of hydrogen and supporting innovation.

Woodside has established several international partnerships to begin feasibility studies into green hydrogen export. One is with the Korea Gas Corporation. Another is led by Korea Gas Corporation and Hyundai Motor Company, and is looking to develop refuelling station infrastructure. A third is with a Japanese group looking at using ammonia to decarbonise coal-fired power stations.

This project is intended to evaluate and demonstrate the viability of hydrogen fuel cell electric buses for public transport in Australia, including infrastructure requirements for bus systems in up to 10 areas. Partners on the project include Transit Systems, Ballard Power Systems, BOC Limited, Palisade Investment Partners and ITM Power.

On or offshore, this patented paint system keeps corrosion at bay