London spills between 30 and 50 million tonnes of raw sewage into the River Thames each year.

The Thames Tideway Tunnel is upgrading London’s Victorian-era sewer system. Engineers behind the project have discovered skeletons, the challenges of moving masses of water under iconic sites and the remarkable skills of the 19th century designers of the sewer.

London is upgrading its sewer system to cope with its growing population, intercepting, storing, and transferring sewage waste away from the River Thames.

Richard Lewis, Asset Ownership Director at Tideway London, told create that the project builds on the system started in the 1860s by civil engineer Sir Joseph Bazalgette, which helped to wipe out cholera in the British capital.

“It was built by covering over the rivers, known as the lost rivers of London. This means the sewage rivers all run together, so we have stormwater and rain and sewage all in the same place.” 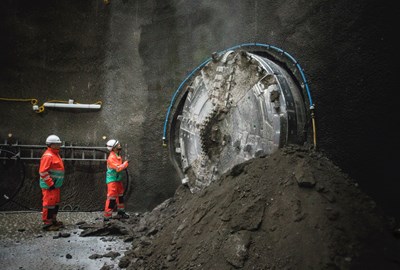 “The project is about building a system to catch those storm flows and take them to sewage works to be pumped out after the storms pass. It’s a big storm tank, in essence,” Lewis said.

“What we’re doing is building a tunnel that’s 25 kilometres long. It’s roughly just over 7.2 metres in diameter and can hold about 1.5 million cubic metres of fluid.”

Preparatory work on the project began in 2015 and construction is now underway at 24 sites in London. The project is anticipated to be completed in 2025.

“From an engineering point of view, some interesting stuff we’re finding is actually how well the Victorians did. Breaking into the brickwork, we’re actually breaking into the existing sewers that were built in the 1860s, and it’s still as good as new,” Lewis said.

“We’re actually building under the River Thames because of the flows out into the river. In order to build our system, in a lot of places we’ve had to create new lands. We’re building cofferdams into the river, creating new land, and then sinking a shaft down to connect to our main tunnel.”

The main tunnel starts at 35 metres deep and runs to 60 metres.

Challenges of working under a city

Lewis said one of the most interesting aspects of the project is its location in central London.

“For example, one of our sites is right opposite the London Eye, so we’re working at a lot of iconic places. Another site is right outside the M16 building, which you’ll see often in James Bond movies. That makes life challenging for us,” he said. 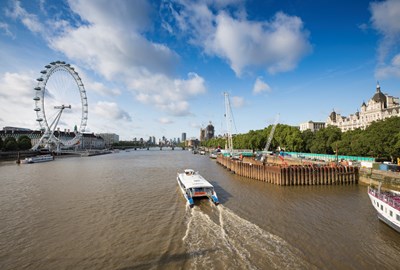 The major engineering challenge they’ve faced is the range of ground conditions.

“At the shallow end, we start the tunnel in London close, then we get into sands and gravels which are a lot more challenging,” Lewis said. “Some of the flint beds we’ve been through have been very hard on our tunnel boring machines. Then we finish off running through chalk.”

Project management is another huge task that has thrown up a lot of unique problems.

“We elected to use the river to get on and off sites,” Lewis said. “We’ve brought a lot of our spoil and our materials up and down. It’s helped us in terms of our carbon footprint, and reduces the amount of lorry movements.”

Tideway has moved 5 million tonnes on the river, with each barge taking about 50 truckloads. Lewis estimates that’s the equivalent of roughly 550,000 truckloads saved.

“We’ve brought tire cranes and site cabins up the river, and even set them up from the river — things you might not expect to be transported by water,” he said.

“We learned from some of the other projects like Crossrail, as well as Thames Water’s project before ours on the lead tunnel and how to tunnel through chalk and how they lined it,” Lewis said. 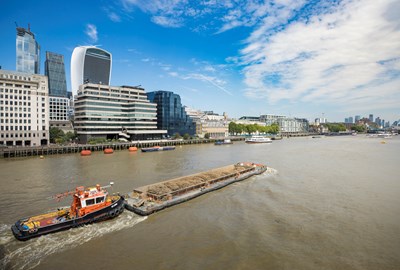 The engineers also looked to global projects for examples of best practice when it comes to designing a modern sewer system.

“Our commission manager worked on the Portland, Oregon project, so we share in lessons that he learned from commissioning and bringing that into service. We regularly have conversations with people working on deep tunnels in Singapore,” Lewis said.

“Globally, many people exchange information. The tunnelling community is quite small — one of our managers is now working on the Cross River Rail in Australia.”

The project has created more than 4000 jobs of at least 26 weeks employment, with 1 in 43 full-time employees apprentices. Staff working on the project have also volunteered over 13,000 hours to Tideway’s STEM program, which encourages young people to take up careers in science, technology, engineering and mathematics.

Lewis said the team was hoping to find some interesting archaeological discoveries, but there has been little so far. However, there have been a few surprises.

“At one of our sites, Chambers Wharf, which is by Tower Bridge, we came across a skeleton and they were wearing thigh-length leather boots. It might have been someone of quite high status in those times, but it’s probably someone who was working in the river and they were using them as waders,” he said.

At another site, a team discovered that old boats had been sunk down to make a jetty, as well as an intact oak barrel from Scandinavia with 1830 printed on the side.

“One day, doing river dredging work, we dredged up a bomb. I’ve never seen something that looked like a bomb, but when we saw it, we knew what it was,” Lewis said.

“We had to call in the bomb squad, and as Sod’s Law would have it, that was four o’clock on a Friday afternoon, so they had to shut down Westminster Bridge and the tube station, and it was chaos.”

How 5 industry applications deal with drainage

How 5 industry applications deal with drainage