This new standard of steel culverts will last a century

by Roundel
in Advertorial
2 min read
0

At Rio Tinto’s Koodaideri mine project in the Pilbara, a local company is providing a new standard of steel culverts that promise to stand the test of time.

Construction on the $2.6 billion mine began last year, with the first production expected to begin by the end of 2021.

The mine will have a capacity of 43 million tonnes per year, but before any iron ore can be extracted from the ground, the mining and metals company needed to put the right infrastructure in place and connect Koodaideri to its existing rail network.

Enter Roundel, which secured the on-site culvert supply for the Koodaideri rail project. In recent years, the team at Roundel has developed a protective coating system for steel culverts, which substantially improves the abrasion resistance and lifespan performance of the products.

Known as high performance laminate, or HPL, the product is a heavy duty, polyethylene-coated galvanised steel that has been tested to provide a 100-year lifespan.

“It’s a thicker coating — twice that of standard PE coatings — and much stronger in terms of overall longevity.”

Inspiration for the coating came from the desire to solve a common problem, Byard said. 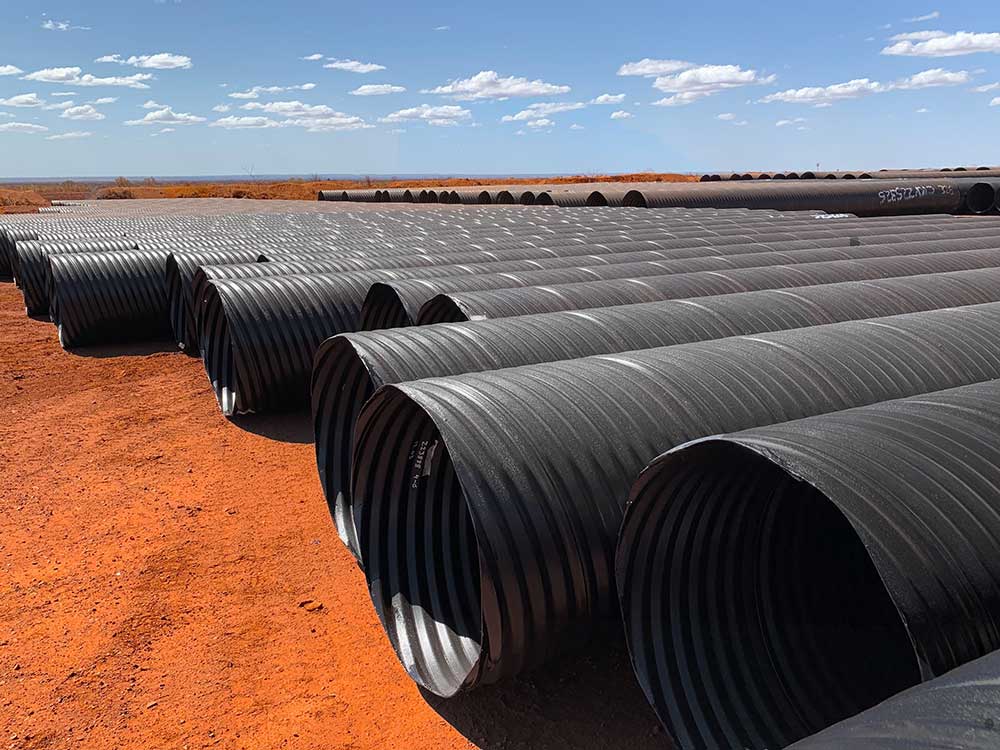 “We were looking to achieve greater durability and tested a number of PE coatings,” he said.

“HPL is by far the best we have come across. The reinforced PE layer provides considerable additional protection to the underlying Z600 galvanising, resulting in a substantially increased lifespan of the culverts, even in the most aggressive conditions.”

As part of the Koodaideri rail project, Roundel has manufactured 4,500 t of HPL PE-coated culverts on-site, and Byard said Rio Tinto’s adoption of the product was testament to its superiority.

“We’ve made probably one of the only significant changes to the product in the last 50 years,” he said.

“The significance of us persuading Rio Tinto to use this product is very high. They wouldn’t have taken it on unless it was really high quality and met their requirements.”

The reinforced polymer provides high resistance harsh environmental conditions and surface damage — making it suitable for projects in the Pilbara. And when tested against another commercially available PE coating, Roundel’s HPL was found to wear at less than half the rate of the other pipe.

“It’s quite a game changer, as we can offer 100-year life in most conditions, which is the same lifespan required for concrete pipes,” Byard said.

“As such, we believe we can offer our HPL culverts as a direct alternative to concrete, at a lower installed cost.”