A new lifting technology could make it easier to install wind turbine blades and other heavy loads in blustery weather.

The blades are asymmetrical so that the wind can catch them and cause them to rotate in the air. There’s a risk of damage to the crane, the blade or both.

“[The blade is] designed to catch the wind, and it’s designed to be installed where it’s windy,” he said.

“When you put those two things together, installation can be difficult and potentially unsafe. Even without the wind load, the actual rotational inertia you’ve got to overcome is quite large. So, it’s quite a big challenge.”

Canceling out the wind

Thomson, the founder and Chief Technical Officer of lifting equipment company Verton, is developing a new technology he hopes will make it easier and safer to install wind turbine blades. Known as the Windmaster, it builds on Verton’s existing technology, which claims to be the world’s first remote-controlled load-management system.

The original equipment used gyroscopes to precisely rotate and hold suspended loads, eliminating the need for people holding ropes, or “taglines”, on the ground.

But when Thomson started to look at wind turbine blades, he quickly realised the basic gyroscopic system alone was not going to cut it.

“As soon as we started to do some simulations and some design calculations, we realised that existing technology wasn’t going to be enough to really give you a reasonable degree of control,” he said.

“The other concern we had was, if you lose communication during the lift, how do you control the load while lowering it to the ground? Because you don’t want a blade up in the air that might spin around, which could impact the crane.”

“IT’S DESIGNED TO CATCH THE WIND, AND IT’S DESIGNED TO BE INSTALLED WHERE IT’S WINDY. WHEN YOU PUT THOSE TWO THINGS TOGETHER, INSTALLATION CAN BE DIFFICULT AND POTENTIALLY UNSAFE.”
Stanley Thomson FIEAust CPEng

Thomson said they added adjustable wind vanes to the Windmaster to negate the impact of the wind.

“You can drive them remotely,” he said. “By making one create more resistance, and making the other one less resistant, you can pretty much balance out the effect of the wind on the blade.”

A key part of the Windmaster technology is the control system. This is because there are two inputs driving the orientation of the load — gyroscopes and wind vanes.

“They both need to be controlled … and they’ve got quite different operating characteristics,” Thomson said.

“It has to happen in real time and it has to happen automatically, because you couldn’t expect someone on the ground to be pushing the remote control and actually have it work fast enough and hold the position.”

Thomson said the control system is currently being created by software developers at Verton, Queensland University of Technology, the University of Newcastle and the Innovative Manufacturing Cooperative Research Centre.

“We’ve done quite a bit of computer simulations but there’s no substitute for the real thing,” he said.

The idea for Verton’s original load-orientation technology came while Thomson was working for a large contractor on industrial projects, such as water treatment and coal processing plants.

Thomson said the company had a very strong safety culture, which included a policy that anyone who walked under a crane load was sacked on the spot.

“We did that quite a bit — it was probably the most common reason for someone to leave a project early,” he said.

“I always felt that it was a little bit unfair, and it was a very blunt instrument in terms of the education process because they weren’t there to show that they’d learnt their lesson.”

Thomson wanted to find a way to mechanise the process instead. “There’s got to be a better way than having people working all day potentially at risk of losing their job or injury,” he said.

“So we built a prototype of it — a proof-of-concept test rig — that will enable us to simulate actual wind and then the responses of the different parts of the system.”

“BY MAKING ONE CREATE MORE RESISTANCE, AND MAKING THE OTHER ONE LESS RESISTANT, YOU CAN PRETTY MUCH BALANCE OUT THE EFFECT OF THE WIND ON THE BLADE.”
Stanley Thomson FIEAust CPEng

Thomson founded Verton in 2014, developed the concept for the gyroscopic machinery and started the patent process. In 2019, Verton was accepted into PortXL, a three-month accelerator program in Rotterdam.

One of the criteria for joining the accelerator was industry engagement. The company attracted the attention of Danish wind turbine manufacturer Vestas, marine contractor Van Oord and heavy-lifting specialist Mammoet, which partnered with Verton to develop a safer lifting method for installing offshore wind turbine blades.

In 2020, Verton and Vestas signed a partnership to develop specialised handling tools for wind turbine installation.

Civil and structural engineer Jonathan Votier CPEng, a lifting and rigging specialist in oil and gas, recently used Verton’s technology to replace an engine in a gas compression facility. 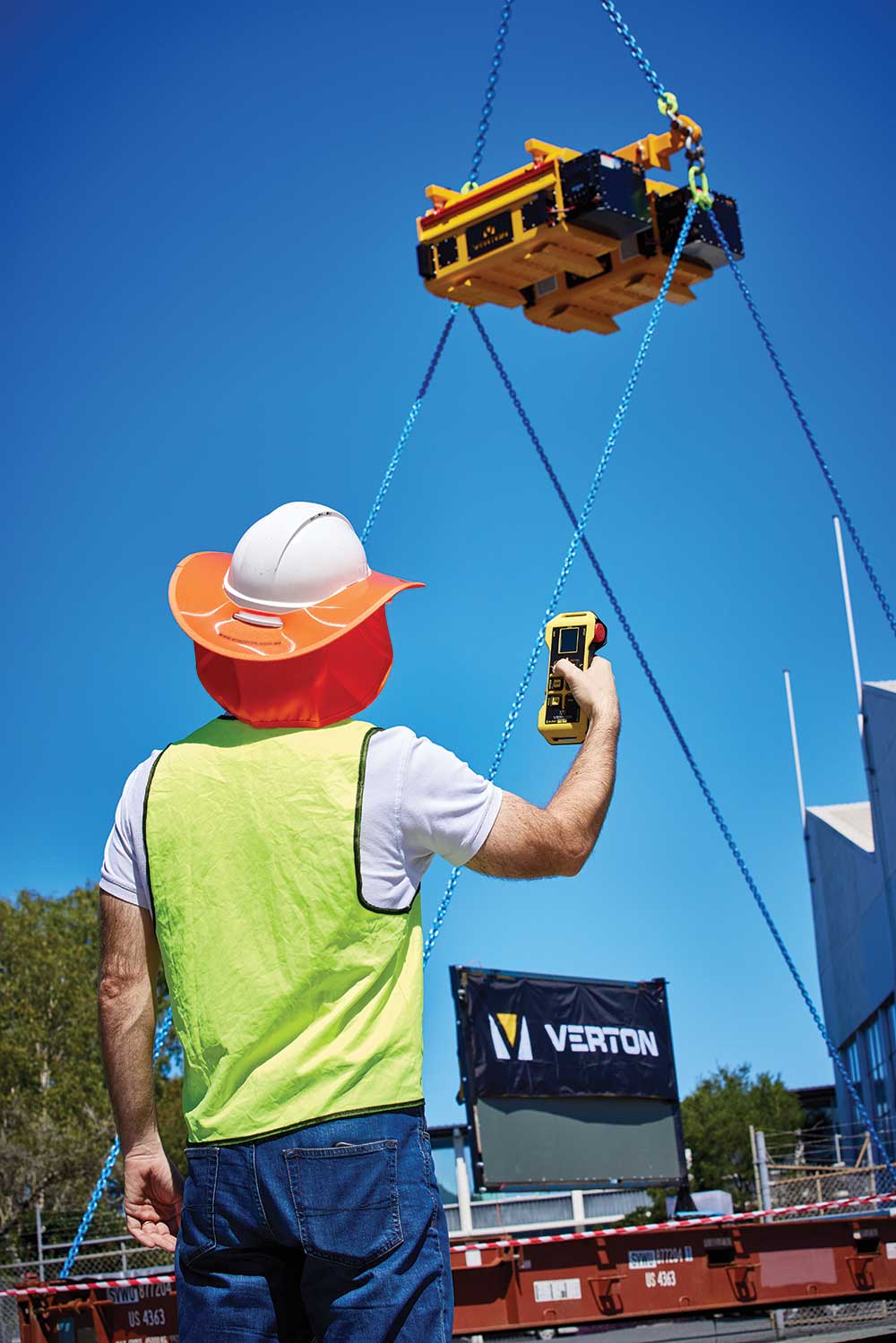 He said the engine had to be lifted and rotated 90 degrees so it could be removed through a slot in the roof. The process was then repeated in reverse to put the engine back in.

Votier said the technology allowed the team to lift the 11 to 12 t engine about nine metres through the roof with great control.

“We were able to — without any taglines — orientate the load through the roof, turn it 90 degrees to its final position and then sit it down,” he said.

Votier said conventional taglines can be used when a load only needs to be lifted a couple of metres into the air.

But being able to control the load becomes really beneficial for higher lifts.

“It really comes into its own when you have to start lifting four, five, six metres plus in the air,” he said.

“Particularly in our case with the engine, particularly in the case of wind turbines, where it’s just not practical. It’s almost impossible to control the load from traditional methods of the taglines.”

Ultimately, Thomson sees a market for the Windmaster in oil and gas as well as wind energy. He plans to test the technology onshore in Australia before expanding to offshore and international projects.

“Once you go offshore the wind speeds can be a lot higher,” Thomson said.

“We still will be able to control the load because as the wind speeds get higher, our wind vanes have a stronger reaction.”