Repositioning vulnerable patients has always been a difficult and stressful procedure for all involved, especially when healthcare workers are operating alone. This team’s new invention hopes to solve that problem.

Fergus Davidson, Maireid Carrigg and Maneet Singh, students at Melbourne’s RMIT University, created the AirLift device in response to a brief that asked entrants to design something that solved a problem – be that a frustration we all face in daily life, or a global issue.

“A couple of us come from healthcare backgrounds, and when we came into the design studio at RMIT, all of us wanted to design something for the healthcare industry,” Carrigg says.

“We’d seen what was happening in Australian healthcare, and we also have personal histories with family members who would have benefited from this kind of device,” she continues.

“A spike in demand for at-home care, alongside an under-resourced and rapidly ageing workforce is making community healthcare work increasingly dangerous,” adds Davidson.

A burst of inspiration

Early prototypes for their solution looked very different from the final product.

“We had a couple of iterations, starting from a robotic arm that would lift patients up,” Singh says. “And we also considered foam wedges that could be compressed and decompressed to achieve a similar result.”

The inspiration for the final idea, though, came from an unexpected source.

“The design came to us during a camping trip when inflating a dry bag,” says Davidson. “Realising the potential, we modified an inflatable lounge so that it could comfortably reposition a human, which served as our initial proof of concept.”

The new design is clearly more affordable and practical than a robotic arm, adds Singh.

“During the camping trip we realised that we were over-complicating the idea and we should stick to pneumatics,” he says. “We started sketching and doing design sprints, and we landed on the design for our lift. From there it was just fine tuning the design to what you see now.”

Sketches on paper formed a lot of the early design process.

“We used the Crazy 8 design sprint method at first,” says Singh, “where we would rapidly generate ideas. Then we landed on the concept that we liked, and took that to the CAD tools.”

“We were lucky enough to be doing a lot of this work in collaboration with WorkSafe Victoria, and we were getting feedback from them as the project progressed,” he says. 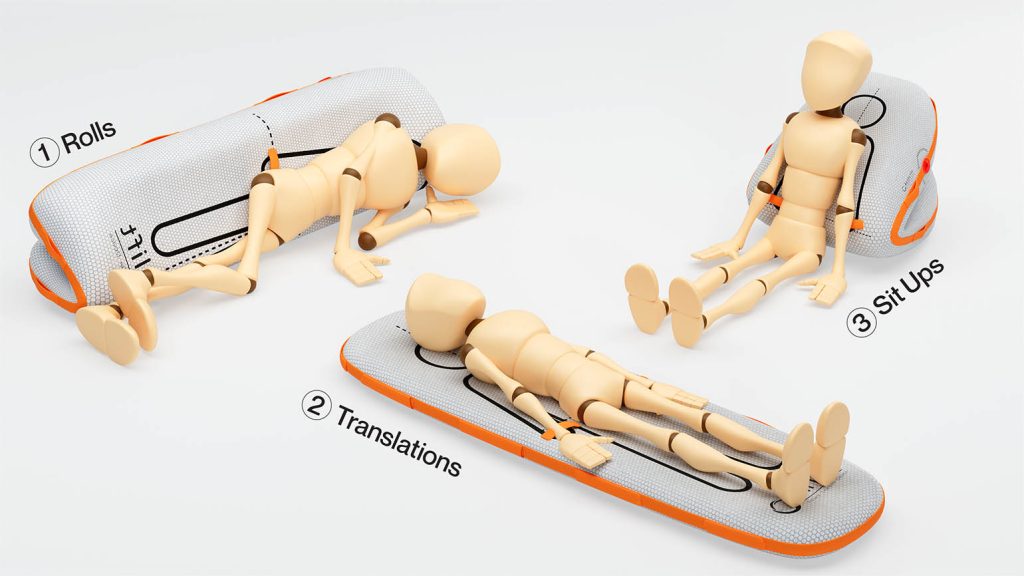 The AirLift device is designed to be safely used by a single healthcare worker to perform three key patient movements. Existing tools that aid the same repositioning tasks can be bulky, expensive, or require more than one person to operate.

Carrigg describes how moving the patient using the AirLift relies on positioning and inflation of the bladder in specific ways to achieve each kind of movement.

“We envisioned that the three forms – sitting up, rolling over and translating patients in the bed – could be done by manipulating the slide sheet before the worker inserts it underneath the patient,” she explains.

“The slide sheet has markings indicating the fold lines for each kind of movement,” she continues. “Then, once it’s been placed under the patient in the appropriate place, the healthcare worker inflates the device using the handheld pump.”

As part of their prize from the James Dyson Awards, the team has received $9000 in funding to take their idea to the next stage of its development. For the team, that means manufacturing a fully functional prototype, as well as assessing and improving the sustainability of the design.

“A priority was ensuring that the device is reusable,” Davidson says.

For example, the device has a removable, washable cover to allow practitioners to maintain the hygiene standards required by their roles.

“Ideally we’ll use as many recycled and reclaimed materials as possible,” continues Davidson. “But there are very strict requirements in place because this is a medical device.”

“Because we’re dealing with an inflatable device,” says Singh, “the materials need to be very strong and flexible.”

“The removable cover will be made from a silicon-coated polyester,” he continues, “which itself is super durable. And it’s well suited to this use case because of its high elastic limit.”

Singh goes on to explain that the inner bladder would be made from thermoplastic polyurethane (TPU), a material commonly used for pneumatic bladders, again because of its elasticity, but also the fact that it is transparent.

The pump and handheld control device will be made from recycled polypropylene, he says.

“We’re excited to start prototyping,” says Davidson, “because it will just present more problems and more chances to solve them.”

You can read more about the team’s submission, and the James Dyson Award, here. As national winners, the team’s entry is eligible to be named in the Dyson engineers’ shortlist for the international prize.

For more of the latest engineering news sign up to create’s weekly newsletter.

How mega events can be catalysts for change

Rowan is the Digital Editor for create. He is excited to share the stories of great engineers with the world. In his spare time he's either exploring virtual worlds from the comfort of his couch, or the real world with his family.

How mega events can be catalysts for change