Eight new stations deliver commuters from the north-west to the infrastructure.

When the Sydney Metro Northwest rail link opened in 2019, great swaths of the city’s suburbs were connected to a train link for the first time.

A substantial, multi-year project, the connection required more than trains and tracks. Its construction and operation affected entire communities, reshaping the way people across many parts of Sydney were able to move around.

That is why an integral part of the system has been the eight new stations along the length of the line, which delivered commuters from north-western Sydney to the infrastructure. The consortium responsible for delivering these, a joint venture between Mott MacDonald, SMEC and KBR, has been recognised for its work with a 2020 Australian Engineering Excellence Award.

The award was announced in September, and the project is now being considered for the nationwide Sir William Hudson Award, which will be presented at the Pinnacles Awards Ceremony on 9 November.

“There are lots of awards one can win, but this is one of the ones which is very important,” said Mike Barron, Project Director for Sydney Metro Northwest at Mott McDonald.

“I was really, really happy about it. It’s an immensely important award because it’s so important in the engineering environment in Australia.”

Mott McDonald’s role, along with its partners, was to implement the design of the stations, as well as train stabling and maintenance facilities and 15 km of twin tunnels. The project as a whole delivered 36 km of new metro rail, five upgraded stations, and 4000 commuter car parking spaces. 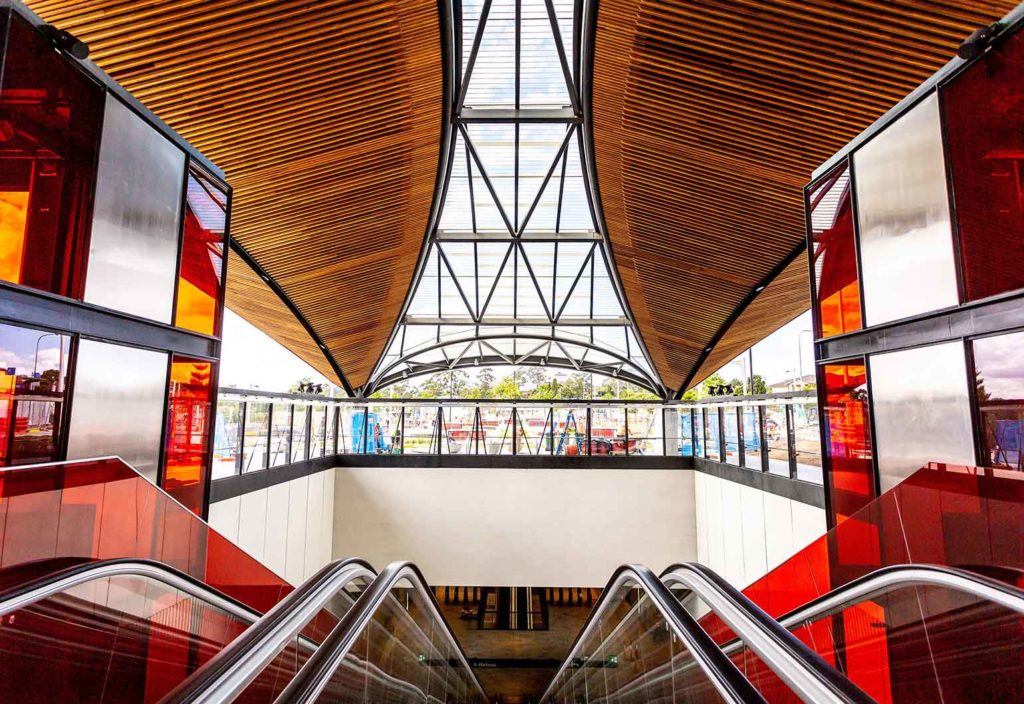 Barron said that it was important to see the project as a holistic one that took commuters from door to door, rather than “here’s a station, people are expected to turn up and the journey is just from the station to the next station”.

“The area of north-west Sydney has one of the highest car uses in all of Australia,” he told create.

“It’s a significant intervention to put in a major mass transit link and then to repurpose the bus routes around it, to make sure it serviced both the Sydney Metro and to ensure that you provide the things like kiss-and-ride [parking] and areas within each station precinct and to provide bicycle routes as well.”

Implementing all of this required taking concerted measures to reduce the disruption to the community while construction was under way.

“We spent time trying to minimise the impacts that we would create, minimise our environmental impacts,” Barron said.

“Maintain as much of the existing flora and fauna areas as possible, make sure that we weren’t going to discharge water into sensitive areas and such.”

He believes that effort paid off, if the response from local residents who visited the project’s public open days as it approached completion was anything to go by.

“They were incredibly impressed by what was being delivered,” Barron said.

“They saw it, even then when it wasn’t operational, as being a step change and having made it worthwhile that they’d suffered inconvenience for a while.”

When considering the success of the project, Barron pointed to the good working relationship he had within the consortium, as well as with other contributors.

“We wanted to maintain as much of the existing flora and fauna areas as possible, and ensure we weren't going to discharge water into sensitive areas.”
Mike Barron

“We worked extremely well with the architects, Hassell, and it was a pleasure working with them,” he said.

“Engineers and architects are known for having some disagreements, but actually they’ve got some wonderful people there. And I still work with them now and I’m still enjoying working with them, so I think it’s really great.”

One example of this successful partnership came with the design of the station canopies, which, in their original conception, would have been quite heavy.

“They thought that they could make it work really well with some sort of space frame,” Barron said.

“We worked with them, we said, ‘Well, that’s still quite heavy. We can come up with a better idea, a better way of giving you what you’re looking for’.”

The engineers turned to 3D-printed models to reconceive the structure.

“There was a lot of work in terms of analysis and trying to tweak everything to refine it, and we ended up with a really, really light steel structure for the size,” Barron said.

“One which I think the architects will say meets their original vision for what they wanted to do, but at the same time has saved the contractor quite a bit of money on what the original steel weight was.”

It’s an example of the sort of positive contribution that people with different areas of expertise can bring to a project.

“They produced some wonderful designs that were great for us to apply our engineering knowledge to,” Barron said.

Don’t forget to tune in to the Pinnacles Awards Ceremony on 9 November to find out who will take home the Sir William Hudson Award.