The contradiction at the heart of sustainable engineering

a veil of rain from a storm

Geotechnical engineers like Bridges are at the forefront of efforts to meet Australia’s COP26 commitments and adapt to a changing climate. But the path to green isn’t always black and white.

On one hand, the technical director of ground and underground engineering at Aurecon is seeing a push to design for greater resilience in embankments. That’s aimed at protecting transport infrastructure from a changing climate, particularly flooding.

On the other hand, that resilience demands bigger, heavier structures. That means more materials, more cost and more carbon.

“With my sustainability hat, I want to be using less material, less carbon,” Bridges says. “And then with my resilience hat, I’m trying to protect the infrastructure for the next 100 years. So, at the moment in the industry, we have this contradiction.

“It’s really a struggle now to make sure that we really understand the weather and can predict how that will change the inner workings of an embankment.”
Dr Chris Bridges FIEAust

“Everything’s so much heavier, a lot more concrete, a lot more protection work, just to get the resilience,” he says. “But that counteracts our sustainability requirements.”

It’s led Bridges to consider radical solutions to reduce the amount of material needed. While he’s yet to prove it will work or examine the cost benefits, Bridges is exploring ideas such as hollow embankments.

“To reduce the amount of fill, we could make them hollow by putting pipes longitudinally through the embankment rather than crossing it,” he says. “More sacrificial material on the slope face will protect the core.

“But it’s really a struggle now to make sure that we really understand the weather and can predict how that will change the inner workings of an embankment.”

Groundwater is typically well below subgrade and generally not an issue.

Rainfall and flooding are two sources of water that can impact the subgrade and need to be managed. 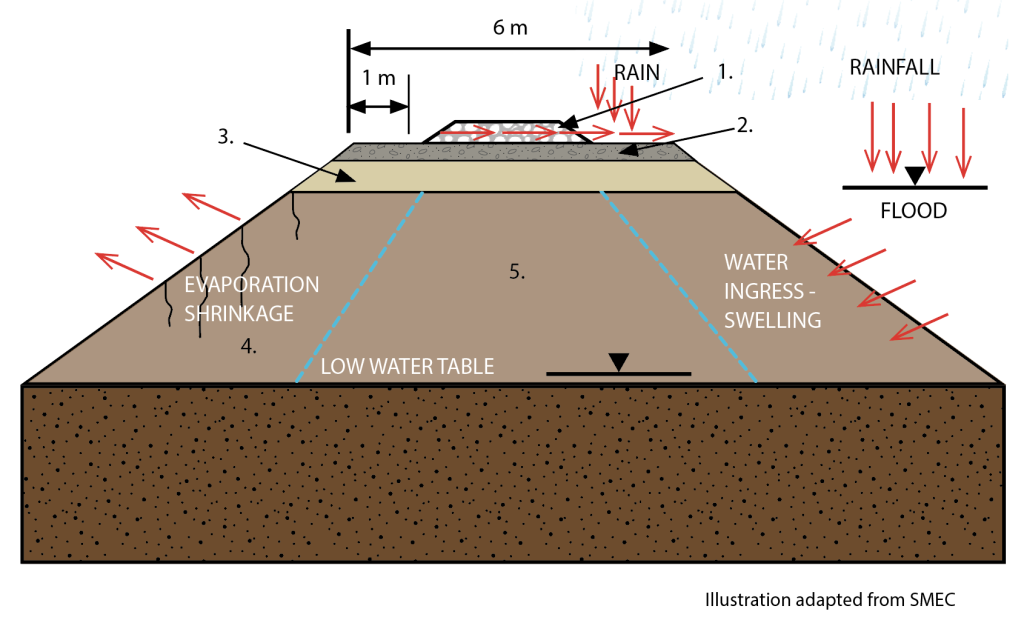 Looking forward, not back

Bridges is concerned that government infrastructure specifications, standards and codes are based on the weather patterns of the last 50 years.

“All our specifications are based on the past, not really on what we anticipate is going to happen in the future. So there is a bit of thinking we need to do as an industry.”

While a lot of resilience work looks at extreme flood levels, Bridges fears we’re missing other issues. He points to changing rainfall patterns as something that could damage the infrastructure in a way we’ve not thought through.

“But look at the weather now in Queensland — it’s our dry season and it hasn’t stopped raining,” he says.

Embankments, for example, get wet and then dry out before it rains again, Bridges says.

“If we’re going to have longer wetter periods, then the water will reach further in and damage our core,” he says. “And that will mean that what our design was based on may no longer be relevant.”

Bridges is currently researching the impact of climate changes on soils. He believes we first need to define the problems we’re facing. “Only then can we understand what we need to design for,” he says.

“We need to step back and look a bit broader at what the impacts are. A lot of the work is really around flood level, either river or sea. But this extreme wet-drying is probably going to have a bigger impact.”

This year’s Climate Smart Engineering conference will shine a light on projects that have industry leading sustainability credentials and can highlight the ways in which the engineering profession can better manage the complex challenges of achieving net zero emissions as soon as is practicable.

Register today for the CSE conference

The Australian engineers behind the Ford T6 platform