While some of the world’s most influential people have their sights set on exploring space, one ambitious startup says we still have much to discover right here on Earth.

Oceans make up 71 per cent of the world’s surface, yet only one fifth of them have been mapped.

Terradepth, a startup based in Austin, Texas, has designed a 9-metre autonomous submarine that will explore the world’s oceans and capture data that’s never before been available.

Judson Kauffman, Terradepth co-founder and co-CEO, along with fellow former Navy SEAL Joe Wolfel, told create that their mission was inspired by the excitement of the unknown.

“The ocean represents 98.5 per cent of all liveable space on our planet and we have no idea what’s going down there,” he said.

“There are sensors on buoys, coastal sensors and ships and submarines that bring back data, but this is only a tiny fraction of areas that represent the ocean.”

Kauffman added that there’s a wide range of use cases for the submarine, named Abraham.

“We’ll be looking at things such as water chemistry, sediment profile, current profile and the strength of the currents on a daily basis,” he said.

“Over 90 per cent of international communication goes through subsea cables, not through satellites, so the demand for more subsea cables is going up, and there’s a need to maintain the existing cables. We’ll also be looking at organisms, and even things like shipwrecks.”

“For example, if it sees a shipwreck or a downed aircraft, it will know because we’re putting that level of processing on the robot through edge computing. Furthermore, the machine can make inferences and make decisions based upon that data,” he said.

In the case where Abraham is looking for a downed aircraft, they could pre-program it to come to the surface immediately — meaning the submersible establishes a GPS connection and can turn on additional sensors and cameras — if it discovers something that appears to be a piece of a fuselage.

“The second thing that sets us apart is our ability to recharge batteries autonomously at sea. No one’s ever been able to develop an autonomous energy recharge for submarines until now,” Kauffman said.

Terradepth did its first successful tests on the recharge in a simulated environment last month.

“The way that works is we have an air breathing generator that runs off of diesel fuel. The system will know when its batteries are low, and it will say, ‘it’s time to go to the surface so we can breathe air.’ On the surface, it puts a snorkel out of the water and starts to breathe air. Once it can do that, it turns on that generator, because it has to have air going through it to operate. That generator recharges the batteries,” he said.

“Everyone else has to use a ship’s crane, get their hands on the robot, bring it onto their ship and then do a manual battery swap. We don’t have to do that. Removing the requirement to have this huge surface ship dramatically reduces our carbon footprint and dramatically reduces the daily costs to operate our systems to get the same data.”

Kauffman added that the firm has a patent for a hydrogen fuel cell to get away from fossil fuels, but presently it relies on the energy density of diesel. The issue of energy capacity is also what he believes sets Abraham apart from other models.

“We have a lot of energy and a lot of power capacity, which means we can put a lot of sensors on board the robot and do a single pass of an area with maybe 10 sensors turned on,” he said.

“Those sensors are also modular. So if a new sensor comes out that we think is more important, more valuable, or just better performing, we can swap them out pretty easily.”

The submarine also has a ‘twin’ operating on the surface, which maintains a satellite communication and connection with humans monitoring the vehicle.

“They operate with acoustic communication, and when the twin runs low on batteries, they switch locations,” he said. 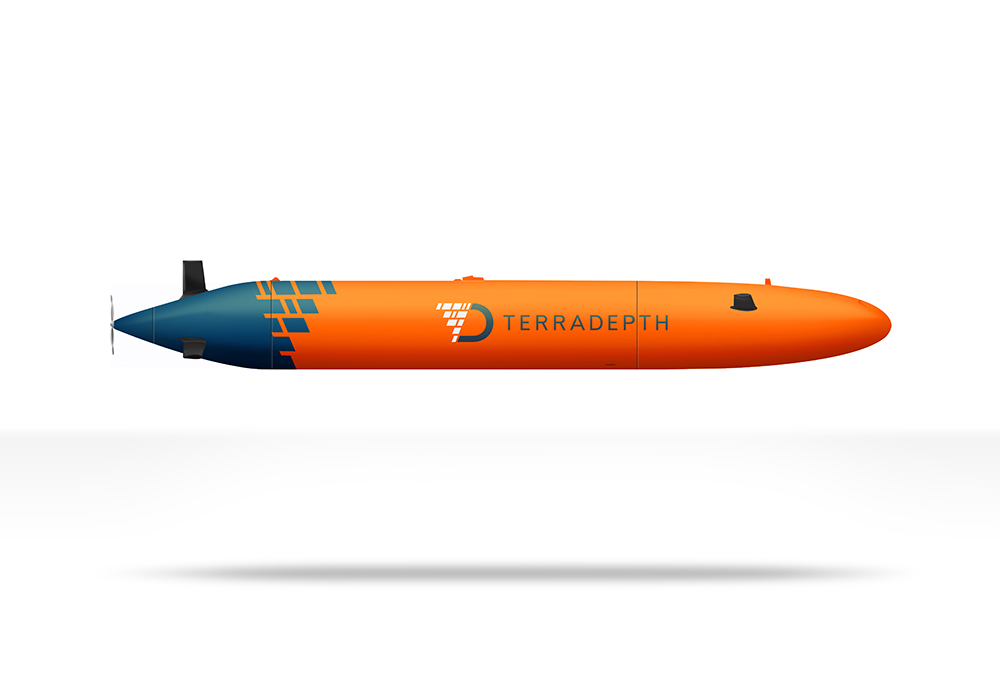 As a startup, Kauffman said they will need to begin commercial operations before being able to send out submarines without contracts. While money might still be an object, he believes that there’s little scientifically that will get in the way.

“We can go to full ocean depth, which is 6000 metres. If you can go that far, you can get to 98 per cent of the entire ocean. There’s no temperature restrictions, and no problem operating in complete darkness,” he said.

Terradepth also has an in-house AI and machine learning division, which will process the raw data collected by the submarines.

“Most companies are taking sonar data and converting it to a JPEG, and then they do their training on that image. But you lose a lot of resolution and richness in that sonar data when you convert it down to a JPEG,” Kauffman said.

“We started from scratch, and are doing a lot of machine learning on raw sonar data, which means that we get a much fuller picture of what’s happening. When we put that into our visualisation tool, you have what looks like a virtual ocean that was created by a video game company, not by a subsea mapping company.”

Kauffman said that next year, Terradepth will begin commercial operations focused on offshore wind companies. But they’re not the only people trying to unlock the mysteries of the deep sea.

“The oceans cover a significant part of our planet, and yet we know more about the surface of the moon than we do the depths of our oceans,” she said.

“Our ocean floors also contain plate boundaries, faults in the Earth’s crust, and other features which may cause natural hazards such as tsunami. Mapping them helps us understand the risk they may present, and helps us shape our response to that risk, increasing our resilience to natural hazards.”

In practical terms, Martin noted that mapping our oceans, particularly around the shallow continental margins, assists with navigation for both surface and subsurface vessels, and provides important information needed for coastal and offshore development.

“Australia has the third-largest maritime Exclusive Economic Zone in the world so it’s really important that we manage it well,” she said.

Under the United Nations Convention on the Law of the Sea, boundaries are defined by features on the seafloor.

“We also have a lot of natural resources in our marine domain, our fisheries for example, and we know that certain species of fish prefer particular habitats. Through mapping we can understand where those habitats are, and therefore better understand how to sustainably manage our resources,” she said.

CSIRO operates the Marine National Facility, which includes the ocean Research Vessel (RV) Investigator, on behalf of the nation. RV Investigator has several advanced vessel-mounted sonar systems that are used to map the seafloor, at any depth, wherever the vessel is around Australia.

“These data are used by researchers within CSIRO and other institutions for a whole range of scientific purposes, to better understand our marine environment,” Martin said.

“CSIRO is very active in using a variety of marine data, including seafloor mapping data, to help us solve the greatest challenges in managing our marine environment and resources.”