The CSIRO’s Dr Kimberley Clayfield is at the forefront of an exciting new era in space for Australia.

The past two years have been outstanding for Australian space enthusiasts.

Last year in July, the long-awaited Australian Space Agency (ASA) officially began its work. In April, the $245 million SmartSat Cooperative Research Centre was announced. Startups Fleet and Myriota have made it into orbit and money is making its way into new businesses.

“One of the key changes in the Australian space sector, particularly in the last five years, has been the explosion of private investment in small commercial space startup companies,” explains Dr Kimberley Clayfield, Leader of the CSIRO Space Technology Future Science Platform.

Her multi-hat-wearing professional life takes in “space strategy, program management and technology development, industry development, and the implementation of new space-related activities and capabilities” at the organisation.

Within Australia’s community of professionals with their eyes on the sky, Clayfield said the CSIRO has a vision to “become a technical and operational lead for Australia’s space activities, in support of the Space Agency’s goals”.

The ASA will bring Australia to the international table, help coordinate the country’s ecosystem, and tell the world it is serious.

Its targets are ambitious, and include an aim to help “triple Australia’s space economy to $12 billion and create up to 20,000 jobs by 2030”, as attendees heard at the agency’s launch.

“That has created a huge amount of enthusiasm and focus on Australia from the rest of the globe,” Dr Peter Moar, Entrepreneur in Residence and Senior Lecturer at La Trobe University, told create.

“There’s a lot of interest and investment in projects, and there’s also been venture capital that’s coming into the country at an amazing rate.”

CSIRO’s space engineering history is long and proud. It includes the organisation’s role in receiving footage — via the Parkes Telescope — of the first moonwalk in 1969 and developing the technology — via black hole research — now known as WiFi.

“This enables excellent launch capabilities with low risks. We need to build on core technology and create a sovereign launch and satellite manufacturing capability to be internationally renowned,” he told create.

“This would provide us with end-to-end space services, and downstream services can then easily follow due to a low barrier to entry in the market.”

And, for the first time ever, Australia is set to operate an Earth observation satellite over which it has tasking control.

Making the most of the opportunities will require policy coordination and strategy — two long-standing areas of fascination for Clayfield, a mechanical engineer by training.

“In a way I actually see policy development — this might sound a bit weird — as not that dissimilar from engineering, in that they are both problem-solving activities that require some creativity,” she said.

“In the space domain, having technical as well as some policy understanding, I think, is really advantageous.”

While individual technologies are fascinating, Clayfield was always interested in “the bigger picture”.

This was intensified when she attended the Space Generation Summit at the World Space Congress in 2002, an opportunity to learn about how national and international policy settings informed space activity strategies.

“I realised how vital it is to understand policy, the way it’s developed, influenced and decided,” she said.

“The technology alone is not enough to successfully motivate such large undertakings and build strong industries.”

After deciding this was where her future would be, Clayfield completed the International Space University’s (ISU) Space Studies Program, majoring in Space Policy and Law, at the same time as she was finishing her PhD in engineering. An Executive MBA at ISU followed in 2011 and 2012.

In 2005 she landed a role as Assistant Manager, Space Policy, at the Federal Department of Industry. During this time, she co-authored a policy proposal to Cabinet that led to the four-year Australian Space Research Program in 2009.

In 2008 she began the second of two “dream jobs” at CSIRO, where she remains.

“Until recently, I’d had the same position title since I joined CSIRO, but the actual content of my role is always changing, so I get to see a lot of different things, work on a lot of different projects — different disciplines, areas of space application — so it’s always exciting,” Clayfield said.

“No two days are the same. It’s been terrific, very easy to maintain my enthusiasm over that time — and where else could I combine national space policy and technical space program management?”

Clayfield has earned numerous awards during her time at CSIRO, including a place in the 2010 Australia’s Most Inspiring Young Engineers list, the inaugural International Astronautical Federation Young Space Leader award in 2013, and the American Institute of Aeronautics and Astronautics Lawrence Sperry Award in 2014.

She was the first Australian to win the Lawrence Sperry Award. Previous winners include former NASA Flight Director and Apollo 13 hero Gene Kranz.

“To have your name on a list with Gene Kranz is pretty surreal and quite overwhelming really,” Clayfield said.

“It’s a great honour to have had my work recognised that way.”

Clayfield also spent 15 years as volunteer Program Director of the South Australian Space School. She co-authored a 2017 longitudinal study on participants over 20 years of the program, which aims to focus Year 10 and Year 11 students on STEMM (science, technology, engineering, maths and medicine) careers.

“Not many of them actually ended up working directly in a space field — which is not surprising because the space industry in Australia is not huge anyway — certainly not for the 20 years before now — but quite a significant number of them did go into STEMM-related study or professional field,” Clayfield said.

“Almost all of them said, ‘Well no matter what I did, I still really love science and STEMM’.”

In recent years, the CSIRO has sharpened its focus on work with industrial impact, and this is the case with space.

One of these addresses challenges around creating 3D-printed and cast CubeSat parts for space out of low thermal expansion alloys. This seeks to overcome problems caused by the huge thermal gradients on small structures travelling in space.

The growing market for specialty nanosatellites represents an area where Australia could provide solutions for a global market. Such projects build the ability to provide such solutions.

“Space engineering is probably the highest art of engineering, in terms of you’re putting a device into a hazardous environment that you can’t just easily grab again and bring into the workshop. It has to work,” explains Moar, who led La Trobe’s team in its collaboration with the German Aerospace Center (DLR) on DESIS (DLR Earth Sensing Image Spectrometer). 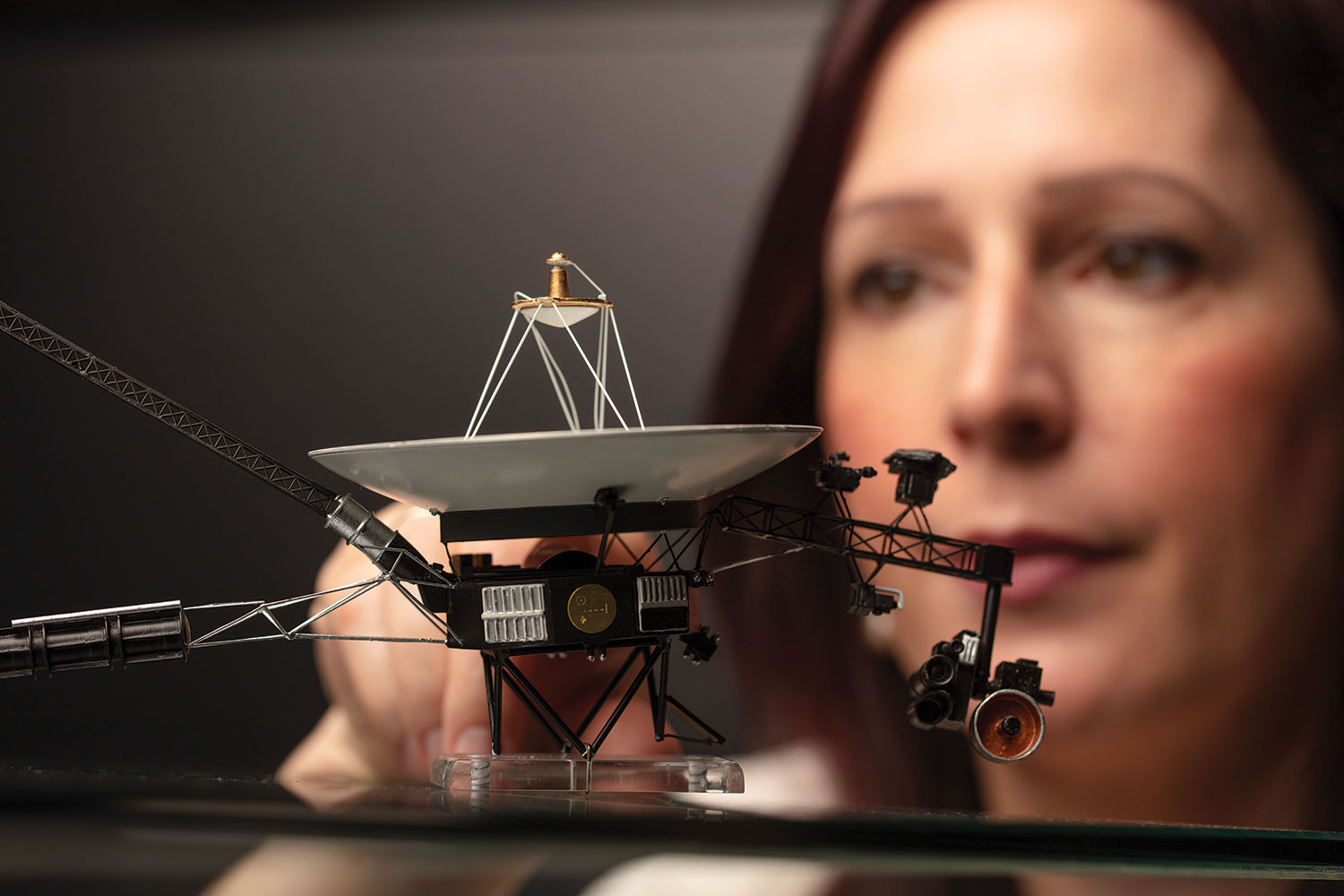 Another area where the country, assisted by CSIRO, could increase its industrial strength is in Earth observation (EO).

According to Earth Observation Australia, EO economic output is worth more than $5 billion a year in Australia. Australia has acknowledged world-class capabilities in data analytics and applications development but it has never owned and operated its own EO satellites.

Clayfield’s organisation is aiming to change that. It has invested $10.45 million in acquiring a 10 per cent share of “tasking and acquisition” for Surrey Satellite Technologies’ NovaSAR-1.

This complements the development of the Australian owned and operated CSIROSat-1 (CSIRO Scientific InfraRed Observing Satellite) CubeSat, which features Australian SME Inovor Technologies as a collaborator on design and build.

This would be a much-needed shift from the country’s dependence on other nation’s space-based infrastructure for Earth observation, said some experts.

“That small portion of [NovaSAR-1’s] orbital duty cycle doesn’t sound like very much, but it does mean that we can say, ‘Okay, we’re going to use our 10 per cent of that’,” Roger Franzen, Earthspace Consultant and Technical Advisor, Shoal Engineering, told create.

“From the point of view of actually gaining experience and being able to look at where we want, exactly when we want, rather than with the usual delay, means that we can produce more responsive products … It’s not the whole package but it is a very good starting point.”

The CSIROSat-1 project began in 2018 and the aim is to have the satellite launched within two years. Clayfield, who is overseeing its acquisition, said it’s an opportunity to learn more about designing a unique satellite system, particularly the sensing and onboard data processing systems.

“It’s a very good capability development and testing opportunity for us,” she added.

CSIRO’s role in this exciting new era for Australian space includes leading international technical engagement research and development such as the new CubeSat project and collaborations with start-ups and SMEs to seize industrial opportunities.

Asked where she hopes the country can progress to over the next decade, Clayfield said this:

“If we have a look at what small Australian companies are doing at the moment and have achieved in a very short time — in particular companies like Fleet and Myriota — I would expect that we can have some very strong commercial companies that are operating internationally in 10 years’ time, which are world competitive in their areas and are supported by a domestic integrated space supply chain.

Franzen has a deep background in space projects, including positions as CEO of Auspace and Square Kilometre Array International Dish Consortium Leader.

He said the current moment is the first significant shift in the 35 years he’s been pushing for “space to occur in Australia”.

In order to make the most of it, the input of engineers will be fundamental, as will a commitment to building assets in-country.

“If those engineering steps are not mandated in the procurement of sovereign assets, then you can let yourself actually acquire something that is sub-standard,” he said.

He added that it also needs to become “routinely acceptable” that Australia builds its own space assets rather than import everything it needs.

“If you want the children to aspire to do something, you need to inspire them to aspire. You need to have an industry that’s doing real things,” Franzen said.

This article originally appeared as “The bigger picture” in the June 2019 issue of create magazine.

LGBTSTEM Day: How the engineering profession can raise the bar on LGBTQ+ inclusion

LGBTSTEM Day: How the engineering profession can raise the bar on LGBTQ+ inclusion