The Kalbarri Skywalks allow visitors to venture out over Murchison River Gorge. (Image: Department of Biodiversity, Conservation and Attractions)

An engineer behind Western Australia’s Kalbarri Skywalks says he’s proud to have opened up this wilderness area to the world.

Created from cantilevered steel, which extends over the edge of the Murchison River Gorge in Kalbarri National Park, the Kalbarri Skywalks allow visitors to wander 17 metres and 25 metres beyond the gorge edge.

After winning the 2020 Australian Engineering Excellence Award for the Skywalks, Engineers Australia member Andrew Jens, a structural engineer at lead project firm Terpkos Engineering, reflected on what being involved in the construction means to him.

“The Kalbarri region experienced a major tourism decline between 2002 and 2012,” he says.

“The Kalbarri Skywalks have now become a major state and national tourism attraction bringing many visitors to the Kalbarri National Park and the region.

“This has been a boost to the local economy and the significant increase in revenue from the park visitations has gone on to form part of the funding used by the Department of Biodiversity, Conservation and Attractions for the management, conservation, and protection of Western Australia’s 31 million hectares of national parks and other reserves.”

Jens says he has visited the Skywalks several times since opening.

“Each time it has been great to see families and kids get a thrill from walking out over the gorge edge and enjoying the views of the 80-kilometre gorge,” he said.

“As an engineer I’m proud that we have helped create a safe structure which the public can directly engage with and get great enjoyment from.” 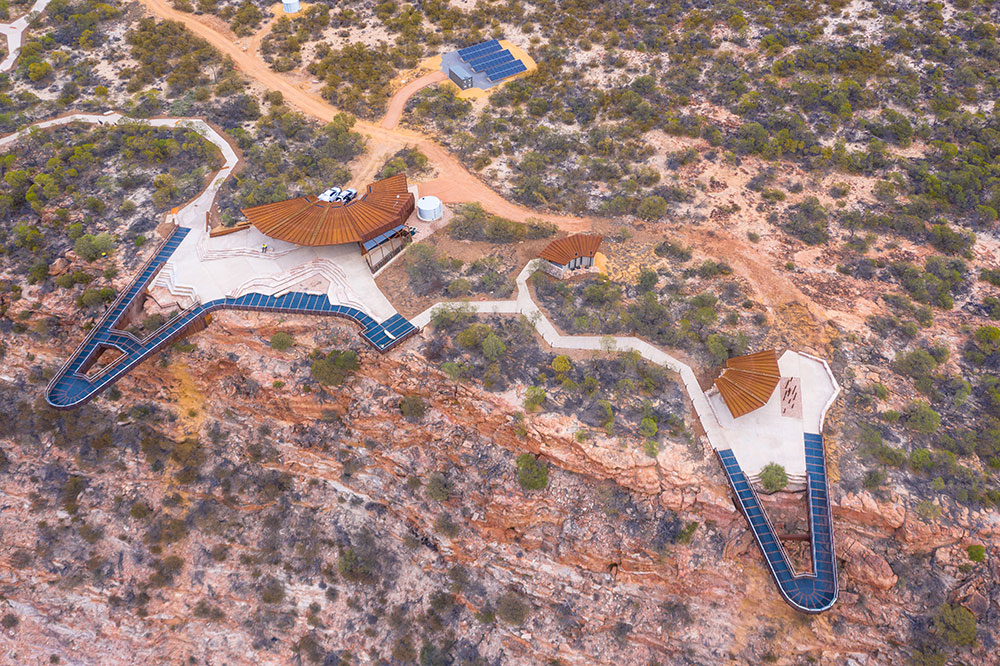 “Rock anchors were used at the rear concrete beam footings to restrain the footing from uplift, the rock anchors extend 10 metres below the underside of footings.”

Jens adds that the skywalks were pre-assembled in a workshop to ensure the boxes fitted and could be connected with ease.

“We had a strong focus on utilising local contractors where possible for the works to maximise the benefit to the local community,” he said.

“Approximately 40 per cent of the Skywalk budget went to builders within the Midwest region.”

The landscaping around the Skywalk was put together to display the history and culture of the Nanda People, employing local Nanda artists and providing an opportunity for visitors to engage with the history of the region.

The engineers also had to ensure the walkway was fully accessible, which presented a new set of challenges.

“It was agreed that the beams would be installed below ground to ensure a gentle grade from the natural ground onto the skywalk decks,” Jens says.

“This required considerable excavation of the gorge rock. The excavated rock was stockpiled at a nearby site and then re-used to form the considerable stonework landscaping, which has become a project feature in itself.”

Finally, Jens and his team had to model the dynamic behaviour of the structure, so the public felt comfortable standing at the tip of the walkway without vibration from crowd movement.

“After some modifications to the box spine beams to maximise the natural frequency, the maximum acceleration was found to comply with AS 5100 Bridge Structures for the critical footfall frequency,” he said.

“The public response we have received has been very positive.”

Jens says that being involved in the construction of such a significant landmark was a career highlight.

“Structures of this scale and magnitude are intended to last a very long time and require a lot of planning to establish the applicable design criteria and preferred construction methodology while considering the project constraints,” he said.

“The Kalbarri Skywalks were constructed into the rock at the top of the Murchison Gorge with many site constraints which impacted the design and construction such as varying rock competence, high winds, safety issues, to name a few.

“We are proud as engineers to have worked with the design team and the builder (Bocol Constructions) using a collaborative approach to develop safe and sustainable solutions to the project challenges to produce a long lasting and low maintenance structure for the client.”

This article was originally published in February 2021 and updated in July 2022 with new perspectives from the engineers involved.

Surgical robots could chart the path to better patient outcomes

Surgical robots could chart the path to better patient outcomes