An ex-Ford engineer has developed Australia’s first electric motorbike, which will begin production in Melbourne next year.

Savic Motorcycles founder Dennis Savic said it’s been “a whirlwind ride” since create first interviewed him about his big idea in 2019. Since then, he has successfully completed a $1.83 million dollar capital raise and has grown his team to more than 30 automotive engineers, software developers, artificial intelligence (AI) specialists and marketers.

“So far, we’ve received 90 orders for our three-model C-Series, which ranges from the torquey 25-kilowatt Omega — comparable to a 300cc traditional motorbike — to the 40 kW Delta, and the 60 kw Alpha, roughly equivalent to a 1000cc bike,” he said.

Savic aims to have at least 20 electric motorbikes delivered to their owners in the last quarter of 2022, before scaling up manufacturing in 2023.

“We’re very proud of our production prototype, which boasts a number of world-class, racing-quality components, including Wilbers suspension, Brembo brakes and a customised Optibelt carbon fibre drive belt,” he said.

“Our ingenious engineers are currently developing a sophisticated AI system and riders’ app, and will soon embark on the design of a customised anti-lock braking system with Bosch Australia.”

The bikes have the torque of a small European hatchback, and impressive charging and speed capabilities. 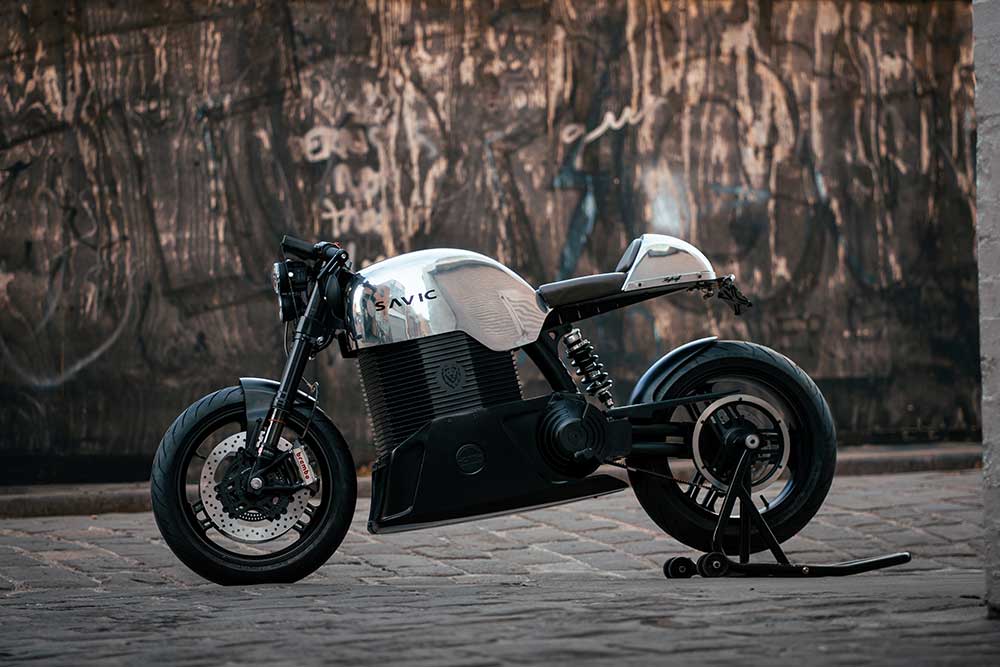 “The C-Series’ 16 kWh lithium-ion battery can be charged to 80 per cent in under four hours and will deliver a city range of between 150 km (for the Omega) and 250 km (for the Alpha),” Savic said.

The design showcases the large lithium battery wrapped in cooling fins, with the belt-driving motor nearly hidden away and disappearing into the single-sided swingarm.

The Good Design Awards jury stated that they “love the retro-tech styling of this e-bike … Combining the exciting looks of a café racer with zero emissions and low running and maintenance costs has real appeal.”

Looking under the hood

The model ran simulations to discover how the bike’s weight, shape, power, tyres and other factors would affect its speed and acceleration, in order to ensure the optimal motor specs and gearing ratios for its on-road performance.

Over the past year, Vinovrski has been looking after the design and wiring of the prototype’s electrical systems, developing the vehicle control logic, programming the motor controller and modelling parts of the 12V system.

He said one of the greatest challenges in developing the C-Series was ensuring that the designs ticked all the boxes across engineering, production, supply chain and economics.

“Designing a superior system or component, building an efficient supply chain and adhering to the economic requirements and price points of our product are all relatively straightforward in their own right,” he said. “But balancing all three and completing them in parallel requires meticulous planning and coordination.”

Savic follows a cyclical design process, with many iterations of the core components. Vinovrski said the team was able to balance the discrepancies between the ideal designs of the engineers and the realities of manufacturing and supply chains, especially during COVID.

“Another challenge was finding a suitable production strategy that would scale as the business grows,” he said.

“Parts needed to be designed [so] they’d be suitable to manufacture efficiently and affordably in small quantities, while ensuring they would not have to be significantly changed or redesigned when we are ready to scale. For example, from gravity casting to pressure casting techniques.”

The engineers also had to plan for the cost of tooling for a variety of manufacturing methods, while future proofing for new manufacturing techniques and capabilities.

“A final challenge is striking a balance between design, engineering and the compliance regulations we will have to pass,” Vinovrski said.

“A final challenge is striking a balance between design, engineering and the compliance regulations we will have to pass."
Adrian Vinovrski

“The team has put so much emphasis and effort into ensuring that our production vehicle is as close to the concept our designers and initial customers fell in love with. We have had to work hard to ensure that any deviations from the original concept are meaningful, progressive and balanced.

“In fact, I would say that the overarching theme when faced with the majority of our engineering challenges has always been balance.”

Vinovrski said that being a small, young team, many comments they’ve received regarding the design concern the differences between their vehicle and what people are used to seeing on high-volume products from large manufacturers.

“It seems to me that the premium details and material selections for a lot of the minor components have always been appreciated,” he said.

“The way we’ve designed the powertrain has been particularly engaging, because there are currently very few examples of electric powertrains being designed for a motorcycle from scratch.

“Our team is very proud of what we’ve been able to achieve so far. But having said that, this is just the very start of our electrifying journey.”

This award-winning engineer is unravelling the mysteries of the universe