Australian hospitals incinerate thousands of tonnes of potentially infectious medical waste every year — and COVID-19 has supercharged the problem. A new partnership is looking for a better solution.

It’s so much waste, said systems engineer Ryan Pike, that one Canberra dialysis centre was recently contacted by a patient’s neighbour who was sick of dialysis rubbish overflowing into their bin.

“It’s an astonishing amount that just gets thrown out,” he said. “The patients … they feel like it’s within their sphere of responsibility to not just throw this stuff away.”

Pike, the Chief Technology Officer for 180 Waste Group, is working with Newster Systems, Baxter Healthcare and a team of Australian National University (ANU) engineering students on a project to recycle this waste.

Pike said it’s the first time the technology has been used to process clinical waste in Australia.

It’s also the first time it’s been applied to waste from peritoneal dialysis, a technique that uses a patient’s abdomen as a membrane.

Pike said 5000 t of peritoneal dialysis waste is produced each year in Australia.

“Essentially our solution is, instead of the waste going into the yellow and red bin, it would go through our machine,” he said.

“It would be processed [and] reduced down into this granulated format.”

After the waste has been treated, a float tank is used to separate the denser HDPE residue.

“That in itself is a commodity … it’s a very high-quality plastic,” Pike said. “When you can source separate it like that, you can do several things with it.”

The team has successfully used both PVC and HDPE residues to replace sand aggregate in concrete cylinders. They have also made plastic sheets from the residues with a heat press, and are looking at liquid injection moulding to turn the granules into products like plastic chairs and tables.

“INSTEAD OF THE WASTE GOING INTO THE YELLOW AND RED BIN, IT WOULD GO THROUGH OUR MACHINE.”
Ryan Pike

Waste on the rise

Medical waste is notoriously difficult to quantify, with many clinics not reporting the amount of waste they produce.

Conservative estimates from 180 Waste Group put the amount of clinical waste produced by Australian public and private hospitals at more than 42,000 t a year. That excludes waste from clinics such as dialysis and veterinary centres.

Pike said one private company he looked at collected more than 500,000 kg of medical waste a year from Australian pathology clinics alone.

“A hospital in Queensland does about 600,000 kilos a year,” he said. “It’s absolutely ridiculous. And all these waste companies are simply transportation companies.”

The problem has been supercharged by COVID-19. A study of five hospitals in Iran found the pandemic had doubled the amount of waste produced, while in Victoria, some aged care homes produced 100 times more clinical waste than usual while managing outbreaks in 2020.

“Clearly, in the medical industry, people’s lives are at stake,” said Olivia Flower, an ANU engineering and physics student working on the project. “And it’s worth creating a bit of plastic waste to make their lives happier and healthier.

“But … maybe there is a way to reuse this and create that circular economy where these single-use items can be given new life.

“We can already offset so much waste, and this is just such a little niche market,” he said.

“If we could potentially get all the medical industry’s waste, it would be an insane diversion [from] landfill. And the savings would be incredible.” 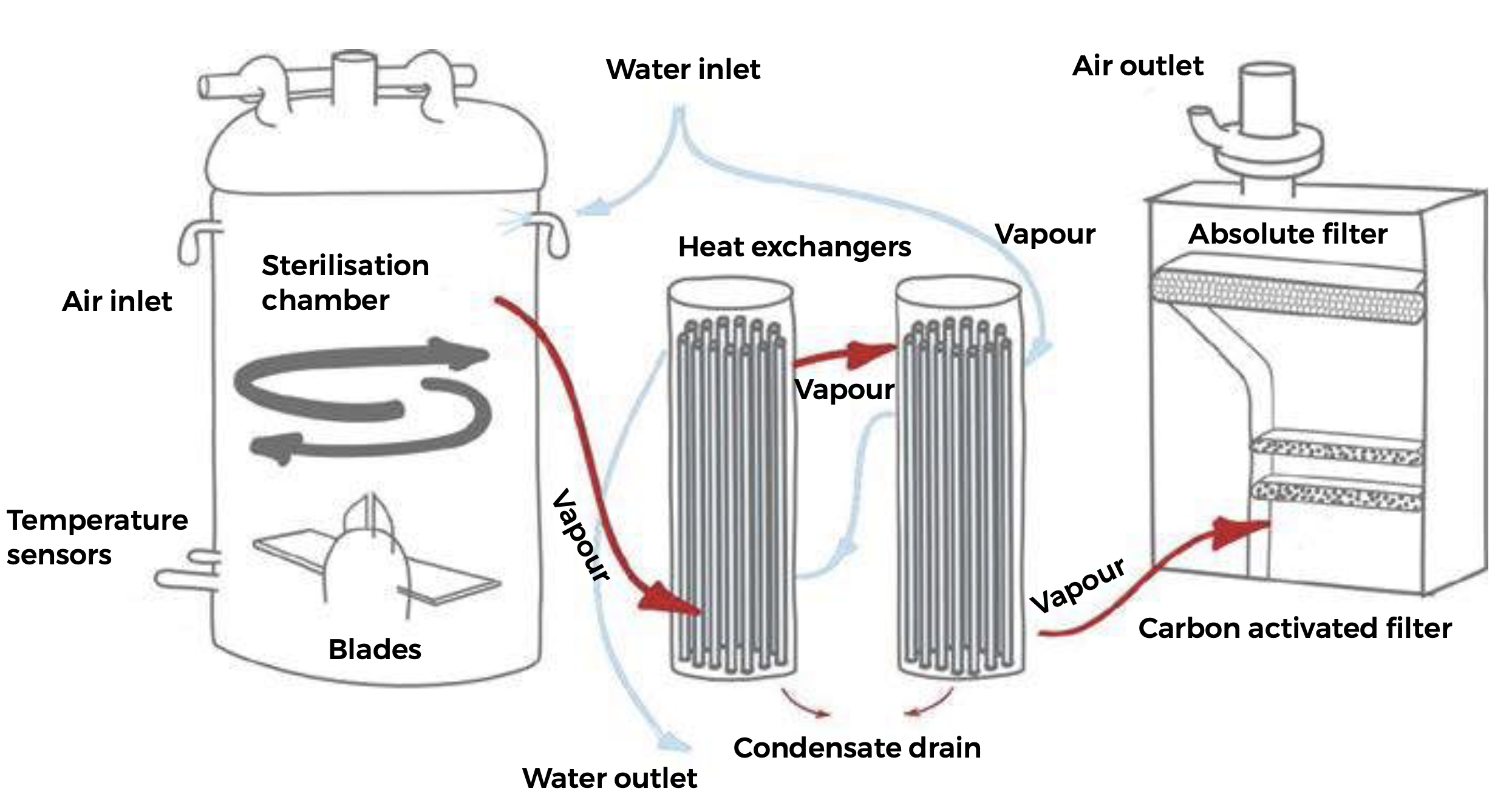 Before landing on dialysis waste, Pike and another ANU team tested frictional heat technology with sanitary products supplied by Asaleo Care. But the resulting plastic residue was very rough, and made porous concrete.

Pike then tried mixed health care waste, but the residue was too variable. He decided to constrain the material going into the machine to get a consistent output.

“That was the key,” Pike said. “The only way that we [could] bring in concrete manufacturers is by supplying them with a grade of product that stays the same.”

Another challenge was perfecting the steriliser’s settings. Flower said they initially treated the machine as a “black box”, where waste went in and residue came out ready to work with.

“But when we actually undertook the project, we realised that it was a lot more complicated than that,” she said. “There are a lot of parameters.”

Winkler did a training course on how to use the steriliser, and the team adjusted its timelines to trial different settings and inputs.

“We realised that we needed to adjust the composition of the input, as the waste was burning,” Flower said.

The team also found it was able to sterilise the waste at lower temperatures by extending the treatment time.

“IN THE MEDICAL INDUSTRY, PEOPLE’S LIVES ARE AT STAKE. BUT MAYBE THERE IS A WAY TO CREATE THAT CIRCULAR ECONOMY WHERE THESE SINGLE-USE ITEMS CAN BE GIVEN NEW LIFE.”
Olivia Flower

Pike said the machine itself is designed to process any type of medical waste — syringes, masks, even laparoscopic devices.

“Anything that can come out of a hospital or from a surgical setting [apart from cytotoxic waste] can go into these machines,” he said. “It’s just the residue and output … how can that be used?”

Pike now wants to test use of general healthcare waste in concrete aggregate. And while sanitary products didn’t work in concrete, the team was able to make sound attenuation sandwich panels from aged-care nappies.

In Canberra, 180 Waste Group is now planning a larger pilot of the dialysis waste systems. Ultimately, Pike hopes it will lead to a network of onsite frictional heat treatment machines at dialysis centres and hospitals all over Australia.

For Winkler, it’s been inspirational to turn unpleasant waste into new products.

“This can be done,” he said. “There are solution spaces for everything, really, if you’re willing to go that extra mile.”

Frictional heat treatment is a technology used to process potentially infectious clinical waste, without needing to incinerate it. It works like a huge blender, shredding waste and sterilising it using heat generated by both friction and the impact of the waste on the rotor blades.

To decontaminate it, the waste, is typically kept between 135°C and 150°C for several minutes. The heat from the friction is supplemented by resistance heaters that can adjust the temperature if required.

The resulting residue is unrecognisable: It is sterilised, finely ground, free of moisture, and noticeably smaller and lighter.

Frictional heat treatment is inexpensive and environmentally friendly. Vapours generated flow through heat exchangers, in which water is condensed, and then through activated carbon and HEPA filters before being released into the environment.

A Newster machine processes 180 Waste Group’s waste through a five-stage treatment cycle. The technology can be installed in a small room onsite at hospitals and can be run by an operator with basic skills after a two to four-day training course.

“IF WE COULD POTENTIALLY GET ALL THE MEDICAL INDUSTRY’S WASTE, IT WOULD BE AN INSANE DIVERSION FROM LANDFILL. AND THE SAVINGS WOULD BE INCREDIBLE.”
Jakob Winkler

Students Flower and Winkler worked with 180 Waste Group’s dialysis project for the capstone unit of their systems engineering degree. The program aims to give students authentic engineering experiences and prepare them for life after university.

The unit sees final-year engineering students work in teams of seven or eight on a project for a client. Other students tackled projects in the agriculture, medical, materials, mechanical and software industries.

Flower said it had been great to use her studies in the real world.

“This was a really amazing project because we were applying all these techniques we’ve learnt throughout our degree, but to a real project,” she said.

“We’re actually seeing results and seeing a client that’s happy with the work that we’ve done.”