Caravans travelling on dirt roads can kick up a lot of dust — which ends up inside the cabin.

A team of former auto-industry engineers created a deceptively simple solution to a problem that afflicts tens of thousands of Australian caravan owners.

While once largely content to stick to Highway One on their lap of the map, Australian caravanners are becoming ever more adventurous, and a growing number are exploring the unsealed back roads that criss-cross our wide brown land.

While their destinations might vary markedly, something almost every caravanner shares is the dread of cleaning the caravan interior after a stint on the gravel.

Nicolas Chevalier saw firsthand the impact of Australia’s notoriously fine dust on caravan interiors while working for the Australian arm of the Dometic Group, a Swedish caravan and specialist outdoor equipment supplier.

A former automotive industry engineer with a Master of Mechanical Engineering degree from INSA in Lyon, Chevalier had worked for Peugeot and Citroen in his native France, before immigrating to Australia.

The sight of caravan interiors coated in a thick layer of dust was common enough that, after he had joined Dometic, Chevalier soon began thinking about a solution.

He knew that powered dust extraction units were an established option, but also not widely used because of their cost and complexity. 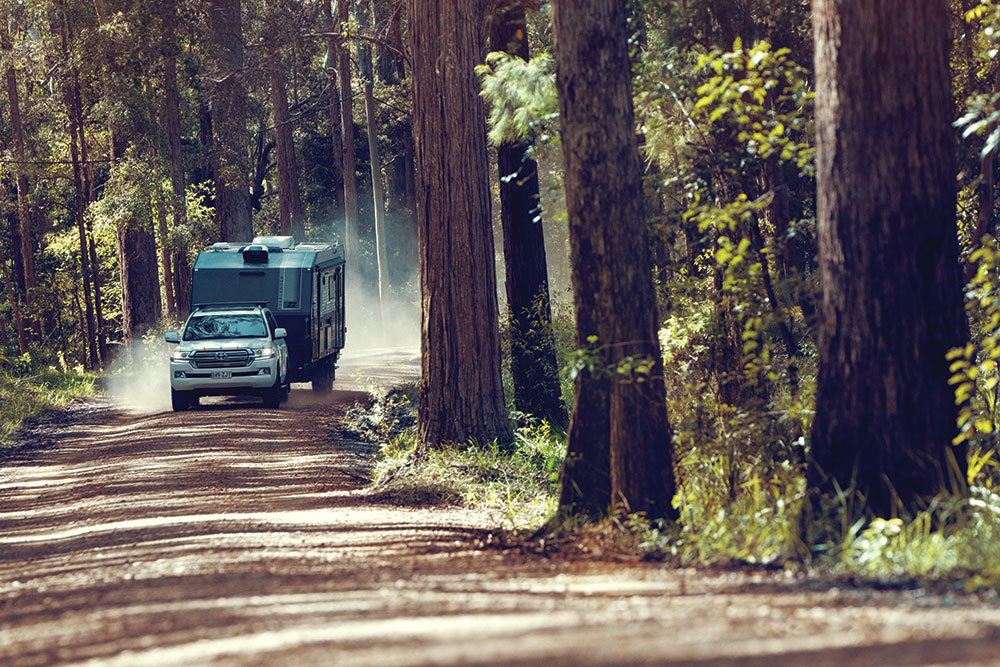 As Chevalier explains, these units can cost between $2400 and $6000, and they can be fairly bulky, weighing between six and 13 kg, with dimensions that take up valuable roof space that might otherwise be used for solar panels.

Other issues Chevalier identified with powered units include the fact they can be difficult to fit in an aftermarket situation, requiring 12 V electrical cabling to be brought into the caravan’s roof cavity. They also draw power, typically from a caravan’s “house battery” which affects battery lifecycle, and their high-current motors are at risk of failing on long trips. Forgetting to switch a powered dust extraction unit on before a trip is another reasonably common problem.

Chevalier knew that powered dust extraction units were an established option, but also not widely used because of their cost and complexity.

With this in mind, Chevalier began thinking of solutions. In 2015 he presented Dometic’s management with the initial design for a scupper-style dust-control vent, which set out to solve the issue of dust ingress inside a towed caravan.

As Chevalier explains, the negative pressure inside a caravan, caused by alternating high and low pressure around it, creates a vacuum that sucks air — and dust — into the vehicle through all apertures.

His research highlighted that traditional caravan scupper vents, while effective in reducing dust ingress in smaller sized RVs, do not prevent water ingress, or effectively block gravel, insects or other debris from entering the caravan.

Chevalier’s proposed solution called for the design of a roof-mounted pressure vent in which air pressure in the vent chamber would increase with vehicle speed, directing pressurised air into the cabin and increasing air pressure inside the van. The design had a screw-on fine-dust filter housed within the unit, and a series of holes to allow filtered air to pressurise the cabin.

Chevalier determined from the start that the solution had to be as simple as possible, meaning no power, a minimum number of components, and no moving parts. It also needed to be compatible with RV roof thicknesses from 25 to 60 mm, comply with free-flow ventilation requirement standards, resolve the water ingress problems of traditional scupper vents, and have a filter that could be safely removed or replaced from inside the RV.

Dometic saw enough in the initial proposal to commit funding and resources to the project, and Chevalier soon found himself working as a project manager alongside two other experienced auto industry engineers, David Bilston and Jason Svarc.

The team used analytical and time-saving techniques developed in their previous roles to optimise the design of the unit. This included advanced engineering tools like Design for Six Sigma, failure mode and effect analysis, computerised airflow simulation, and data acquisition.

Svarc was in charge of CAD design and advanced airflow simulation.

His early design work allowed fast prototyping and testing that sped up the process, while Bilston handled all project management aspects, as well as developing and building a custom-made data acquisition system.

“We needed that in order to develop the patented vent system that could operate in two distinct and opposite modes at different times without moving parts or user intervention. The system needed to act via pressurisation through a filter while driving, and via free ventilation that bypasses the filter when stationary,” Chevalier said.

“Jason used software to understand how airflow was working around the caravan and inside the dust vent. This meant that in a single week, multiple iterations of the product could be virtually tested without the need to go to physical testing. That in turn meant that we were able to select only the best performing solution to go to the next stage of physical testing.”

Finally, performance was validated in a series of exhaustive real-world tests, while towing a van on roads throughout Victoria, using PM10 particle sensors that measured dust levels in real time. The results showed a remarkable 97 per cent reduction in dust entering the van with the system in use.

“In a single week, multiple iterations of the product could be virtually tested without the need to go to physical testing.”
Nicolas Chevalier

The eventual product, the Dometic DRS, is claimed by the manufacturer to be the first affordable and effective non-powered solution for dust entry into caravans during transit. The unit has no moving parts and works with natural airflow.

It features a filter that is readily accessible from inside the caravan, takes up less roof space than powered options, and costs around $700 or below $1000 when fitted.

The product does exactly what Chevalier and his team set out to do: address the drawbacks of powered dust extraction systems. The product development journey is a wonderful example of how advanced design and engineering techniques can come together.

The Dometic team used 3D printing to allow fast production of working prototypes at reduced and full-scale, enabling early concept testing. Once that was completed, the project moved on to physical testing.

“Tests were performed either on a test rig in the office, or on a caravan in a dusty environment with a detailed test plan covering all possible aspect of real-life performance,” Chevalier said.

A key part of the project was the development in-house of a unique data acquisition system that allowed the team to assess and measure precisely the performance of different design iterations during physical testing so as to be able to prove what the system was doing at all times.

Ged Bulmer is one of Australia’s most experienced and respected motoring experts. Ged has edited some of the country’s leading publications, including Carsguide, Wheels, Motor, 4Wheeler and Overlander magazines, and also worked as a freelance journalist and media consultant. A well-cared-for 1978 Mercedes-Benz 280CE coupe holds pride of place in the garage of his Melbourne home, which he shares with his wife Lisa, daughters Scarlett-Rose and Isabella, and a pampered pooch named Bailey.