How one engineer found her dream job creating timber buildings

Growing national interest in engineered timber buildings is welcome news to those who have been advocating for the material, like engineer Lisa Thom.

Lisa Thom has a passion for engineered timber buildings. It began as part of her thesis at university. That then led to a job at Lendlease, where she has worked on a number of projects including International House at Barangaroo in Sydney and 25 King Street at the RNA Showgrounds in Brisbane.

In the past few years, she said engineered timber has started popping up everywhere, making it an exciting area of engineering to be working in.

“It’s environmentally sustainable, as it is one of the few renewable building products we have,” Thom said.

She also pointed to research conducted by the environmental not-for-profit Planet Ark, which found living and working within a timber building has positive physiological effects on people.

“It’s that impact that is the biggest benefit,” she said, “and also the biggest selling point for why more and more people are looking to work with wood.”

Thom said she got interested in the design of houses at a young age, playing games like The Sims. She pored over photos and floor plans in the real estate section of the paper. When she visited other people’s houses or even drove past them, she would think about how the different elements worked together.

“As I’ve grown up that’s developed more into a passion for how spaces impact people and led me to study architecture at UNSW,” she said.

“However, after 18 months I found that I missed the maths and science that I had loved in school, so transferred into civil engineering with architecture and never looked back.”

In the past couple of years, she worked part-time for Lindsay Dynan Consulting Engineers. Going into her final year, she asked them if there was a practical thesis topic she could undertake.

“I wanted to do something that would actually have an impact on industry,” Thom said.

“My manager at the time had been recently approached by a friend at Lendlease about the potential for timber commercial office buildings and whether Lindsay Dynan would be in a position to do the structural design. At the time, we didn’t know anything, so my boss suggested engineering timber as a topic.”

She found that cross laminated timber (CLT) had been around since the 1970s in Europe and became popular in the 2000s in North America, but had failed to take off in Australia.

“My thesis outlined recommendations on how to design CLT structures for the Australian Standards and further explored the various manufacturing, logistical and durability considerations that impact a timber project,” she said.

“To get all of the benefits of an engineered timber building, you need to consider the entire building, not just the structure itself.”

Thom said during her research, she received a lot of valuable information from Scandinavian timber manufacturer Stora Enso, a CLT producer. By way of thanks, she shared her thesis with the company, who then passed it on to Lendlease, who were on the lookout for timber engineers.

“An out of the blue phone call led to a coffee and a new job working with the DesignMake team at Lendlease,” she said.

“Working with a few specialists from the UK, I began concept designing a variety of timber structures, investigating and defining the way to design timber as we went.”

In late 2012, just as Thom was getting ready to start work on her thesis, Lendlease completed Forte, a 10-storey apartment project in Melbourne’s Docklands.

It was Australia’s first CLT building and, at the time, the world’s tallest timber apartment building. Later, and just down the road, they built Library at the Dock, also using CLT.

“Given the great industry response to Forte and Library at the Dock, lots of Lendlease projects were interested in whether their building could work in timber,” she said, explaining her good luck in getting to work on timber buildings as soon as she started at Lendlease.

“Some projects were just concept designs, some led into more detailed designs. Not only was I working on the technical engineering side, I was learning about cost planning, details with architects and how to build these structures with the construction team.”

The novelty of the material created an atmosphere of excitement in her team, a bit like you might find in a tech start-up.

“My favourite parts were when we hadn’t designed something before, like a connection or a type of element, so the three engineers in my team would grab a whiteboard and chat about all the potential ideas that could work and decide on how to position our engineering view on it,” she said.

“We were constantly testing new ideas and pivoting to ensure we delivered structures that were economic, reliable and the best fit for the project.”

The first project she worked on which actually became a reality was International House at Barangaroo, an old Sydney dock area being redeveloped. International House is a seven-storey building made from CLT, glue laminated timber (glulam) and recycled hardwood timber. It was completed in early 2017.

“As one of the structural engineers, I spent time on the detailed design and worked closely with the construction team to decide how best to document the project for their team and the manufacturers on how to process the timber efficiently,” Thom said.

“In particular I spent time with the installers before starting on site to bring them on the journey – explaining the structure and asking for their help and insights into how we can make construction more efficient.”

She was so enthusiastic about the project, she says she spent most of her time on site during construction talking with the construction crew and gathering their feedback.

The lessons she learned fed straight into her next project, 25 King Street in Brisbane. Part of the redevelopment of the Brisbane Showgrounds site in Bowen Hills, 25 King Street will be even taller (10 storeys) than International House, making it the tallest engineered timber office building in the world as well as the largest by gross floor area.

“25 King Street was an exciting project as I led the concept design while on site with International House, transferring the lessons we had learnt directly,” Thom said.

“We were able to refine the structure further and make tweaks to areas that had been challenging on International House. This was a great opportunity to see real benefits to the cost plan, program and overall building.”

Jordan Springs is a new suburb being built near Penrith in western Sydney. Thom is particularly proud of its community centre as it was the first project she was able to lead from start to finish on her own.

To be opened in 2018, this community centre has CLT walls and roof and glulam beams to support the long spans over the community hall. 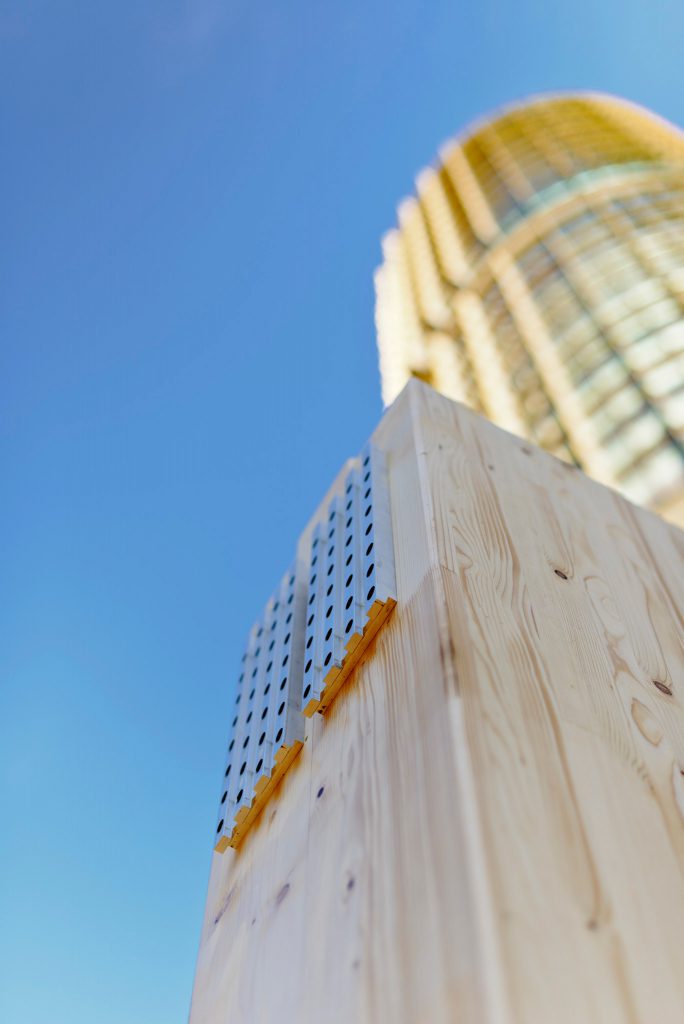 “The best thing about working on these projects has been to see how working on and with timber affects people,” she said.

“For some it’s how excited they get to be doing something new and innovative, thinking about things for the first time. For others it’s the opportunity to provide something that is making a difference in our community both from an environmental and a social perspective. And for some people it’s just working with timber.”

Because engineered timber is relatively new in Australia, she said the biggest challenge in her job is teaching people about it.

“When I start on a project I like to take some time with the project team to explain what engineered timber is, outline the typical issues like durability, strength and fire performance, and then encourage them to think about things with a new approach when designing with timber,” she said.

These conversations about engineered timber with people in the industry got her thinking that it would be a good idea if there was a university course that taught the basics. She approached her alma mater, UNSW, to start teaching timber engineering as a final year elective.

“I wanted students to learn about the structural design of lightweight timber as well as engineered timber to give them some background knowledge if (and when) they come across timber in their careers,” Thom said.

“I tried to make the course practical and covered first principles as well as the durability, manufacturing and construction considerations of using timber.”

Not only was this the first timber course at UNSW in a long time, they also decided to present it online, one of the first engineering courses to be done so at UNSW. This meant she also had to think about how best to make it work so it could be a prototype for delivering more online courses in the future. Overall, she feels it was a great experience.

“Being a lecturer is hard, but it is also incredibly rewarding to see students learn, ask questions that even you hadn’t thought of and see their passion for structural engineering and timber grow,” she said.

“We learnt a lot through the process, but we’ve also inspired the next generation of timber engineers.”

Melbourne Airport Rail Link: What stands in the way of the long-promised project?

Melbourne Airport Rail Link: What stands in the way of the long-promised project?