Minimising the impact of flooding on lives and assets using real-time insights is the aim of a venture co-founded by Chartered Engineers Australia member Juliette Murphy MIEAust CPEng.

A Deloitte study from 2017 showed natural disasters cost Australia $13.2 billion a year in economic damages. This is predicted to triple to $39.3 billion by 2050, even without considering climate change. Of this, flooding costs the economy $8.8 billion a year.

Flooding is also predicted to displace 50 million people by 2100, the CEO of FloodMapp told create.

FloodMapp’s AI-powered model is equipping government agencies, utilities, logistics companies and insurers in Australia and the United States with real-time flood inundation modelling that can achieve large scale, rapid modelling, as well as forecast inundation depth down to an individual street address.

It also landed Murphy a 2021 Women in AI award.

FloodMapp is connected to every river and rain gauge and digital elevation model across Australia. Parameters such as forecast and observed rainfall, river height at the target gauge and its upstream network, and physical river and catchment characteristics are fed into neural network machine learning models.

“These models are trained on as much flood event data as we have available in the observed record and deployed … on scalable cloud infrastructure, where they are automated to predict forecast and current river heights,” Murphy said.

“Subsequently, these heights are applied as boundary conditions to inform 2D rapid hydraulic models, which dynamically run and update as new data and forecasts come in.”

FloodMapp’s detailed, hyper-localised models give those in key industries, services and emergency response teams extra lead time, as well as provide rapid damage exposure calculations that can be communicated to shareholders, regulators or management.

“FloodMapp can provide mining operations with a picture of potential impact to their site before a flood happens.

“This allows them to take action to prevent damage to assets, minimise lost production and mitigate business interruption.

“This might involve relocating machinery and equipment to higher ground, bringing in more pumping infrastructure, or shipping more product before critical rail infrastructure is closed.” 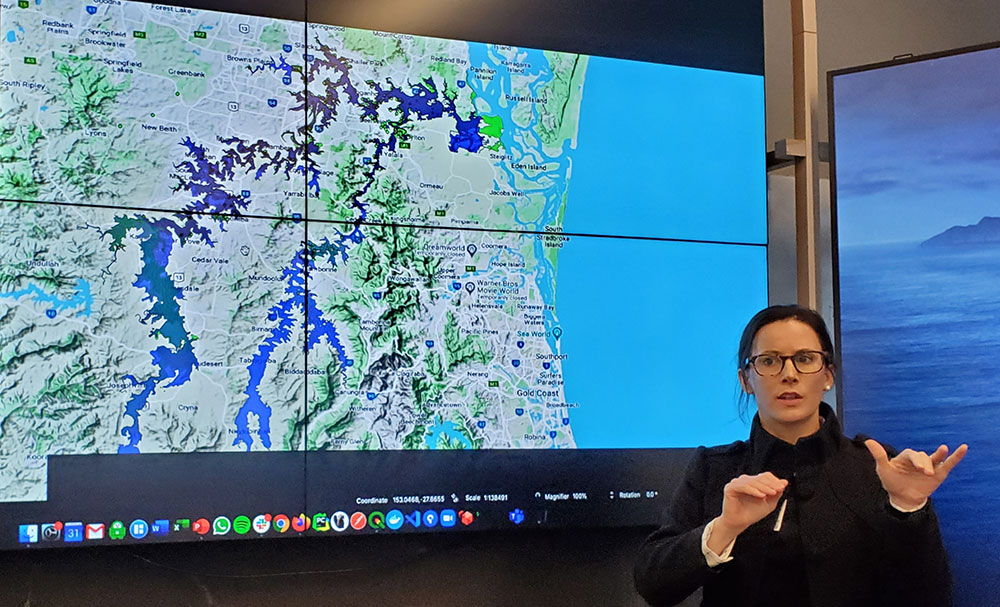 An obsession with saving lives

Starting as a Water Resources Engineer for Golder Associates in Australia and Canada in 2007, Murphy, who graduated from the University of Queensland with a Bachelor of Engineering (Hons) in 2008, has had a career-long interest in hydrology and flooding.

“I have always been fascinated by weather and storms,” she said.

“I saw the devastation of floods firsthand in the 2011 Queensland floods and in Calgary, Canada, in 2013.

“A friend lost everything when floodwaters reached the peak of her roof and the cleanup was so horrific I felt that, as a water resources engineer, we could do better.”

“A friend lost everything when floodwaters reached the peak of her roof. As a water resources engineer, I thought we could do better.”
Juliette Murphy MIEAust

Murphy added: “State and Federal agencies had good solutions for hydrology flood forecasting, but unfortunately a peak flood height was useless to people who didn’t know their property height or elevation, or the hydraulic slope.

“At the same time, it was possible to use an app like Uber to see a car coming to your door on a map.”

She partnered with Ryan Prosser, a software engineer with experience in scalable infrastructure, to launch FloodMapp in 2018, with a vision of saving lives.

In the future, the FloodMapp team believes the AI-driven technology may be relevant in assessing water shortages based on stream flows and heights, as well as assisting with the management of weather events such as hurricanes or bushfires.

“But the possibilities for machine learning models across a broader spectrum, to predict how areas get impacted and inform decision making, are only beginning to expand.”