This electronics engineer is giving sensation to synthetic skin

The idea of engineered skin that can “feel” sensation, such as heat, cold and pain, has long seemed out of reach. However, under renowned electronics engineer Professor Madhu Bhaskaran, it’s fast becoming a reality. The potential applications are promising.

Originally, Professor Madhu Bhaskaran and her colleagues at the Functional Materials and Microsystems Research Group at RMIT University were working on stretchable electronics. They wanted to create electronics that would not break when they’re dropped, bent, stretched or worn.

“People are imagining placing electronics on their skin or on their clothes,” said Bhaskaran, the Co-Leader of Functional Materials and Microsystems and Node Director and Chief Investigator with the Australian Research Council (ARC) Centre of Excellence for Transformative Meta-Optical Systems.

“So if you’re going to wear your electronics, they need to be there but almost unnoticeable, right? You shouldn’t feel yourself wearing it. It should conform and be very comfortable.”

Their work into wearables has developed into a quest to create artificial skin: they have invented electronic material that can “feel” sensation, including pain.

The material is made from thin silicone rubber and has the texture of skin. It can also sense pressure and heat. This ability to “feel” comes from a series of sensors on the outer layers of the silicon. Between the layers are flexible electronic circuits that interpret the data from the sensors and send messages onwards.

When our skin senses intense heat from a flame, for example, it sends a message to our brain telling us to withdraw, to pull away from the danger. This artificial skin might one day be able to do the same for somebody wearing a prosthesis.

The artificial skin can be programmed to only react when a stimulus reaches a certain level of intensity, meaning it won’t send false alarms.

“This is the brain-mimicking aspect,” Bhaskaran said. “But also, if you want to increase or decrease the sensitivity of the skin, you can do that too.”

That feature also means the artificial skin can help its user sense the difference between gentle and firm pressure — the hold of a child’s hand versus a vice grip, the sensation of picking up a soft piece of fruit versus grabbing a hot handle of a saucepan. These are all extremely useful functions for users of prostheses.

“If you’re going to wear your electronics, they need to be there but almost unnoticeable.”
Professor Madhu Bhaskaran

One is in materials, to make them stronger and lighter. Another is in battery technology, to better enable “bionic” functions. And a third is in articulation, to duplicate complex movements — of a hand, for example — in a realistic manner. Bhaskaran’s technology could assist with this third function.

“Sensory reinnervation will be the next step in the ability to provide intuitive control of a prosthesis,” Gow said.

“Currently, the user needs to use auxiliary methods to sense, feel and use a prosthetic device … The sensory reinnervation of artificial skin would recreate a feedback loop to allow intuitive control of a prosthetic without visual input.”

Her PhD explored the development of materials that make electronics more energy efficient. She then began post-doctoral studies in the field of piezoelectric materials.

Piezoelectricity is electricity generated from pressure. Bhaskaran was looking into how it might be used to power a pacemaker using blood pressure or a keyboard by generating electricity through keystrokes.

Then came conformal or stretchable electronics.

Her work has been recognised and awarded far and wide. Bhaskaran has held an ARC Australian Postdoctoral fellowship for her work on ultra-high response, piezoelectric thin films for efficient energy harvesting, and an ARC DECRA — Discovery Early Career Researcher Award — fellowship for a project incorporating flexible, transparent oxides into wearable sensors.

She is the first woman to be awarded the Batterham Medal, a prize for engineers under 40 administered by the Australian Academy of Technology and Engineering. Bhaskaran was also nominated for and won the prestigious APEC Science Prize for Innovation, Research and Education — known as ASPIRE — in 2018.

Another exciting application for her technology, Bhaskaran said, is wearable electronics.

“I would imagine something very similar to having a network of various sensing elements on a glove, which itself feels like skin,” she said.

“Think of surgeons when they’re touching human tissue. The smart gloves they’re wearing could help them identify whether it’s cancerous or non-cancerous tissue, or identify some other disease, allowing real-time diagnoses. This smart glove could allow the surgeon to still have a skin-like experience, but one that protects them and that makes the surgery smarter and more efficient.”

There’s a lot of work to do before the practical applications of such technology can be fully realised, Bhaskaran said. She estimates it will be five to 10 years before it is a commercial reality.

In the meantime, she and her colleagues are covering all the bases to build the knowledge that will be required, and more.

“If you want to increase or decrease the sensitivity of the skin, you can do that too.”
Professor Madhu Bhaskaran

“We have three parallel streams of work. We have a large research group working on brain-mimicking electronics — trying to create a brain on a chip,” she said.

“Another sub-theme looks at flexible electronics, which is where this skin functionality has come from. A third theme is around developing temperature-sensitive coatings, leading to applications such as coatings for smart windows that react to heat and cold.

“I don’t think we could have developed this artificial skin any earlier than we did, because we had to wait for all three technologies to reach that point where you could pick them up and integrate them together. Now, we’re almost there.”

Prosthetics are not the only potential home for Madhu Bhaskaran’s technology. Robots can be made far more human if they develop a sense of touch, said Professor Michael Milford, mechanical engineer, roboticist and Acting Director of the Queensland University of Technology Centre for Robotics.

“My entire career has been based around biologically inspired robotics,” said Milford, another recipient of the Batterham Medal.

“A lot of the inspiration has been based on the human brain. It’s a neuroscience inspiration, trying to create robots that are smart and think more like humans. I see the sensation of touch being intellectually one of the new frontiers in robotics and, practically speaking, being one of the missing pieces.”

Looking at technologies developed for robotics and artificial intelligence, where sensing is concerned, the vast majority of work so far has concerned camera vision, Milford said.

But while our sense of sight is our dominant sense, it’s also inherently limited. Touch is a powerful sensation in many ways and for many reasons, and it’s an area that hasn’t been explored in robotics.

“How do you create electronics that do not break, that are transparent, and which still retain very high functionality?”
Professor Madhu Bhaskaran

“Robots need to work around us, in our home lives and our workplaces,” Milford said.

“Current robots are going to fundamentally physically interact with the world in a very different manner to how we do because of their lack of any sophisticated sense of touch.

“There’s only so much you can do with a robot that sees the world only via a camera. Touch provides you with the ability to develop robot capabilities that you just can’t do with other sensing modalities.” 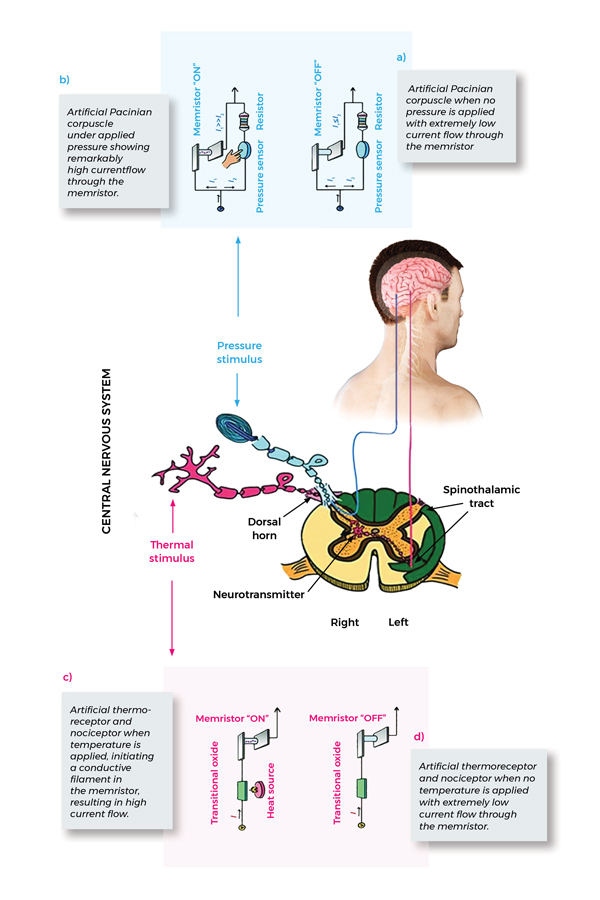 Electronic artificial skin has components that mimic human skin’s responses. These replicate organic skin’s ability to react to external stimulus such as pressure or heat and relay a signal to the brain through the nervous system, as well as the brain’s decision-making ability allowing an appropriate response to the stimulus to be relayed back.