An innovation that can be found inside almost every electric vehicle has earned its inventor Dr Masato Sagawa the 2022 Queen Elizabeth Prize for Engineering.

Sagawa pioneered the development of the sintered neodymium-iron-boron permanent magnet, which is today found in everything from cars to mobile phones. It has also become increasingly important due to its use in renewable energy systems, such as wind turbines.

In the 1970s, the strongest permanent magnets were made from an alloy of samarium and cobalt, an expensive and rare material that restricted mass production.

Recognising that a cheaper alternative was needed, Sagawa’s breakthrough came in 1982 with the creation of a new compound. The electrical engineer replaced cobalt and samarium with more abundant iron and neodymium, and added boron to raise the Curie temperature, the point at which the material is magnetic.

“The supply [of cobalt] was very unstable,” Sagawa said. “I thought why not use iron instead, which could give a better magnetic property to the overall magnet.

“If you compare cobalt and iron, if you look at the smallest unit of magnetism — what we call the magnetic moment — cobalt is only 70 per cent of iron.” 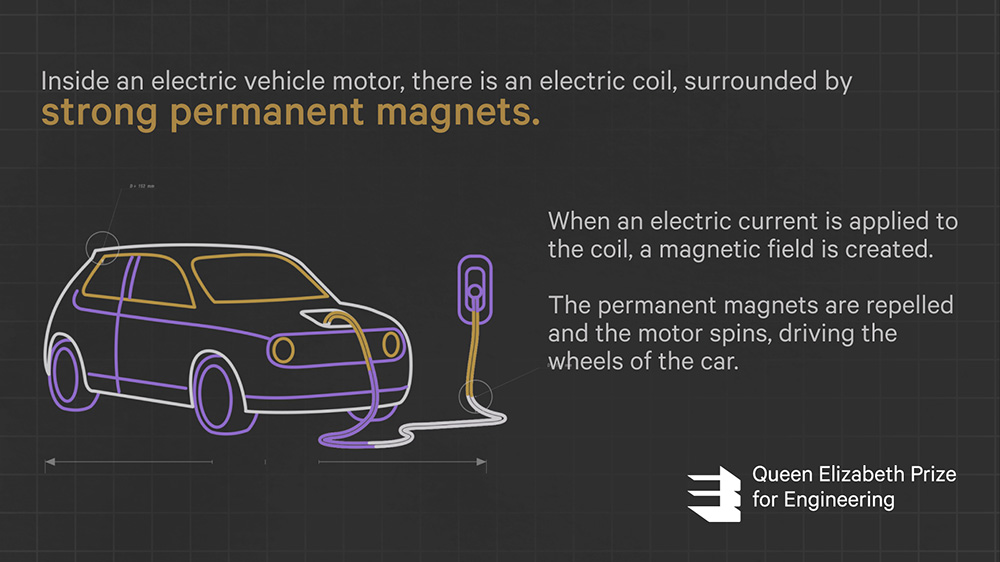 But discovering the compound was just the first step. Sagawa continued to refine the rare-earth magnet in the 1980s and early 1990s, adding dysprosium to improve heat resistance and overcome the issue of a reduction in magnetic coercivity at high temperatures.

He went on to develop a manufacturing technique to successfully commercialise his innovation, using a process called sintering. The metal alloy is powdered, the powder is compacted into shape and magnetised, and the material is compressed and heated.

The result was a magnet that almost doubled the performance of samarium-cobalt magnets and turned Sagawa’s invention into a viable product with wide ranging applications.

It is ideal for use in high-torque density applications, for example in electric vehicles, and in instances where small yet powerful magnets are required, including robots, MRI scanners and in domestic appliances such as washing machines and vacuum cleaners.

QEPrize is ‘what engineering is all about’

Known as the “‘Nobel Prize for engineering”, the QEPrize is awarded annually to celebrate the critical role engineering plays in society. The winner receives a cheque for £500,000 (AU$950,000).

A panel of 15 engineers from around the world make up the judging panel, including Engineers Australia Honorary Fellow and Chartered engineer Dr Alan Finkel AO HonFIEAust CPEng. He said it was an exciting task to choose between the best of the best.

“Ultimately you get challenged to make that call between extraordinary inventions from extraordinarily capable engineers,” Finkel said.

“It’s tough, but exciting. We are seeking to find the best engineers in the world who are producing globally relevant and ground-breaking technologies.”

“The purpose of engineering is to benefit humankind, and this award inspires engineers to keep working towards their goals.”
Dr Masato Sagawa

Sagawa said the prize “encapsulates what engineering is all about”.

“The purpose of engineering is to benefit humankind, and this award inspires engineers to keep working towards their goals,” he said.

“Engineering is essential to solving today’s most pressing issues, and this includes tackling climate change. While neodymium magnets have a wide range of applications, one of the most important is its use for climate economy products, such as electric vehicles and wind turbines.

“I am therefore honoured to be part of the engineering profession’s contribution towards the fight against climate change, and equally as honoured to receive this unique prize.”

Now retired, Sagawa works as a consultant for Daido Steel, where he is putting his latest technology — which improves magnetic energy density and reduces the use of dysprosium — into industrial production.

Previous QEPrize recipients have included the engineers who helped develop light-emitting diode technology, the minds behind GPS and the inventors of the Internet.

Sagawa will be formally honoured at a presentation ceremony later this year.