Engineers are working on wireless charging for electric vehicles

Engineers are pioneering an innovative approach for the wireless charging of electric vehicles, autonomous forklifts and other mobile machines, while they remain in motion.

Researchers from Cornell University in the United States have pioneered an approach — first brought to life by Nikola Tesla more than a century ago — to enable wireless charging of electric vehicles (EVs) and other robotic machines while they remain in motion.

“We built on the concept proposed by Nikola Tesla for wireless power that would transfer energy via alternating magnetic fields or electric fields,” Afridi said.

“For a long time, the electric field version didn’t get any attention because it is so much harder to do, especially when the distances involved are large and the power levels high. But in the 2000s engineers started looking at electric field based wireless power transfer again, initially to power semiconductor chips layered on top of each other, where the distances are small and the power levels low.”

Decades in the making

The high-power capacitive wireless charging system Afridi’s team designed features two insulated metal plates on the ground, connected to a power line through a matching network and a high-frequency inverter, which creates oscillating electric fields that attract and repel charges in a pair of matching metal plates attached to the underside of a vehicle.

This in turn drives a high-frequency current through a circuit on the vehicle, which rectifies it. The rectified current then charges the battery.

“Magnetic field based inductive wireless charging was considered the only hope for EV charging, and work on this approach had been ongoing since the 1970s.

“The common belief that electric fields would not work was based on the low permittivity of air compared to its permeability. Essentially, it is easier to generate a larger magnetic flux from a given current than it is to generate electric flux from an equivalent voltage,” Afridi said.

“However, in a wireless power transfer system, it’s not the strength of the flux that matters, it’s how fast the flux is changing that matters.

“The gap we needed to bridge in terms of the natural advantage afforded to magnetic fields due to the difference between the permeability and permittivity of air was a whopping 140,000, or over five orders of magnitude. So electric field based systems have to operate at much higher frequencies to bridge this gap,” he added.

“We built on the concept proposed by Nikola Tesla for wireless power that would transfer energy via alternating magnetic fields or electric fields.”
Associate Professor Khurram Afridi

As an undergraduate at the California Institute of Technology, Afridi had worked at the NASA Jet Propulsion Laboratory on the design of the 8- and 32-GHz transmitter of the SURFSAT 1 satellite. This inspired him to focus his subsequent research on very high frequency power electronics.

“But the key to realising Tesla’s vision of electric field based wireless charging, 120 years after his initial experiments, was by making high power electronic circuits switch efficiently at tens or hundreds of megahertz.”

“Electric fields start at positive charges and terminate on negative charges, confining them between the transmitting plates on the road and the receiving plates underneath the vehicle — so there’s no looping back through the vehicle even without any shielding materials,” Afridi said.

“This also allows you to go higher in frequency, and if there is metal around, the fields don’t create any heating.”

The third big advantage of electric fields is that, unlike magnetic field based systems, which require perfect alignment to charge, electric fields track the opposite charges on the vehicle and therefore deliver energy to a vehicle over a much greater range.

“This means that you can deliver energy to vehicles while they’re moving, before and after they’re on top of the system,” he said.

“However, developing electric field based EV wireless charging systems is super challenging — you have to get to a very high frequency.”

“An area with significant potential is charging mobile robots in warehouse and factory environments, such as an Amazon fulfilment centre.”
Associate Professor Khurram Afridi

“We had to develop switching systems that could run at a very high frequency without overheating the system itself, and invent novel matching networks to overcome parasitic capacitance,” he said.

Another major innovation was the active variable reactance rectifier to further increase the range over which power can be delivered to moving vehicles.

The Cornell team has received funding from government agencies and corporations to continue improving the technology and apply it to other fields.

“An area with significant potential is charging mobile robots in warehouse and factory environments, such as an Amazon fulfilment centre,” Afridi said. “On-the-move charging can reduce the battery required in the robot and allow the robot to work all the time.” 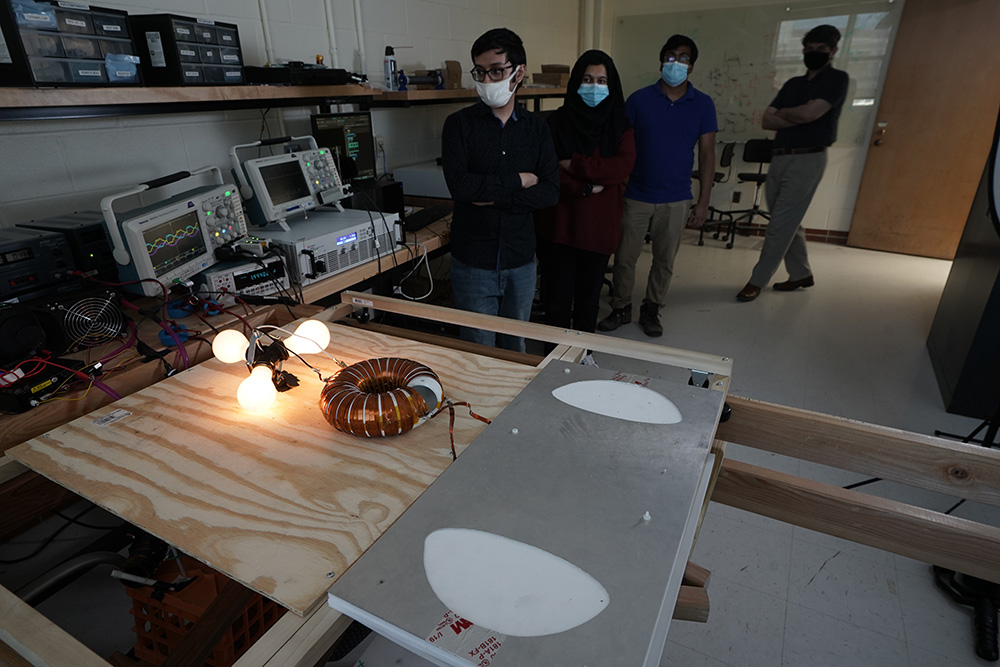 Afridi added that his team will keep pushing the boundaries of frequency to achieve higher performance — what is needed is the development of devices that can switch faster, and power converter circuits that can extract the maximum benefits from these fast switching devices.

“There are also applications of this technology in underwater, airborne and space systems, as well as powering biomedical implants like an artificial heart — obviously, you can’t have wires sticking out of people,” he said.

Dr Roger Dargaville, Deputy Director of the Monash Energy Institute, believes Afridi’s research is exciting and will no doubt have many important uses, given it can be proven to be technically and economically viable. But there remain a number of challenges to be solved in terms of any form of charging before mass uptake of electric vehicles.

“If EV charging is done in a clever way, then it can be actually really useful to the grid. But if it’s done in a poorly planned way, it can be really detrimental,” he told create.

“It’s important for us to have the right incentives and regulatory frameworks in place so that EVs are charging in a way that is not putting additional load on the electricity grid at times when the grid is most stressed.”

Afridi’s wireless charging could make it easier to power EVs while in motion, but a key problem with this could be that it will increase load on the electricity network during peak times.

Instead, it is preferable that EVs take advantage of cheap solar power at off-peak times, such as when they are typically parked during the day. One exciting proposal is to build EV-ready ‘park and ride’ schemes, which allow commuters to drive to a train or bus station and take public transport for the remainder of the journey.

“We’re continuing to research the best times for the EVs to be charging in terms of solar and wind power, and what kind of incentives you would need to provide to EV owners so they would be willing to give up some control of their EVs so that the battery is charged when it’s good for the grid rather than bad,” Dargaville said.

Mass EV charging is an issue that is going to require a number of complex engineering solutions.

“It’s a very data rich problem — in the future, we could be talking about charging 20 million EVs in Australia, all trying to communicate with the grid and work out the best charging strategy,” he said.

“That’s a very large optimisation problem to solve, so the Internet of Things and big data becomes a really important part of solving the problem.”

Sensing seizures: This engineer is making it easier to diagnose brain disorders

How this engineering firm is taking action to increase Aboriginal participation

How this engineering firm is taking action to increase Aboriginal participation